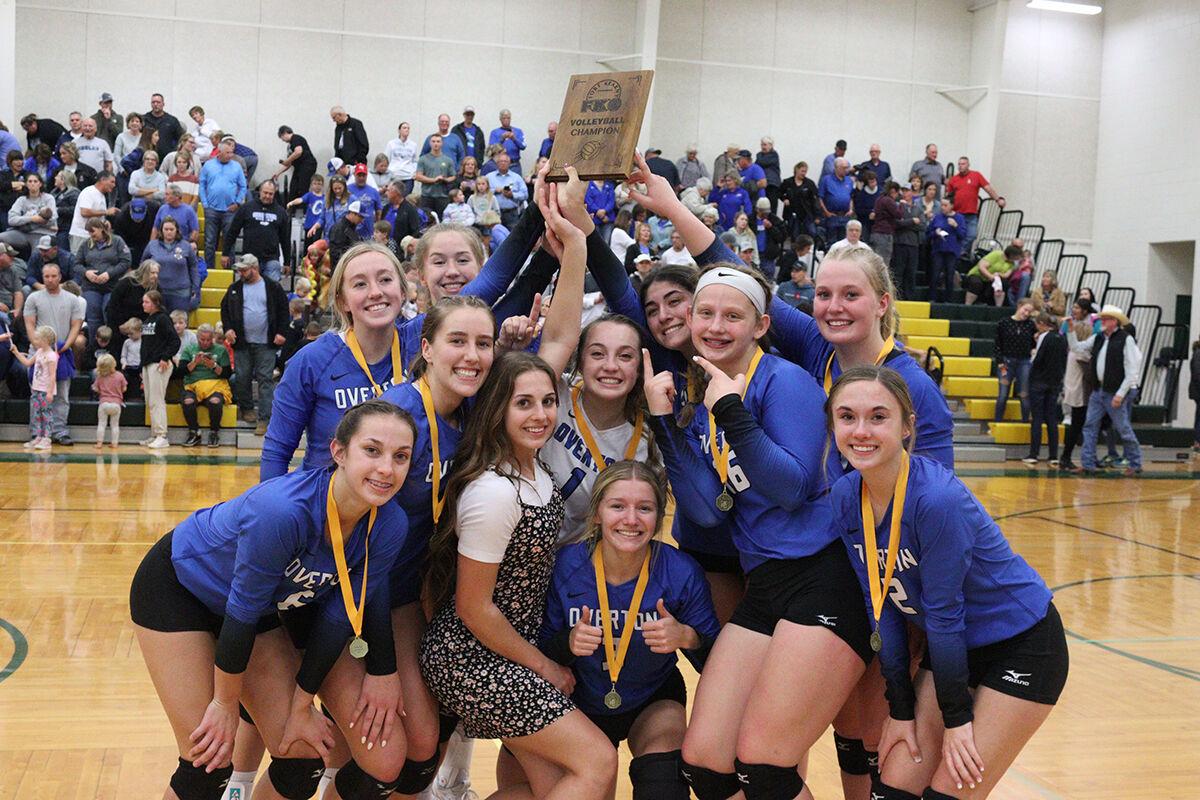 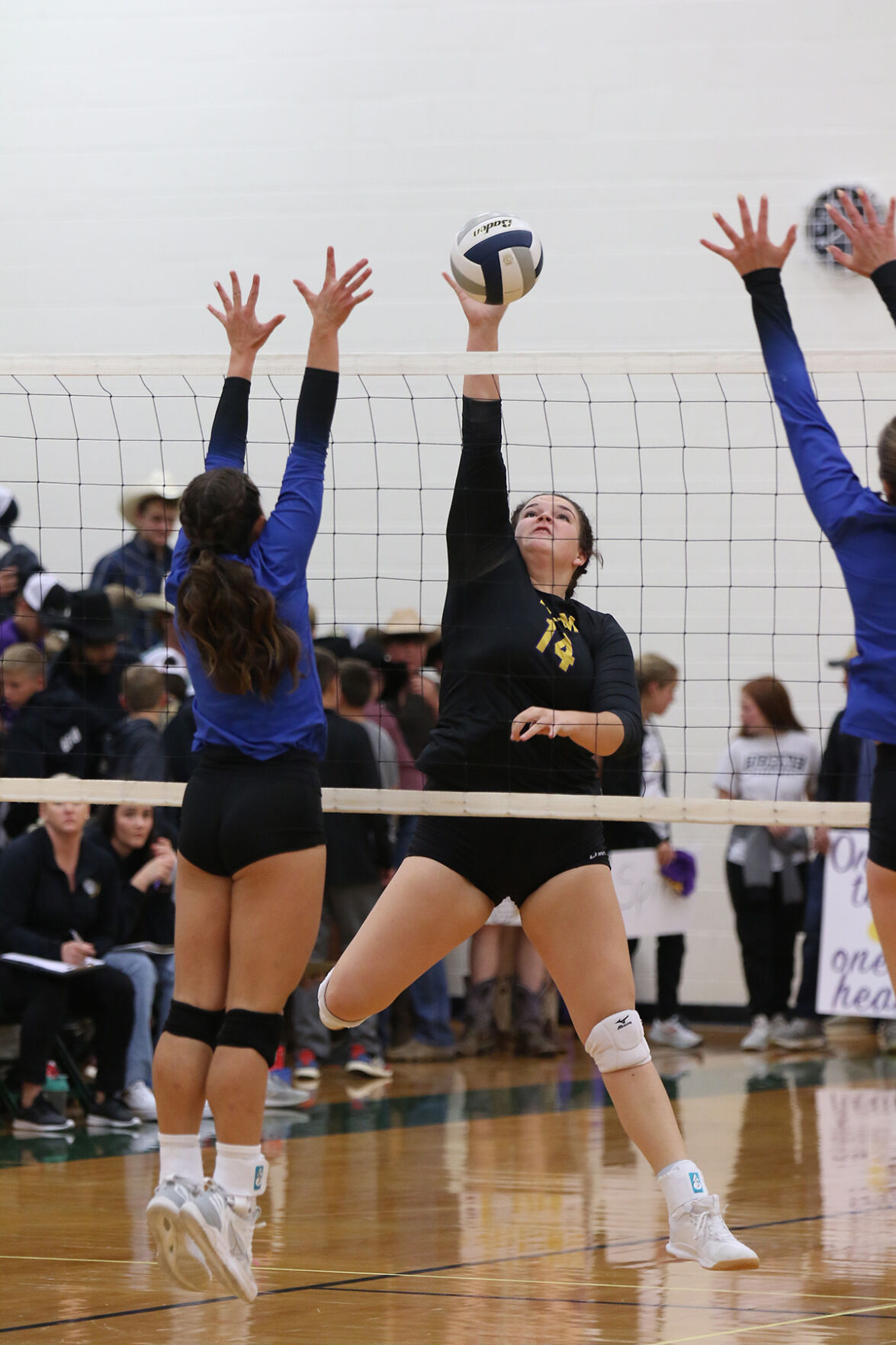 Audrey Reiter (14) goes to hit the ball into Eagles territory. 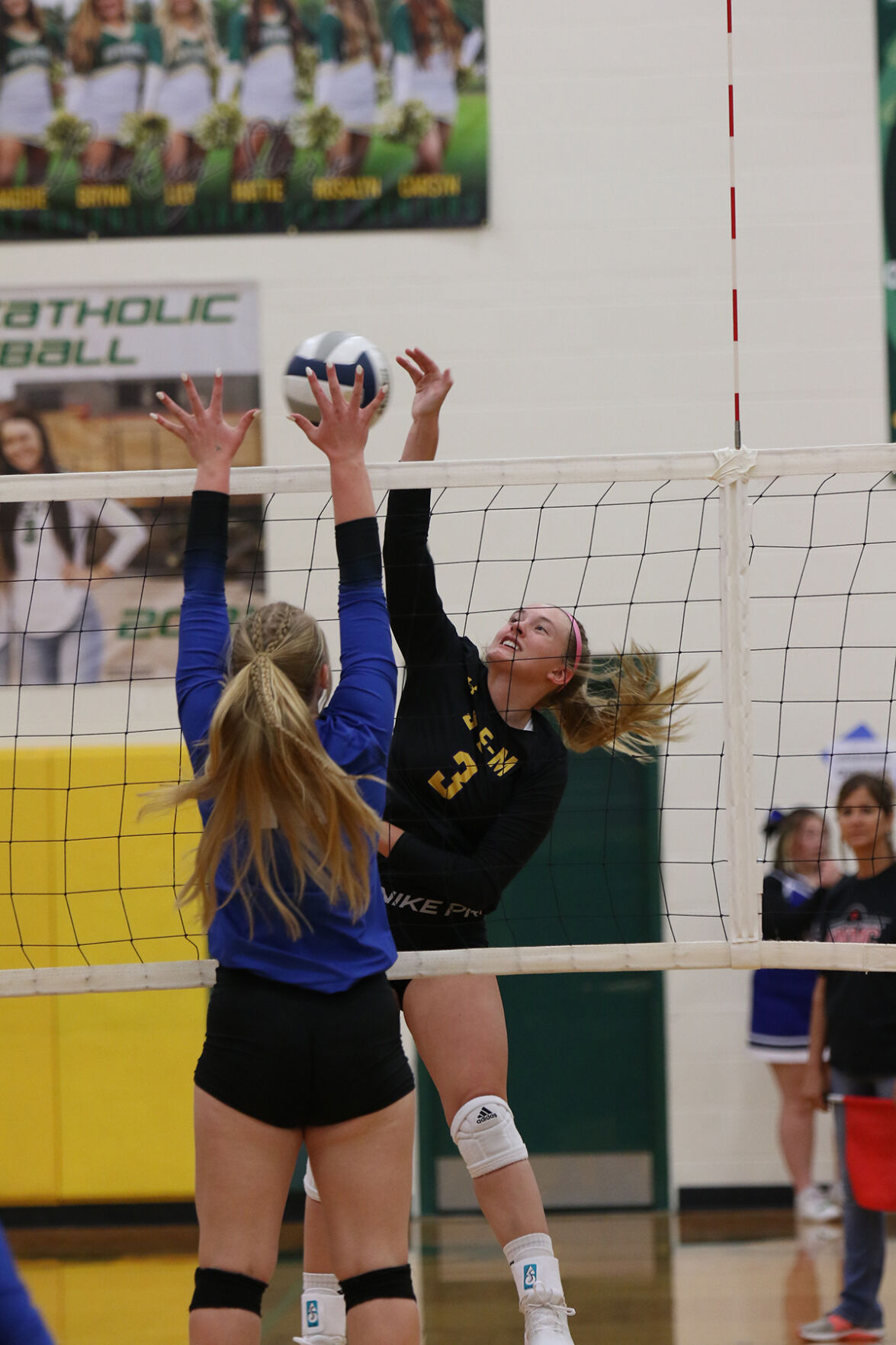 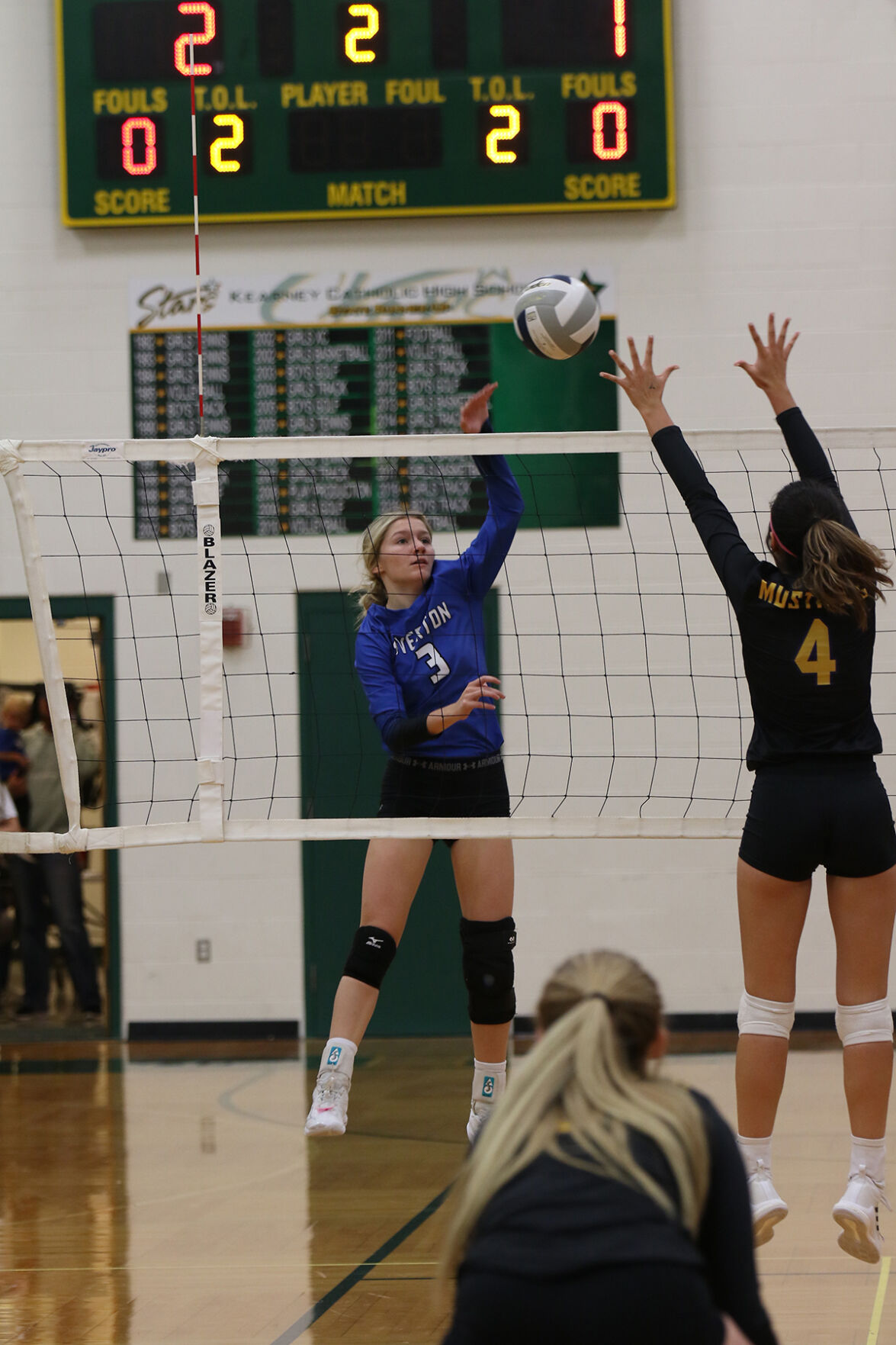 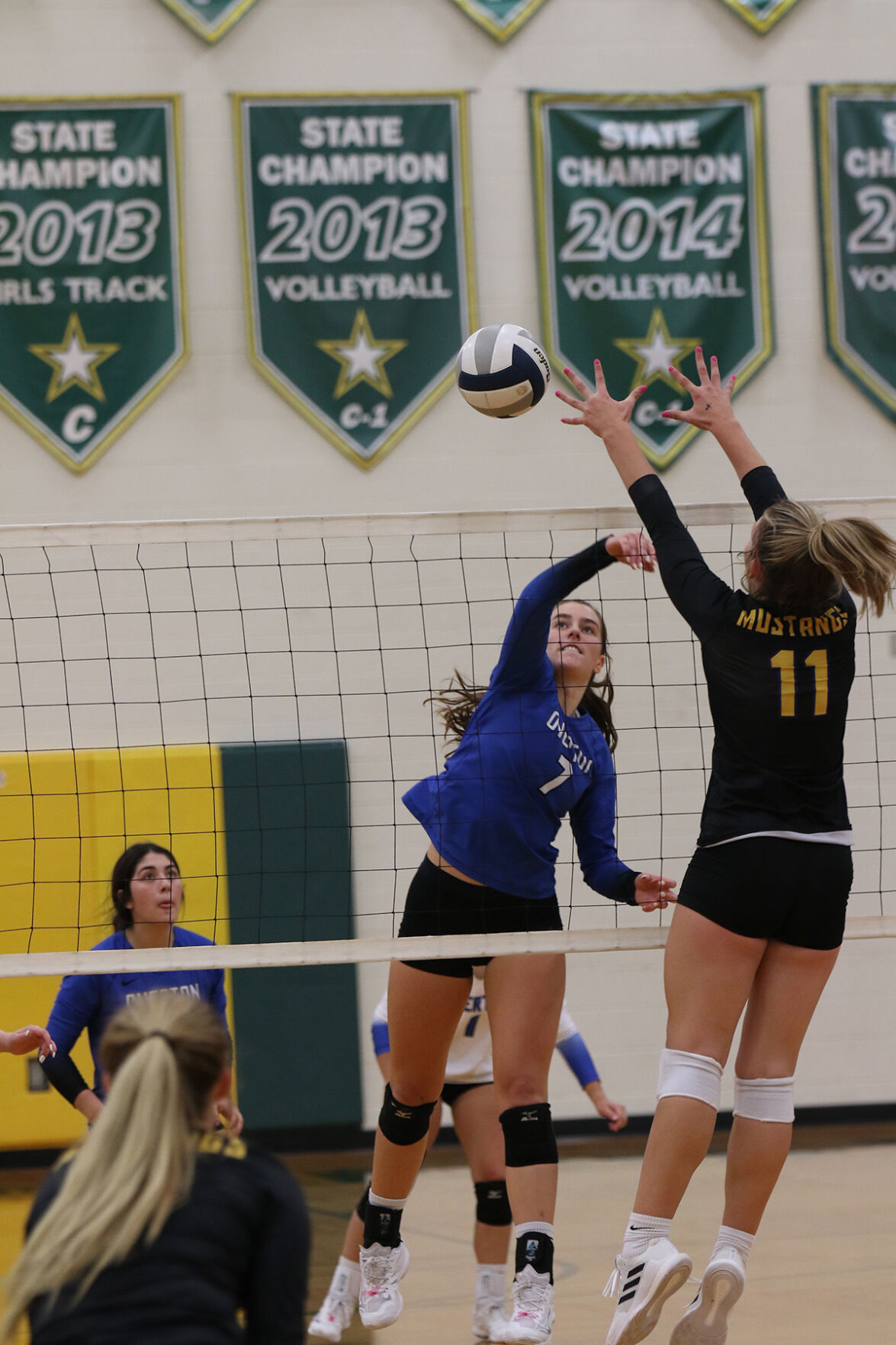 Overton's JoLee Ryan (7) goes for a kill as SEM's Mikah O'Neill goes for a block. 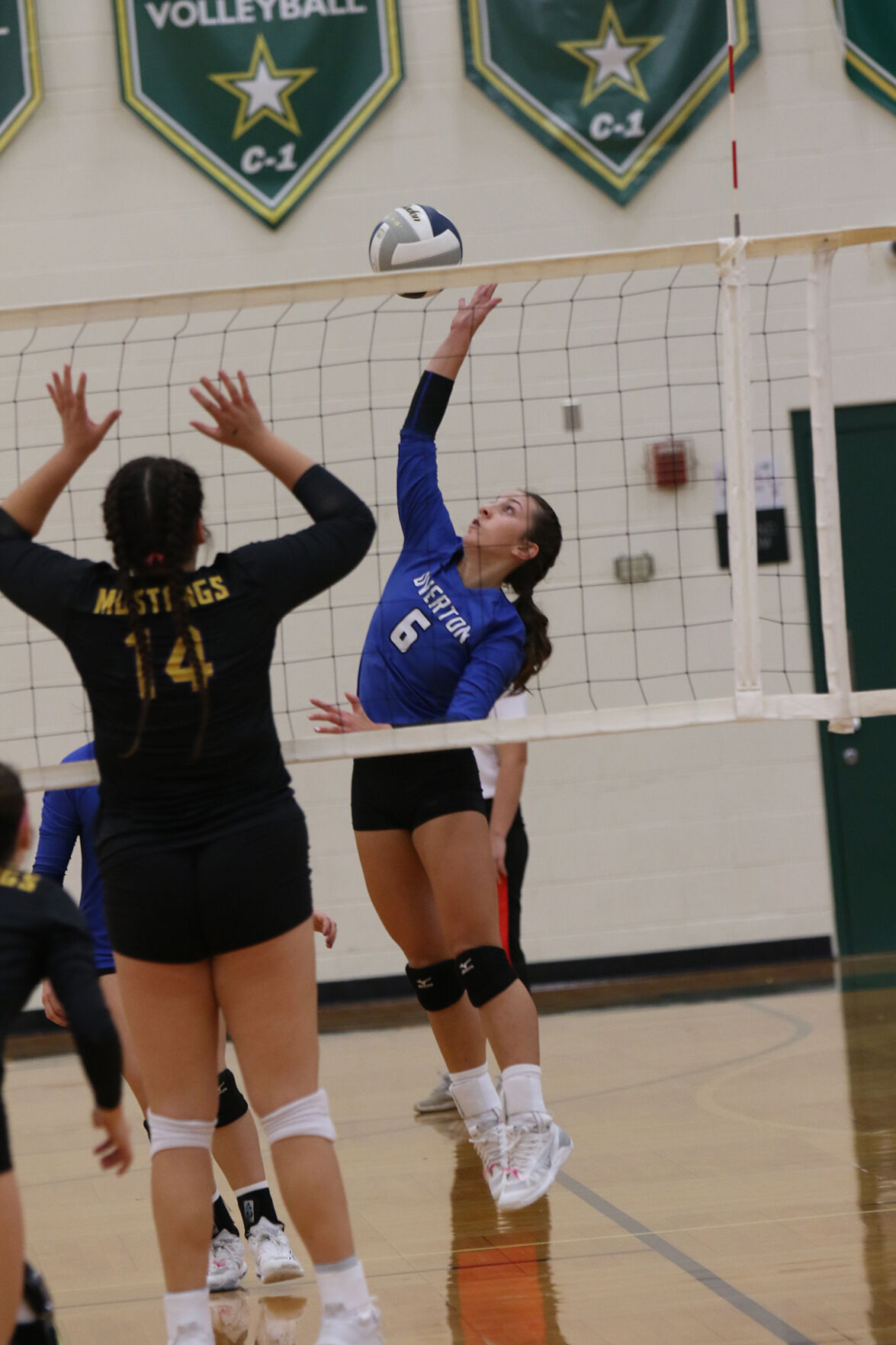 Overton's Gracyn Luther (6) goes for a hit as SEM's Audrey Reiter (14) tries for a block. 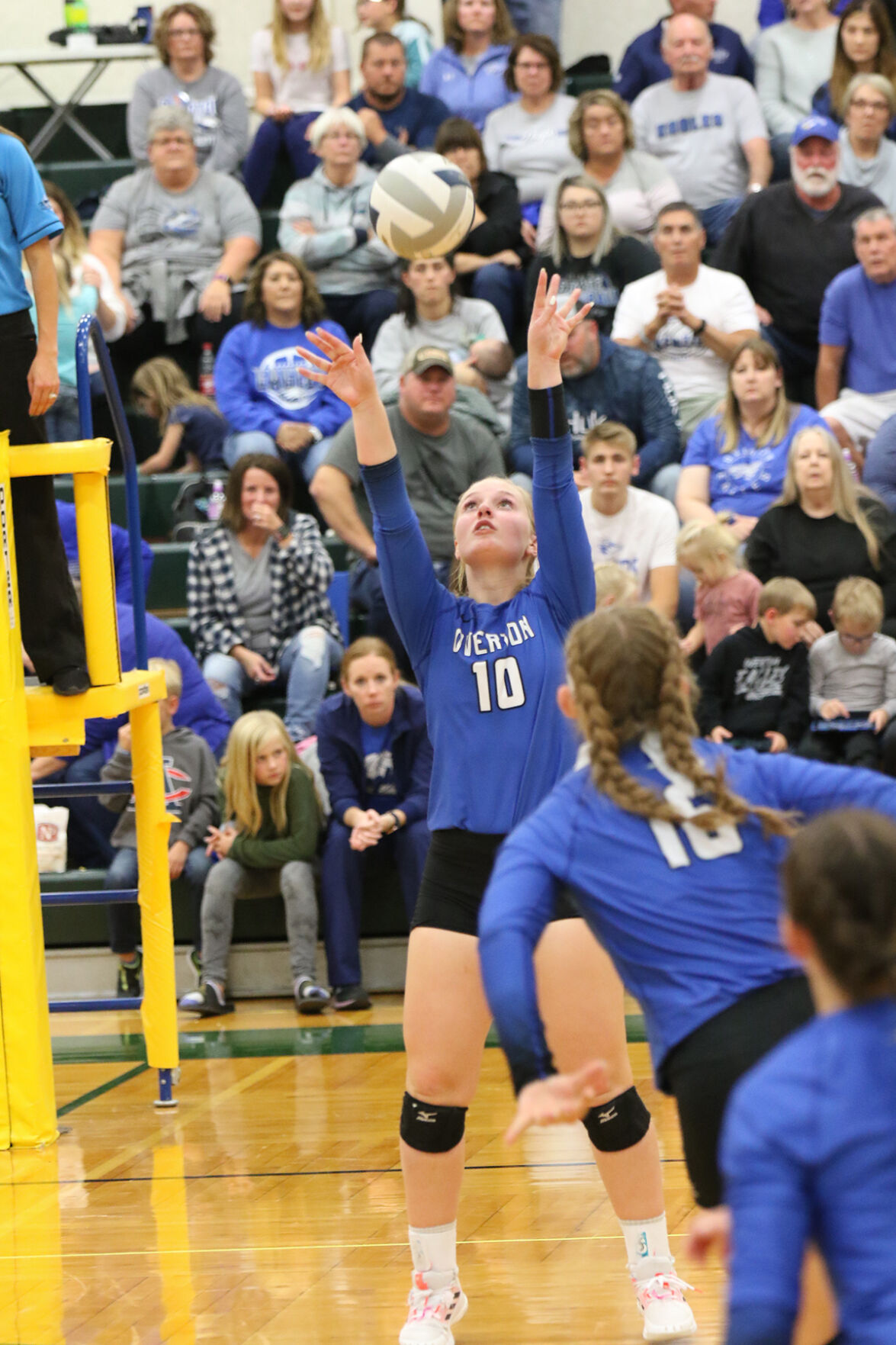 Ashlyn Florell (10) sets the ball during one of the matches against SEM. 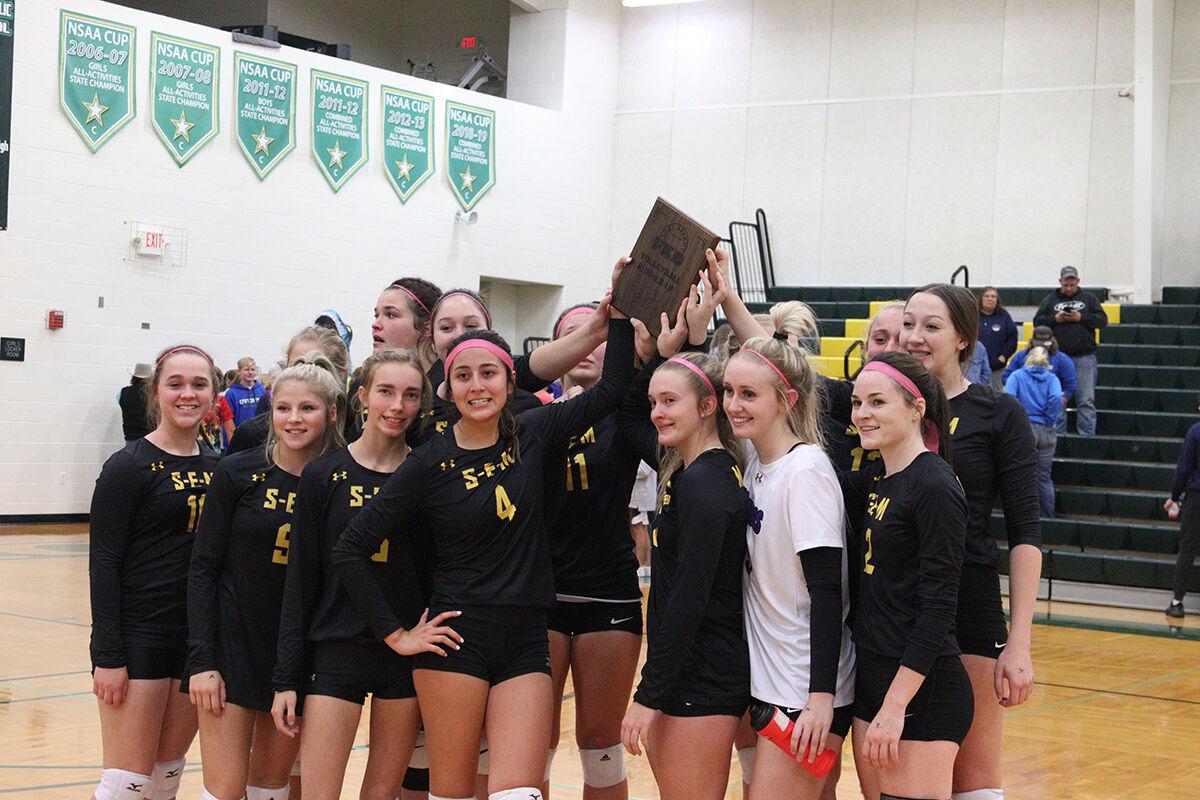 The SEM Mustangs earned second place in the FKC Championship.

The Eagles had the experience, playing in the last five Fort Kearny Conference Tournament championships.

They had a chip on their shoulder, having lost the last four.

And they played better than S-E-M, playing for its first conference title since before any of this year’s players were born. “We were ready tonight to come out and play our best,” said Overton coach Hayley Ryan, who has led the Eagles to five FKC Tournament titles.

The Eagles showed their superiority early with the first four kills going to four different players. From there, Overton dominated, winning 25-19, 25-20, 25-19.

“What’s great about this team is ... we have five hitters. We have a solid team. And even with that (setter Ashley Florell) is stepping up and getting some setter dumps and they’re getting more comfortable doing things they were very uncomfortable doing before, so it’s exciting to see them come together like this,” Ryan said.

Overton (23-4) out-hit the Mustangs 42 kills to 27. The Eagles also had three players with more than five kills — JoLee Ryan with 17, Natalie Wood with 12 and Kenzie Scheele with eight — while S-E-M had one, Mikah O’Neill with 13.

“There’s a lot of positives to this. It was nice to come out and see them keep that momentum throughout the entire three sets,” coach Ryan said.

The Mustangs (20-5) had a brief flicker of hope in the second set. Trailing 15-11 they quickly tied the game with an O’Neill kill and three straight aces by Abbie Rohde, the last of which included an alignment error by the Eagles.

But four of the next five points were kills by JoLee Ryan and Overton was back on top.

It was frustrating ending for the Mustangs, who will have another chance at the Eagles as both are in the same subdistrict.

“Give credit to Overton. ... They did exactly what we did to Amherst last night. They placed their serves, got us out of system and we simply fell apart,” S-E-M coach Tammy Kenton said. “We didn’t do what they know they can do and, honestly, that has a lot to do with how good Overton is, also. We let them intimidate us.”

Overton’s players have known that feeling, losing the last four FKC title games to an excellent and intimidating Pleasanton team.

While no one on the Eagles’ roster experienced all four of those losses, they’ve grown up watching those defeats even if they weren’t playing or part of the program as student managers.

“They wanted it and I could tell after the game, when I saw Kenzie tearing up, just how bad she wanted it,” Coach Ryan said. “I just feel like everybody stepped up tonight. It was a total team effort.”

Chelsea Fisher and Regan Weisdorfer led the Bulldogs with 21 and 18 kills, respectively.

Tenley Hadwiger had 14 kills for Amherst and Hannah Herrick had 13.

LEXINGTON — The Lexington High School Fall Sports Recognition and Awards event was held on Monday, Nov. 6. Listed below are the letter winners…

About 14 Creighton basketball fans sat in the front row of the Husker student section. They were rewarded with the Jays' win and an offer of beer from the former athletic director.

One bad season at Florida was one too many for Dan Mullen.

After growing alarm over her safety, Chinese tennis player Peng Shuai took part in a video call with IOC officials, telling them she's safe and well.

LEXINGTON — “The wolf on the top of the mountain is not as hungry as the wolf climbing the mountain,” this was the Lexington Boys Cross Countr…

Audrey Reiter (14) goes to hit the ball into Eagles territory.

Overton's JoLee Ryan (7) goes for a kill as SEM's Mikah O'Neill goes for a block.

Overton's Gracyn Luther (6) goes for a hit as SEM's Audrey Reiter (14) tries for a block.

Ashlyn Florell (10) sets the ball during one of the matches against SEM.

The SEM Mustangs earned second place in the FKC Championship.