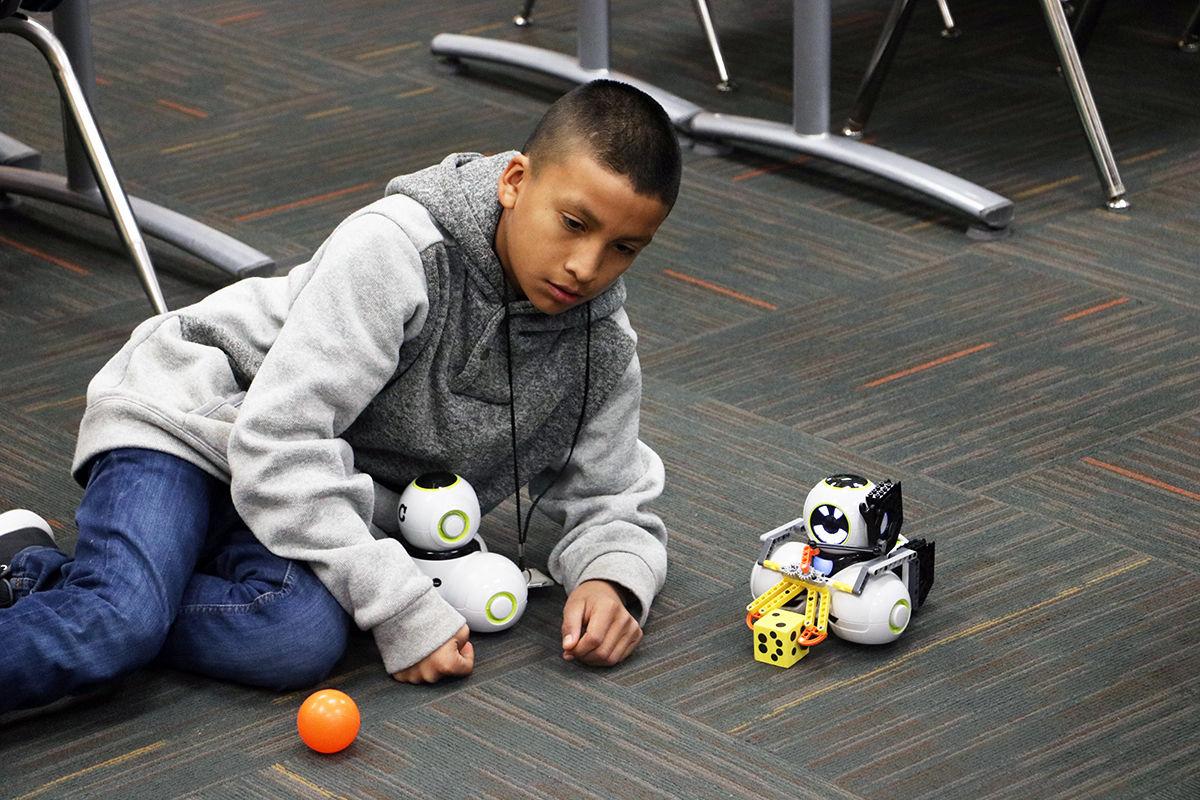 Lexington Middle School sixth grader Daniel Prado-Segura, along with two of his classmates, programmed their Cue robot to pick up items and move them. 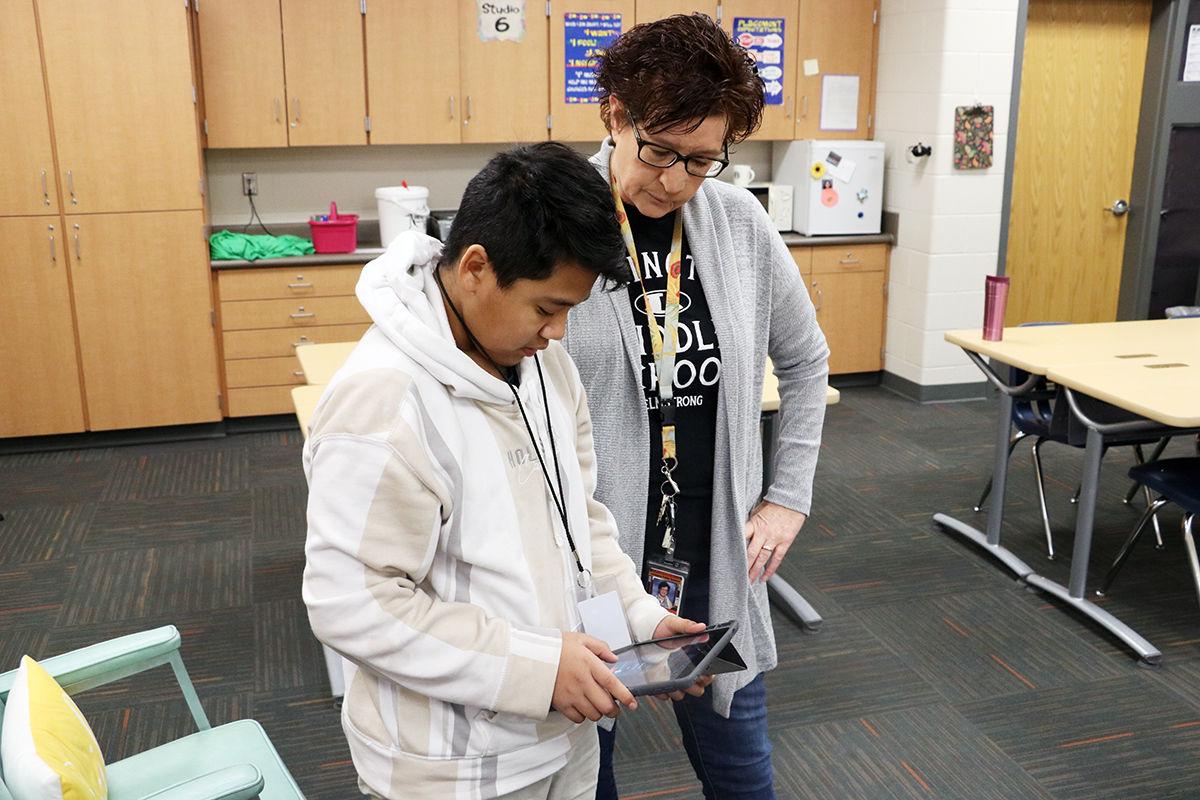 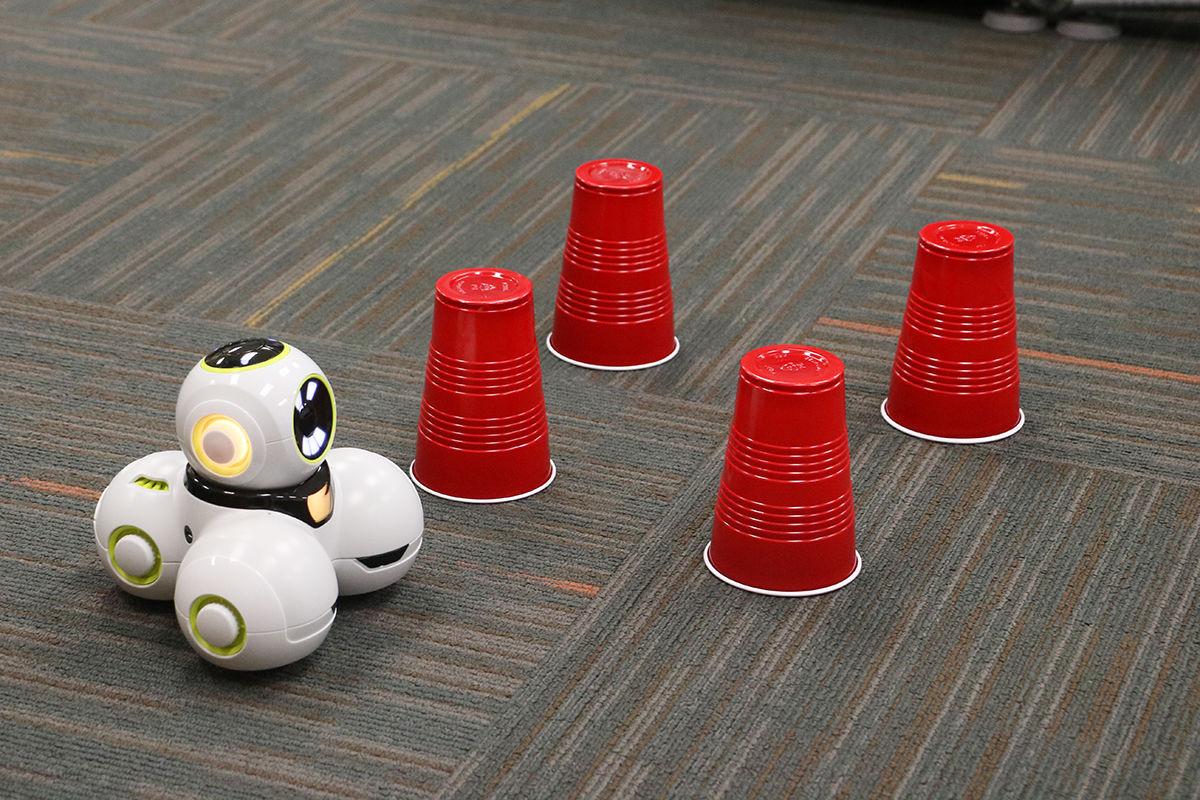 Sanchez was programming his Cue robot to circle a set of plastic cups set up in a square.

LEXINGTON — It’s a far cry from the typewriters and dot matrix machines which used to be the staple of classrooms, but robotic programming brought wonder and curiosity to a Lexington Middle School classroom thanks to a grant from the University of Nebraska at Lincoln.

Reading, writing and arithmetic have long been mainstays in education, but with the evolving technology of the modern day, UNL researcher Leen-Kait Soh thought it was time to bring more computer science opportunities to the classroom, according to a UNL press release.

Taking advantage of a four year, $2 million grant from the National Science Foundation, UNL is developing a program aimed at helping the state’s educators teach computer science to a diverse group of K-8 students, according to the press release.

"In Nebraska and many other states, there’s a lack of standardized K-12 computer science curricula and a dearth of K-12 educators equipped to teach the subject," according to the press release, "And for those who do teach computing in Nebraska, no specialized training is required, raising questions of quality and standards."

There were 29 teachers in the first cohort and each was given $1,500 which went toward conference travel or to buy materials like robots, according to UNL Assistant Director & Communications Coordinator Lindsay Augustyn.

The first cohort was made up of Lincoln teachers, and one Lexington Middle School teacher, Patti Maguire.

On Friday morning, Maguire’s sixth graders were on their fifth day of working with the Cue robots and she said they had spent the time learning to code and manipulate the robot to perform certain tasks, such as maneuvering around obstacles or pickup up items.

One student Anthony Sanchez, was trying to code his Cue ‘bot to maneuver around four cups which formed a square. Maguire explained the students could program the robot a certain direction and distance to travel.

Another student, Daniel Prado-Segura had attached grabber arms to his robot and had programed it to pick up items and move them to a different location.

Maguire said the robotic programming held the students put math concepts they learned abstractly in the classroom, into physical practice. Concepts like degrees such as 180 degrees or -90 degrees were important in the programming and allowed the students hands on experience with the ideas, Maguire said.

Programming not only brought math concepts into reality, but it also gave the students the opportunity to problem solve and troubleshoot.

"As they face challenges, they need to be problem solvers," Maguire said.

The programming promoted, "computational thinking, said Maguire, and the process encouraged students to break down the issue into parts and solve it step by step.

One of the most valuable lessons which the programming taught was failure. One time Sanchez’s robot went too far and hit the wall and Prado-Segura’s robot had trouble grasping a round object as opposed to a square one. Yet the students kept trying and worked to "debug their program," Maguire said.

Maguire said it was great to see, "wonder and curiosity," among the students during the week they had programming the robots.

In some ways the students took to programing like a fish to water. In an email to Augustyn, Maguire said she was instructing the students about the use of a function, and soon they were creating their own functions after only a single experience writing one.

The second cohort begins on June 8 in Grand Island where 23 teachers have signed up so far, the third cohort will begin in 2021 in Omaha, Augustyn said.

"Some kids, especially in urban areas, have access to computer science enrichment activities that happen outside of school," Nebraska Center for Research on Children, Youth, Families and Schools research professor Gwen Nugent said. "But to be able to exist in today’s connected world, all kids need to develop these computational skills early on in school."

LEXINGTON — As the calendar turns over to December, Lexington has a host of Christmas related events set throughout the month.

JOHNSON LAKE — Nebraska state parks will be offering a variety of events throughout the month of December. Find an event near you to celebrate…

LEXINGTON — As the discussion about the need for quality child care in Lexington was ongoing between community members, the need for an afford…

When they tested positive, their expected 12-day trip turned into an expensive, extended ordeal as they tried to navigate the various requirements to get back on an airplane and return to the U.S.

LEXINGTON — The Planning Commission forwarded their approval of a subdivision plan, that will allow Fat Dogs to add high volume diesel pumps, …

Judge Matthew T. Schelp of the Eastern District of Missouri granted the injunction against the Centers for Medicare and Medicaid Services.

The 24-year-old called Lincoln police at around 5 a.m. Wednesday and said his money, jewelry and shoes were stolen.

On Wednesday, Sheriff Terry Wagner told the Journal Star his office had reviewed video available from the scene and had interviewed both the involved trooper and a Lincoln Police officer who witnessed the incident.

"Our clients were told, 'Don't worry about it, she'll be OK.' She suffered profound seizures and will never be the same," attorney Joe Cullan said.

Lexington Middle School sixth grader Daniel Prado-Segura, along with two of his classmates, programmed their Cue robot to pick up items and move them.

Sanchez was programming his Cue robot to circle a set of plastic cups set up in a square.