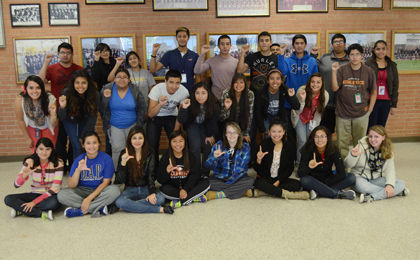 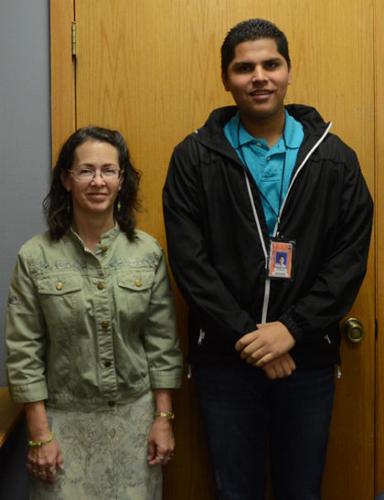 Quinonez, a senior student at Lexington High School, helped start an after school sign language club this fall, which has seen student participation explode. The club has about 60 members and is growing.

During a club meeting this Monday, members could be seen wearing club t-shirts with their last names on the back. Students took turns trying to remember what animal each student around the classroom had been assigned, communicating through sign language as much as possible.

“We’re learning 30 new things every Monday and we review. We want to have the club until the end of the school year,” Quinonez said.

So far, students in the club had learned how to sign numbers, letters of the alphabet, colors, months, days of the week and family members. They were working on animal signs this week – some of which, like the sign for the spider, where so expressive that even a lay person unfamiliar with sign language could figure it out. For example, the furry legs of a spider are indicated with dangling fingers.

“The club is very popular. Attendance is sporadic, students come when they can,” said Teri Griffith, advisor and sign language teacher for the club.

Griffith said the club allowed students to learn a new language that was exciting and something they had been exposed to when they see deaf students interact with others.

“This is where I started, this is where they get in the door. I hope they are excited enough to continue with it,” she said about starting out learning sign language.

Quinonez said he planned on pursuing his passion for sign language into college.

“I like doing it (signing). To see people get involved is great,” he said.

A new club at Lexington High School started this school year, the sign language club, has drawn wide-spread student interest. The club has about 60 members, it meets Mondays after school.

The Nebraska native has spent her whole life working hard, and it's all about to pay off in June when she receives her degree from Stanford University.

A total of 22 Nebraska high school seniors, but none from Lincoln, achieved the rare feat of a perfect ACT score this year.

A retweet from UNL Chancellor Ronnie Green persuaded Grady Johnson to idle the planter last Saturday and instead walk across the graduation stage at Memorial Stadium.

At the time of Russell Harms' trial, psychiatrists said he suffered from paranoid schizophrenia and at times from visual and auditory hallucinations.

The mission to show Tom Cruise a good time as he prepared to film "Top Gun" in 1985 fell to Lt. Walter E. Carter, Jr., known to his fellow naval aviators as Slapshot, and to the Cornhusker state as University of Nebraska President Ted Carter.

Ex-Nebraska prison employee goes to prison for smuggling in marijuana, contact with inmates

Tom Martin believes “life is a journey. You wait to see whatever you are asked to do, and you do it. It’s such an honor to be a teacher. You shut the door. You are the only one with them,” he said. That’s when, he said, the magic begins.

George B. Lake and Dr. George Miller had streets named for them during their lifetimes. They were commemorated again on a pair of west Omaha parkways. Schools and parks have also been named for them.

In a lawsuit filed in U.S. District Court on Monday, Thomas claimed a no-trespass order handed down to him from the district in September prevented him from experiencing his first grader's school year.

Earlier this month, the NWU Board of Governors approved a resolution to tear down the three-story facility at the corner of 50th Street and Madison Avenue in northeast Lincoln.