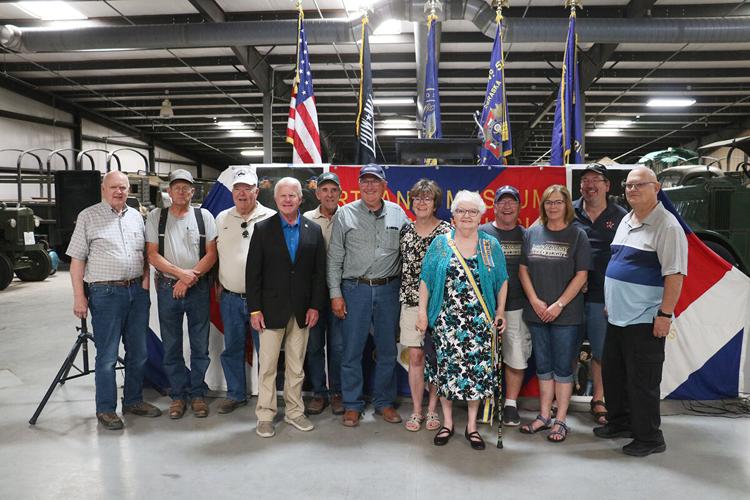 The Colonial Dames of the 17th Century honored the Dawson County Hero Flight and those who organized the six flights. Sherilyn Ward, fifth from right, presented U.S. Capitol flags to Steve Zerr, second from right and Max McFarland, sixth from left. 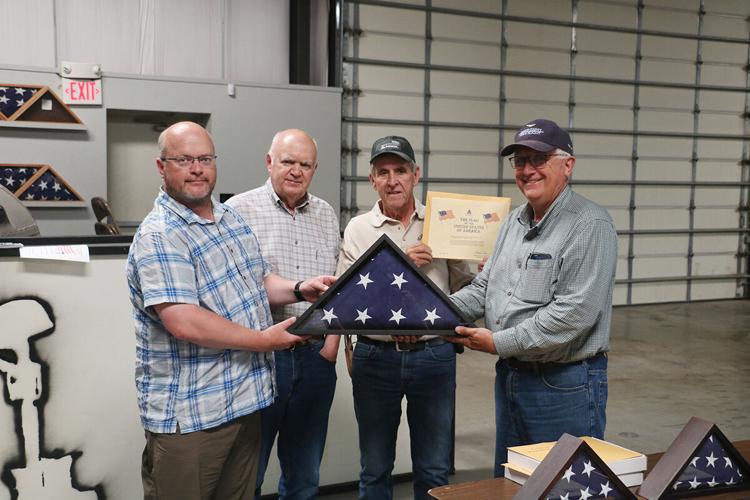 Max McFarland, right, is presented with a flag that flew over the U.S. Capitol during one of the Hero Flight visits to Washington D.C. in 2018. 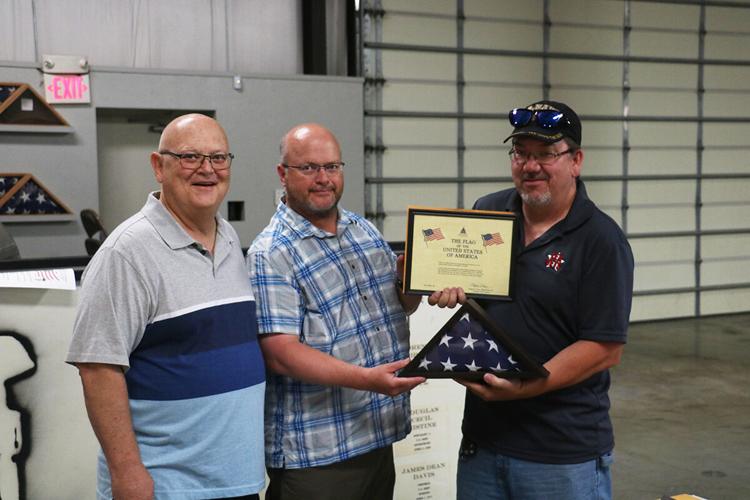 Dawson County Veterans Service Coordinator Steve Zerr, right is presented with another flag that flew in 2018 during a Hero Flight visit. 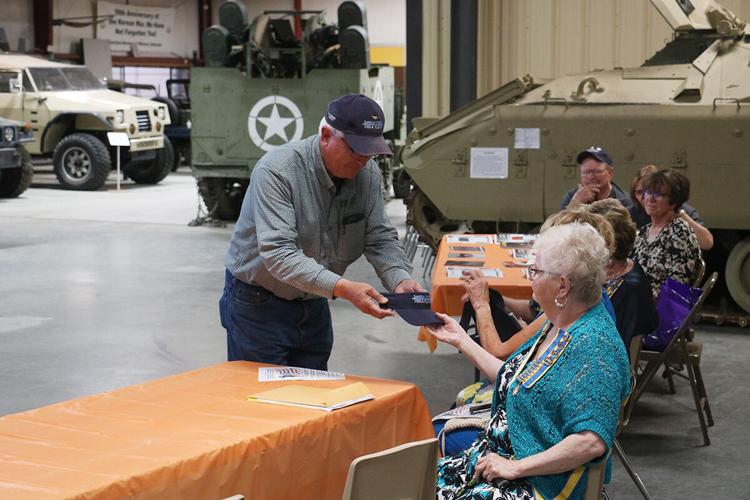 LEXINGTON — The Dawson County Area Hero Flight and crew members were honored by the Colonial Dames of the 17th Century with flags that flew over the U.S. Capitol building during their visits.

Zerr spoke about how the idea for the Dawson County Hero Flight got started after he became the Veterans Service coordinator in 2014.

Zerr said Korean War veteran Robert ‘Bob’ Fisher came into his office and inquired about the county doing a veterans flight to Washington D.C. that was similar to the one Buffalo County had been doing.

After a year in his position, Zerr began asking around for someone who could help coordinate and chair a committee for a Dawson County Hero Flight and this led him to Max McFarland.

Zerr said McFarland, “cannot be thanked enough,” for his work with the Hero Flight.

He also thanked all the other members of the Hero Flight committee who helped make it possible for area veterans to visit their memorials in the nation’s capital.

The next to speak was Sherilyn Ward, past president of the Colonial Dames and the one who was behind Sunday’s recognition of the Dawson County Hero Flight.

“The National Society Colonial Dames XVII Century is an organization of women, eighteen years of age or over, who are lineal descendants of an ancestor who lived and served prior to 1701 in one of the Original Colonies in the geographical area of the present United States of America,” according to their website.

Ward presented McFarland and Zerr with two flags that were flown over the U.S. Capitol building on Sept. 27. Their certificates read, “At the request of the Honorable Adrian Smith, member of Congress, this flag was flown on behalf of the Colonial Dames XVII – Nebraska who would like to show our appreciation to our Veterans – who served their country and were able to go on a Dawson County Hero Flight.”

Ward also announced that $900 from Otis Ward’s memorial fund had been donated to the Heartland Military Museum, the site of all the send offs for the Hero Flight.

In turn, McFarland presented Dawson County Hero Flight visors to the three Colonial Dames in attendance, Ward, Cheryl Clark and Marge Bader. McFarland said these hats were only presented to Dawson County veterans, their escorts and members of the flight crew.

Senator Matt Williams was invited to provide the closing comments for the event, he had attended all six send offs for the Hero Flight over the years.

Williams said he spoke with a veteran who went on the Hero Flight who was uncomfortable about being called a hero. The veteran had served his time state-side and didn’t feel like he should be called a hero.

He told the man that service to the country, in any capacity, is a sacrifice.

Williams also shared a personal moment he had when he was in Washington D.C. and was sitting at the Korean War Memorial, taking some time for deeper thought.

He said he could see the statues of the memorial reflected off of a nearby surface, intermingled in the scene were two children, playing with each other. Williams said those children could enjoy the simple act of carefree play, because of the veterans who had served and sacrificed for the country and their fellow citizens.

Williams also thanked the members of the Hero Flight committee who had helped to make this trip possible for all of the veterans. He said they stepped up and helped to make this considerable project happen. He closed saying it is great to dream, but in order for that to become reality, people need to take action.

During the event, McFarland gave an overview of the six Dawson County Hero Flights and the impact it had on the veterans who went on the flights.

The mission of the flights was, “to honor our veterans by flying them to Washington D.C. and enable them to visit ‘their’ memorials. Dawson County Area Hero Flight is organized for the sole purpose of honoring American veterans for all of their sacrifices and service above self.”

McFarland noted the differences in the Honor Flights, which is a national organization and take veterans on a 24 hour trip of Washington D.C. The local Hero Flight was a three day trip for veterans.

He noted they narrowed down participants to veterans of World War II, Korea and Vietnam.

Locally, there are around 1,486 veterans in Dawson County, 55 World War II veterans, 150 Korean War veterans and over 700 Vietnam veterans.

The Hero Flight began in 2015 and was organized by a committee of volunteers representing Lexington, Cozad, Gothenburg, Overton, Eddyville, Sumner and Farnam. They also became an affiliated fund of the Lexington Community Foundation and were supported by private donations.

Each of the six Hero Flights was comprised of 25 veterans, an escort for each, four committee staff coordinators, a nurse and a photographer. The cost of each flight was around $60,000 or $2,500 per veteran.

McFarland shared some highlights and moments he had witnessed on the Hero Flights.

Each Hero Flight began at the Heartland Military Museum with the formal send off by the community and they were all driven to Epply Airport in Omaha by a Lexington Public Schools charter bus and driver.

The TSA agents at Epply were always right at the bus door with wheelchairs to help assist the veterans and make the airport process smooth. McFarland said it never failed to impress when the Southwest Airlines pilot would announce the presence of the Dawson County Hero Flight on board and the entire fuselage would erupt with cheers and applause.

At Ronald Reagan Washington National Airport, the aircraft with the Hero Flight on board would be greeted by a water cannon salute from the airport’s fire engines.

McFarland said Congressman Adrian Smith was always on hand to greet the veterans on the Hero Flight and would give them a tour of the U.S. Capitol.

During one flight, a daughter who was the escort for her veteran father had to tell him at 2 a.m. that they had to stop and get some sleep. She told McFarland he was telling her stories about his time in the service she had never heard before.

Another time, while visiting the Korean War Memorial, McFarland said he was approached by a Connecticut teacher who was taking her class on a field trip. The class had written thank you paragraphs for veterans and the teacher asked permission for the class to present them to the Dawson County Hero Flight members.

McFarland said there was not a dry eye to be seen when the students approached each veteran with what they had written.

McFarland said they had to pause the flights in 2020 due to COVID-19 and so far they have 12 current applicants for a possible seventh flight in the future.

The Hero Flight committee has stated, “We will continue to fly so long as there are adequate applications and the funding to support it.”

ELWOOD — Due to the ongoing drought and dry weather conditions, there will be no Elwood fireworks show and the Light up the Lake fireworks at …

A Lincoln Southeast soccer coach noticed the same teams were winning each season, so he decided to look at the data. What he found turned into a larger project to tackle inequities in youth sports access.

A flurry of fraud: City clerks have recently stolen money from 17 Nebraska towns

In Nebraska, city and village clerks charged for theft or violating public resources over the past decade, plus another who took money but wasn’t charged, stole an estimated $1.7 million from 17 small towns.

LEXINGTON — If you glanced up toward the sky or observed a sunset recently and thought the sky looked rather hazy, you would be correct. The c…

The state found he used $14,000 in city funds to buy personal items such as fishing equipment.

“They were humble, faith-filled and leaders to their peers. They will be deeply missed by their classmates, teachers and entire school community.”

Lexington firefighters respond to grass fire near Darr I-80 interchange

As a packed room of neighbors looked on, the Valley Planning Commission on Tuesday voted down a proposed luxury RV park along the Platte River.

'The victory has been realized': Longtime anti-abortion activists in Lincoln celebrate end of Roe

"I didn't think it would take this long," said the 88-year-old Shirley Lang. "There have been people praying all over America to undo this because it is wrong."

The Colonial Dames of the 17th Century honored the Dawson County Hero Flight and those who organized the six flights. Sherilyn Ward, fifth from right, presented U.S. Capitol flags to Steve Zerr, second from right and Max McFarland, sixth from left. 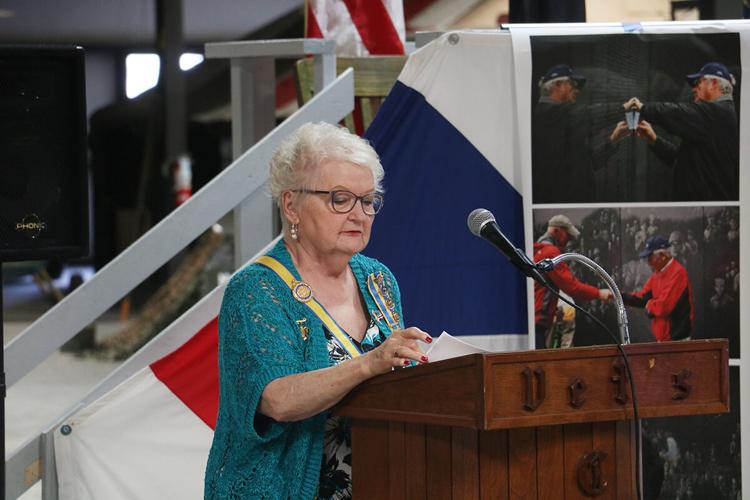 Max McFarland, right, is presented with a flag that flew over the U.S. Capitol during one of the Hero Flight visits to Washington D.C. in 2018.

Dawson County Veterans Service Coordinator Steve Zerr, right is presented with another flag that flew in 2018 during a Hero Flight visit. 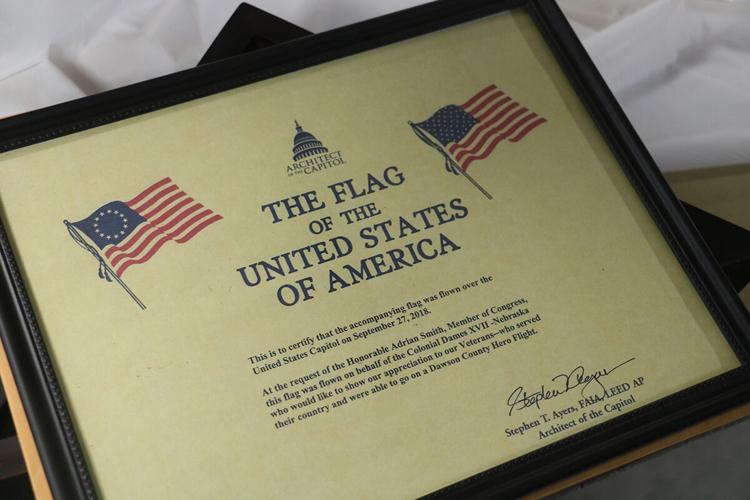 One of the certificates for the flags presented to McFarland and Zerr on Sunday. 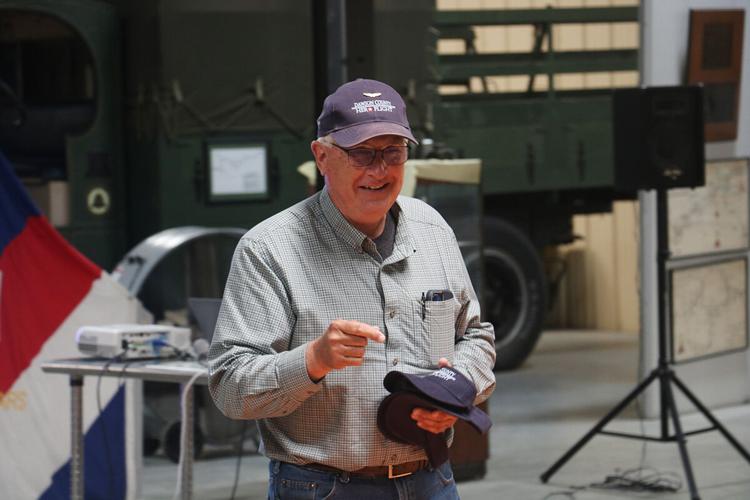 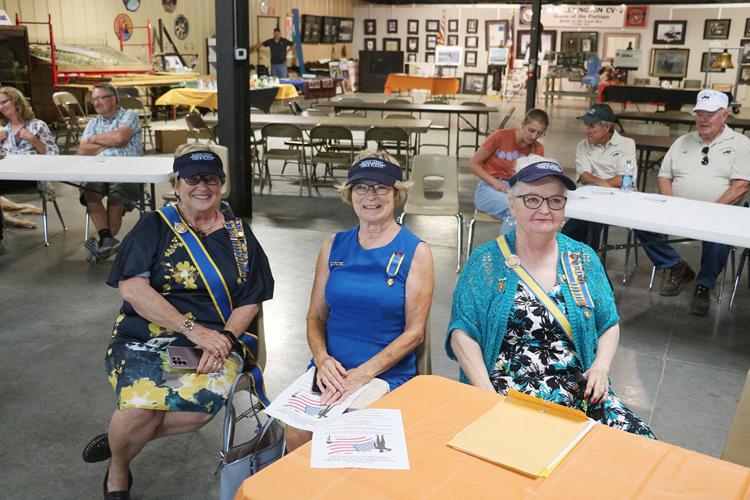 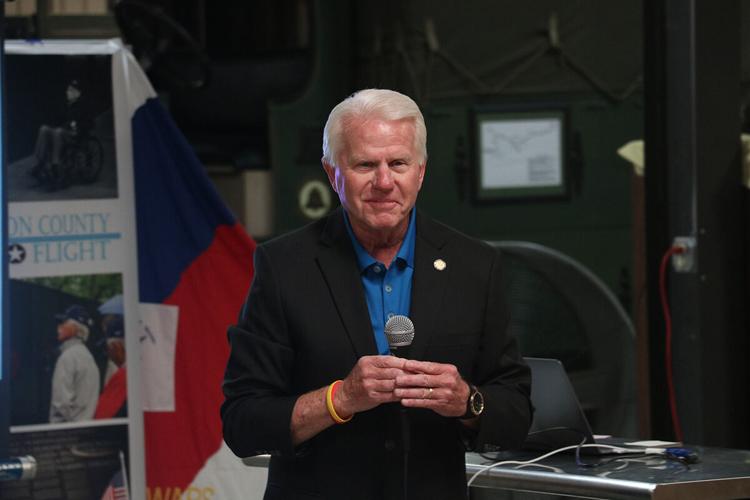