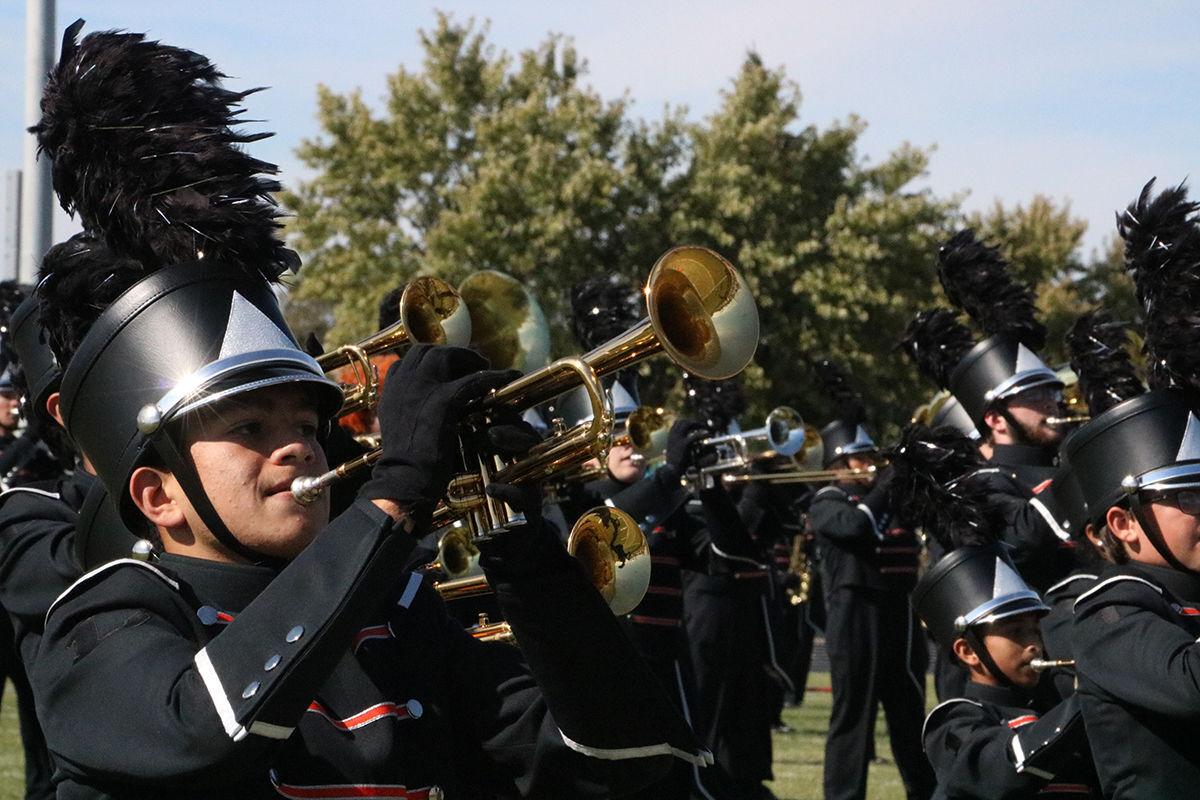 A file photo of the Lexington Pride of the Minutemen Marching Band from 2019. The marching band took second place during the Elkhorn Sounds of Excellence Marching Invitational on Saturday, Oct. 8. 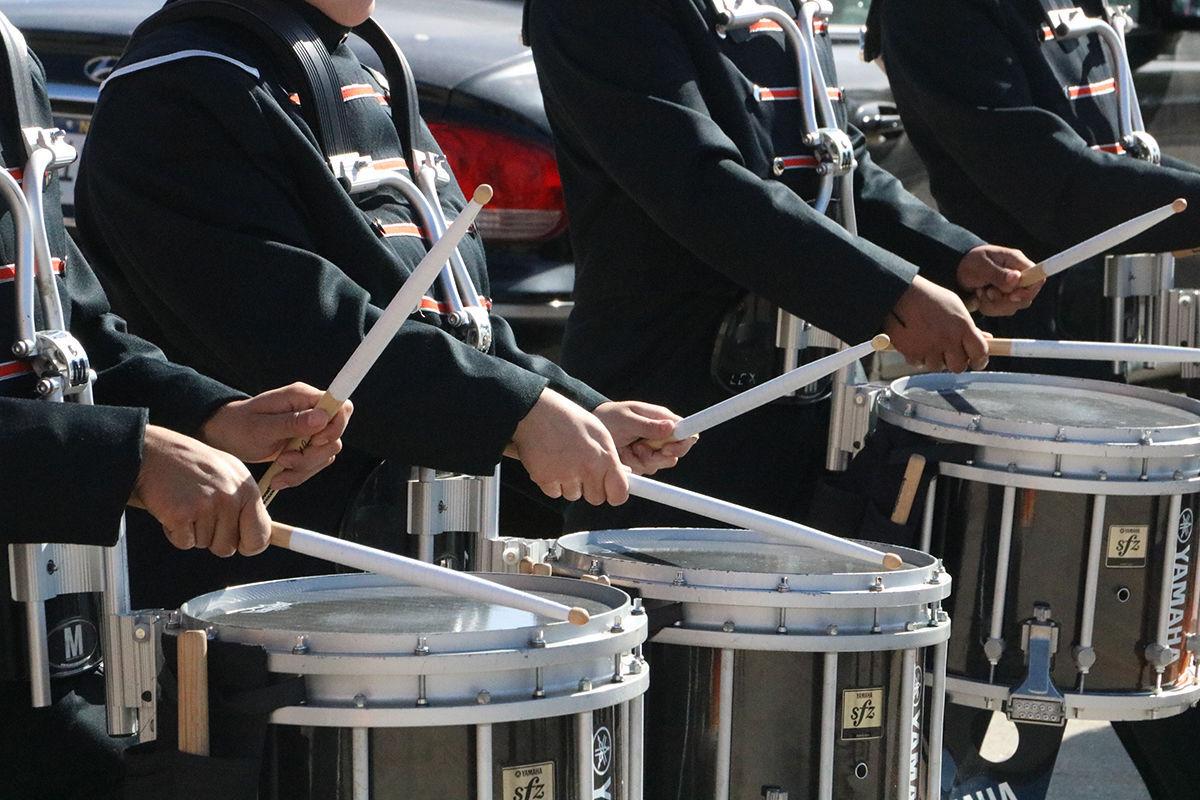 The next competition will be the Lincoln Public Schools Marching Band Invitational on Saturday, Oct. 16.

ELKHORN — The Pride of the Minuteman Marching Band took on tough competitors at their first marching competition event of the year on Saturday, Oct. 9 and took second place overall and first in Class A.

The Elkhorn Sounds of Excellence Marching Invitational may be in its fifth year but it was the Pride of the Minuteman Marching Band’s first time attending the event.

“The Elkhorn Sounds of Excellence is a joint effort of the high Schools in the Elkhorn Public Schools district. It is meant as a celebration of high achievement in marching band and an opportunity for bands to receive valuable insights in the week before the Nebraska State Marching event,” according to the Midwest Marching website.

The competition at the event was stout, Lexington was one of three Class A bands, there was one Class B band but all of the others were Class AA bands, including several from Lincoln and Omaha.

Lexington High School band director Alex Woodside said the competition Lexington was up against on Saturday, “really great,” He said they were up against several talented ensembles.

Another distinguishing factor for Lexington, they march all of their students from every grade level. For instance, the winners of the competition, Gretna, do not march their freshman with the main band; they performed separately at the start of the event.

LHS band director Chad Scharff noted the freshman and the sophomores of the band had never performed in competition before Saturday. The COVID-19 pandemic shutdown all competitions in 2020, with the Lexington band only able to perform for the community.

Lexington started off with a preliminary performance in the afternoon, with the chance to perform in the finals later in the evening if they did well enough.

Woodside said the preliminary performance from the band was strong, but he could tell some of the students were nervous during their first competition.

Scharff said the band did a “nice job, during the preliminary performance but did note the band pushed hard while they were on the field the first time with some overplaying. He said it left some students wore out and unable to play all the way through some phrases.

He said the band was ready to let it fly on the first performance, perhaps with a reliance on, “loud is good.”

Spencer Hansen, LHS band director, said the first performance went well for the band but there were areas that could use improvement.

The band received many positive comments from the judges when the directors spoke to them after the first performance. Hansen said they received very specific notes from the judges about changes that could be made.

Scharff praised color guard director, Melissa Welch,who revamped the ending of the color guards movement in just 30 minutes to help showcase the guard members more. He noted they had been working on their performance since August and changing on the fly is not an easy task.

The band held one rehearsal between performances where they were able to make adjustments based off of the judges’ comments.

Lexington was able to make it to the final round of performances during the evening. Woodside said the second performance on the field felt much more under control, noting the band made, “effective changes.”

Woodside said at the end of the preliminary performance, Lexington was in fourth place but after the finals, they had moved up to second place overall and first in Class A.

Woodside said while second place may seem unsatisfying to some of the students, he noted the first place finisher, Gretna has won all of the recent competitions they have entered. “To compete with these schools is an achievement in itself,” he said.

Taking into account the competition and Lexington’s first time performance at this even he said it “feels like a victory.”

The band will now take this week to prepare for the Lincoln Public Schools Marching Band Invitational, hosted at Seacrest Field on Saturday, Oct. 16. The band will perform at 2:30 p.m., with awards being announced at 6:30 p.m.

Hansen said this week the band will work on ensuring all individuals know their step style and are able to get to their individual spots. He also said they will work on adding more visual movement to help add to the show.

Scharff said the band members will also work on playing with more control and they will get back into the basics of marking fundamentals to help the students footwork and movement.

“We want to clean things up and get everyone comfortable,” Scharff said.

Woodside said one of the most repeated comments of the music judges was for the band to play with more dynamics, the variation of loudness between notes or phrases. He said they will work with the band to play more softly when called for in the music.

The last competition the band will perform in this year will be in the Nebraska State Bandmasters Association State Marching Contest at the west festival site at Kearney High School on Saturday, Oct. 23.

The band’s show this year is the four moment, “Dante.”

In August, Hansen described, “Dante,” as notably thematic and darker than past shows they have performed.

The show is broken down into four movements, part one is the “Prologue,” Hansen said this is the intro and gets off to a dramatic start, featuring a flute solo. Part two is titled, “Inferno,” Hansen described the music in this section as, “driving.”

Part three is, “Purgatorio,” which almost sounds like a funeral march Hansen said. It is described as, “contemplative,” by the show’s publisher. Hansen added this movement will be the most difficult.

The last movement is titled, “Escape/Paradiso,” Hansen said this is a much more positive sounding part and features a surprise for those who listen closely to the music.

LEXINGTON — As the calendar turns over to December, Lexington has a host of Christmas related events set throughout the month.

JOHNSON LAKE — Nebraska state parks will be offering a variety of events throughout the month of December. Find an event near you to celebrate…

LEXINGTON — As the discussion about the need for quality child care in Lexington was ongoing between community members, the need for an afford…

When they tested positive, their expected 12-day trip turned into an expensive, extended ordeal as they tried to navigate the various requirements to get back on an airplane and return to the U.S.

LEXINGTON — The Planning Commission forwarded their approval of a subdivision plan, that will allow Fat Dogs to add high volume diesel pumps, …

Judge Matthew T. Schelp of the Eastern District of Missouri granted the injunction against the Centers for Medicare and Medicaid Services.

The 24-year-old called Lincoln police at around 5 a.m. Wednesday and said his money, jewelry and shoes were stolen.

On Wednesday, Sheriff Terry Wagner told the Journal Star his office had reviewed video available from the scene and had interviewed both the involved trooper and a Lincoln Police officer who witnessed the incident.

"Our clients were told, 'Don't worry about it, she'll be OK.' She suffered profound seizures and will never be the same," attorney Joe Cullan said.

A file photo of the Lexington Pride of the Minutemen Marching Band from 2019. The marching band took second place during the Elkhorn Sounds of Excellence Marching Invitational on Saturday, Oct. 8.

The next competition will be the Lincoln Public Schools Marching Band Invitational on Saturday, Oct. 16.