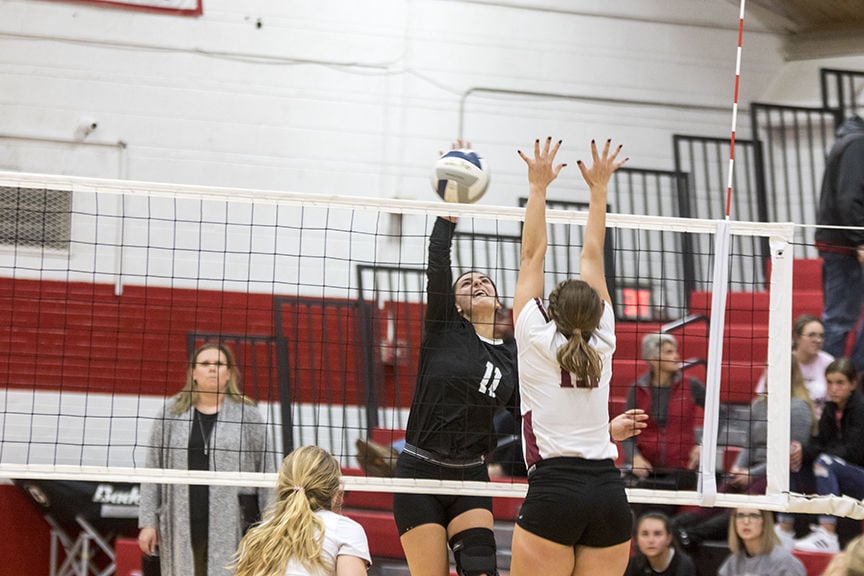 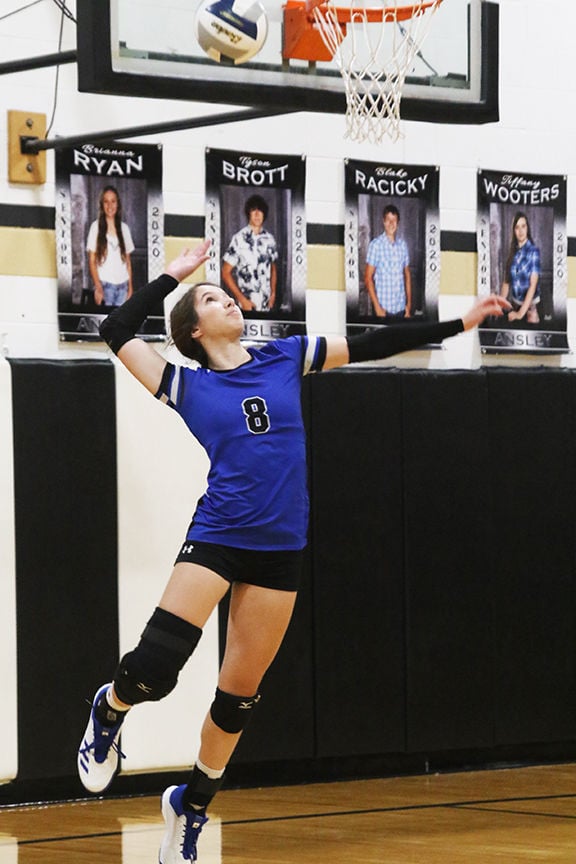 Overton’s Anna Brennan Serves an ace in Thursday’s match with Loomis at the Ansley/Litchfield triangular. 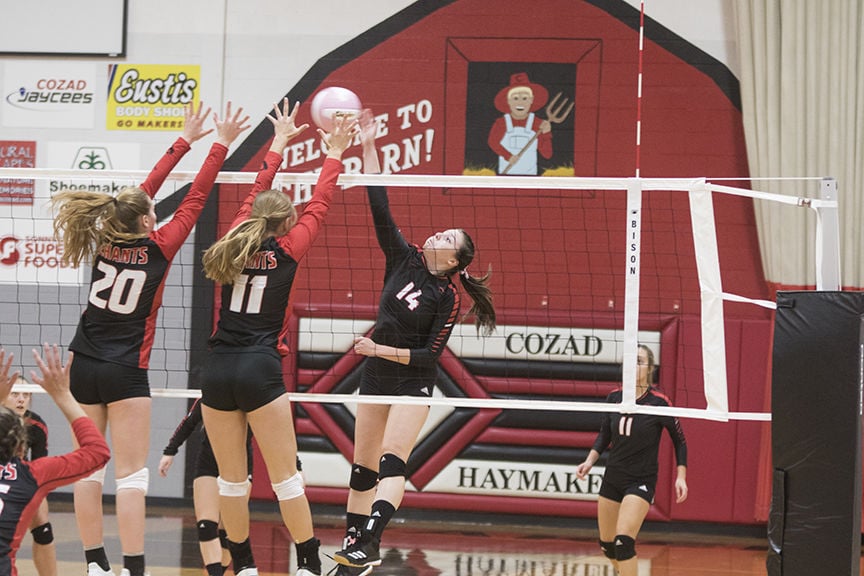 Overton’s Anna Brennan Serves an ace in Thursday’s match with Loomis at the Ansley/Litchfield triangular.

LEXINGTON – Several area volleyball teams claimed some wins this week. The Minutemaids started the week with a rough triangular appearance at Adams Central on Tuesday, Oct. 8. Lexington fell to the Patriots, 1-2, and dropped their game with the York Dukes, 0-2. The ‘Maids recovered from the losses on Thursday, Oct. 10 when they traveled to McCook and took a 2-0 win over the Gothenburg Swedes before a 2-0 win over the Bison. The lady Haymakers hosted a triangular with Ord and Broken Bow on Tuesday. The Cozad squad first fell to Ord, 0-2, and dropped their game with the Broken Bow Indians, 0-2. The Hi-Line Bulls traveled to Arapahoe on Thursday. The Hi-Line squad tipped the scale to a win-heavy 12-11 season with a 3-0 victory over the Warriors. The Overton Eagles added three more wins to their season this week. On Tuesday, the Eagles put up a 3-0 win over the Gibbon Buffaloes in Overton before traveling to Ansley on Thursday for a triangular. The Overton squad took a 2-0 win over the Loomis Wolves and a 2-0 victory over the Ansley/Litchfield Spartans.

The Minutemaids had not experienced a match with the Gothenburg Swedes before meeting with them in McCook on Thursday. The ‘Maids entered the game with a 9-16 season vs. the Swedes’ 12-14.

Fans were treated to an exciting game as Lexington took the court with Gothenburg. Gothenburg took an advantage in the first half of the first set with the Minutemaids. The Lexington squad battled back to a tie game, 9-9, and continued to snatch the lead from the Swedes. The Minutemaids drove up a six point lead, 15-9, before Gothenburg could interrupt the rally. The teams traded blows with Lexington holding the advantage, driving the score to a 23-16 lead. The Swedes pushed back with Lexington standing at the door of a win, and scored six more points before Lexington snatched their last two for the win, 25-22.

The second set saw the Minutemaids trade points with Gothenburg. The Swedes held the leading edge of the back and forth before the Minutemaids caught up for a tie game, 16-16, and taking the lead 17-16. Lexington held the front side of a tie game until the Swedes regained the lead, 21-22, and then went on to lead 22-24. The match between the Gothenburg Swedes and the Lexington Minutemaids looked to go into a third set when the ‘Maids came back to tie, 24-24, take the lead, 25-24, and then the win, 26-24.

Stat leaders for the Minutemaids in the match with Gothenburg included Cordelia Harbison with 15 kills and 10 digs, Brisa Garcia with four aces and 17 digs and Liah Haines with 35 assists.

“We played really aggressive against Gothenburg and I was really proud of that,” Lexington head coach Samantha Hammond wrote in an e-mail to the Clipper-Herald after the triangular. “They never gave up on each other.”

After sending the Swedes away, the McCook Bison took the floor to take their turn with the Minutemaids. The Minutemaids went on to take a 2-0 win with a 25-18 first set and a close 25-23 second set victory.

Stat leaders for the match between the ‘Maids and the Bison included Harbison with 11 kills, 14 digs and two aces, Haines with 27 assists and Sarah Treffer with eight digs and three aces.

“We were definitely emotionally and physically tired for the McCook game and had to battle every point,” Hammond wrote of the match with the Bison. “Our serving really helped us in the game.”

The Cozad Haymakers Volleyball squad will test their might in Minden when they take on the Whippets on Tuesday, Oct. 15 at 7 p.m. The Hi-Line Bulls and the Overton Eagles begin their conference tournament in Overton on Monday, Oct. 14 while the S-E-M Mustangs will play their part of the Fort Kearny Conference in Pleasanton.