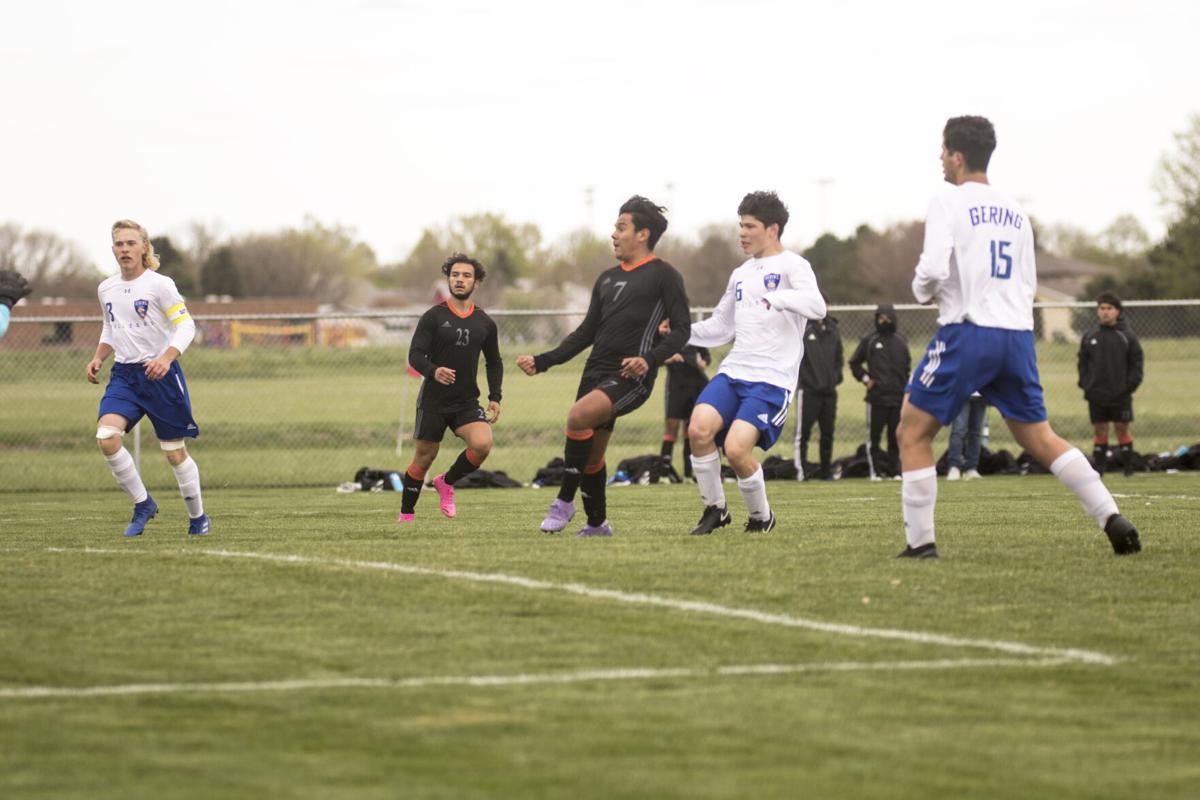 Lexington senior Josh Morales’ face lights up as he watches the ball slip past the Gering goalkeeper for Morales’ first, Lexington’s seventh goal of the game on Monday, May 3.  The Minutemen took a 10-0 shutout win to open their post-season career at the Optimist Sports Complex in Lexington. 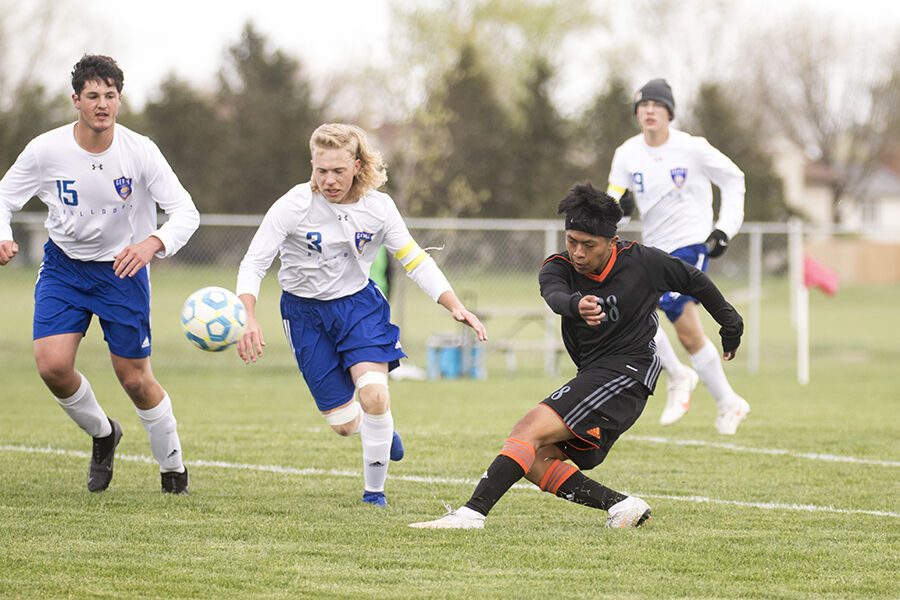 Lexington sophomore Zeke Lucas sends a ball down-field in the first half of Lexington’s home postseason opener with the Gering Bulldogs.

LEXINGTON – The Lexington soccer teams have blown past their first tests in the post season with the Minutemen taking a big, 10-0, shutout win at home over the Gering Bulldogs on Monday, May 3 while the Minutemaids faced their Gering opponents in Scottsbluff, taking a shutout win of their own, 6-0.

The Minutemen began scoring goals just four minutes into the game on Monday with a goal by Miguel Raymundo assisted by Fredy Vargas and followed with a second goal just two minutes later, in the sixth minute, scored by Diego Martinez while Alex Perez claimed the assist.

They were just the beginning.

Raymundo and Martinez scored an additional three goals in the first half alone, with two more goals from Alex Perez and Josh Morales to take a 7-0 lead. The Minutemen were still mercilessly powering into the wind for the Gering net when the Bulldogs were saved by the halftime buzzer.

The halftime break gave the Minutemen the wind at their backs for the second half where they poured three more goals into the net in the first five Minutes of play. Martinez scored his fourth goal of the game at the 42 minute mark, followed by another from Alex Perez at 44 minutes. Jason Tovar sealed the deal with a goal assisted by Perez at the 45 minute mark.

Lexington was the aggressor in the game, as the Minutemen’s goalkeeper, Eduardo Gomez, recorded just one save in the game, with no goals-against. Goal totals for the Minutemen included Jason Tovar and Josh Morales, each with one goal, Miguel Raymundo and Alex Perez with two, and Diego Martinez led with four goals in the subdistrict opener. Assists went to Harold Pineda, Ernesto Vargas, Fredy Vargas and Luis Mejia. Alex Perez was also credited with two assists.

The Minutemaids drove up four goals in the first half against Gering at the B-8 subdistrict girls’ site. They followed with two more unanswered goals in the second half for a 6-0 lead that would last them until the end of the game for the team’s seventh shutout win of the season.

Goals in the ‘Maids win over Gering in the subdistrict opener were scored by Klair Fagot and Citlali Prado, each with two, while Ariana Cabrera and Berniece Garcia each added one goal. Assists went to Cabrera and Valeria Perez.

Alyssa Winter recorded eight saves in the game with Gering for yet another notch on her shutout belt. Lexington outshot Gering, 35-9.

As pointed out in an email from Minutemaids head coach Keith Allen, the Lexington girls continue to break records in the post season. Those records include:

Most assists in a season – Valeria Perez (8)

Most assists in a career – Valeria Perez (8)

Most shutouts in a season – Alyssa Winter (7)

Most shutouts in a career – Alyssa Winter (13)

The second night of subdistrict soccer was set for Tuesday, May 4 where the top seeded Minutemen were at home against the second seeded Scottsbluff Bearcats and the second seeded Minutemaids faced the top seeded Scottsbluff lady Bearcats at home. Results for Tuesday’s games weren’t available at press time. District pairings will be completed after subdistrict finals are complete.

LEXINGTON - The Minutemaids marked their tenth win of the season with another win over the Grand Island Northwest Vikings on Monday, April 26.…

Lexington senior Josh Morales’ face lights up as he watches the ball slip past the Gering goalkeeper for Morales’ first, Lexington’s seventh goal of the game on Monday, May 3.  The Minutemen took a 10-0 shutout win to open their post-season career at the Optimist Sports Complex in Lexington.

Lexington sophomore Zeke Lucas sends a ball down-field in the first half of Lexington’s home postseason opener with the Gering Bulldogs.