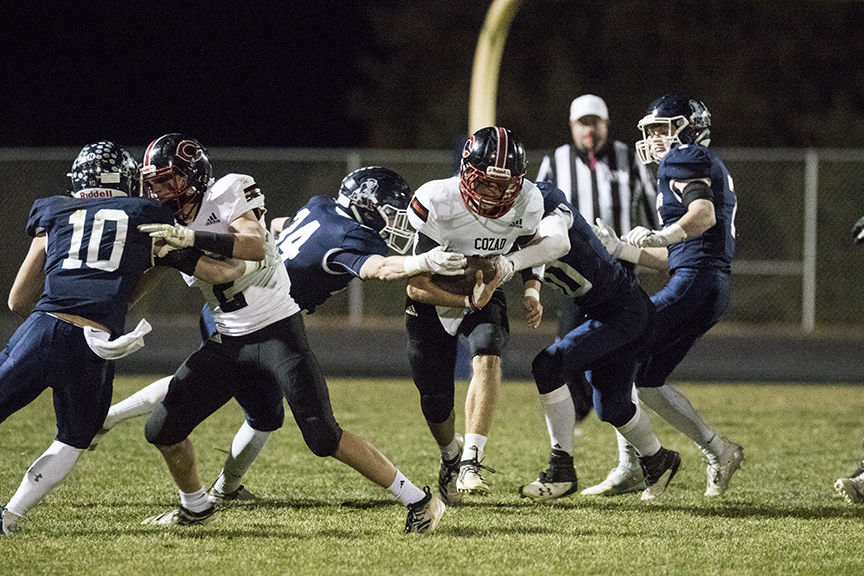 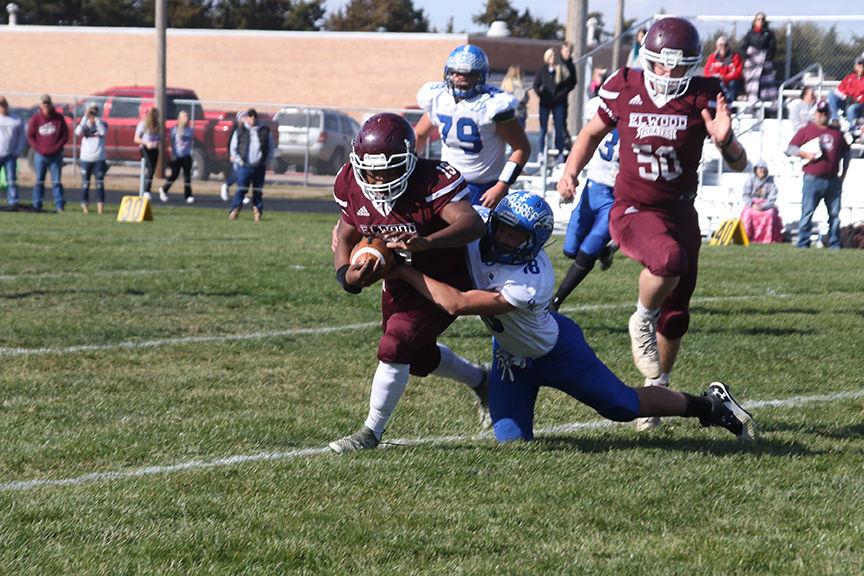 Elwood Pirates’ Hank “the Tank” Green carries the ball with Overton Eagles’ Wyatt Ryan hanging from his waist in the Thursday, Oct. 24 game in Elwood.  Elwood claimed the win and the district championship in the end, 42-38.

Elwood Pirates’ Hank “the Tank” Green carries the ball with Overton Eagles’ Wyatt Ryan hanging from his waist in the Thursday, Oct. 24 game in Elwood.  Elwood claimed the win and the district championship in the end, 42-38.

LEXINGTON – Lexington area football saw two more games played on Friday, Oct. 25 to signal the end of regular season football. The Lexington Minutemen traveled to Alliance to take their turn with the Bulldogs and took a 28-21 win. The Cozad Haymakers traveled to Adams Central to finish their season with the Patriots and took home a loss, 0-44.

The Minutemen took the field with the Bulldogs and Alliance broke onto the scoreboard first with an unanswered touchdown in the first quarter. Unanswered, at least, until the second quarter when Lexington dug in and put together two touchdowns in the second quarter while halting any scoring attempts by Alliance to take a 14-7 lead as the teams went into half-time.

The second half saw a more consistent performance from the Minutemen, scoring one touchdown in the third, and one final touchdown in the fourth quarter. Alliance went scoreless in the third but was able to pull 14 points in the fourth quarter. Lexington held their lead on the Bulldogs for a 28-21 win to end the season for the Minutemen, 4-5; the Alliance Bulldogs season dropped to 3-6.

Lexington senior quarterback Kaleb Carpenter led the Minutemen to the win with 11 completions on 20 attempts for a total of 176 yards with one touchdown. Receiving for Carpenter was senior Dylan Richman for 87 yards on three receptions for one touchdown while senior Dau Mach gained 51 yards on four receptions.

The Cozad Haymakers met their toughest match this season in facing the Adams Central Patriots on Friday, facing their first shutout loss since their season opener with Ord where they fell to the Chanticleers, 0-28. Adams Central took a bigger advantage over the Haymakers, 0-44.

The Patriots got right to work putting up 17 points in the first quarter and three touchdowns for 21 points in the second quarter. Cozad trailed 0-38 as they went to half-time.

After the half, the Patriots scored just one touchdown for the remainder of the game. Their defense, however, was as effective as the first half and held Cozad scoreless through the end of regulation time. The Haymakers fell to the Patriots, 0-44. Cozad’s season dropped to 5-4 after the loss while Adams Central remains undefeated, 9-0.

Wetovick also led in rushing with 43 yards on 11 carries and was followed by sophomore Jacob Weatherly who gained 39 yards on four carries.

With regular season football in the past, the teams look to playoffs for the future. Lexington and the four surrounding schools qualified for the 2019 playoff season.

Lexington, the Class B no 13 seed, with face the fourth seeded Grand Island Northwest on Friday, Nov. 1 at 7 p.m. while the Class C1 no. 14 seed Cozad will travel to Ashland to take on the third seeded Ashland-Greenwood Bluejays, also at 7 p.m. The Elwood Pirates enter the D2 playoff bracket as the fourth seed and will host the no. 13 seed Maxwell Wildcats on Thursday, Oct. 31 at 6 p.m. and the Overton Eagles will enter the same bracket as the eighth seed, hosting the no. nine seed Chamber/Wheeler Central/Ewing (CWCE) Renegades on Thursday at 5 p.m. The S-E-M Mustangs will also be on the road on Friday, Nov. 1 as the no. 16 seed in the Class D6 bracket. They will head to Cody to take on the top seeded Cody-Kilgore Cowboys at 1 p.m.