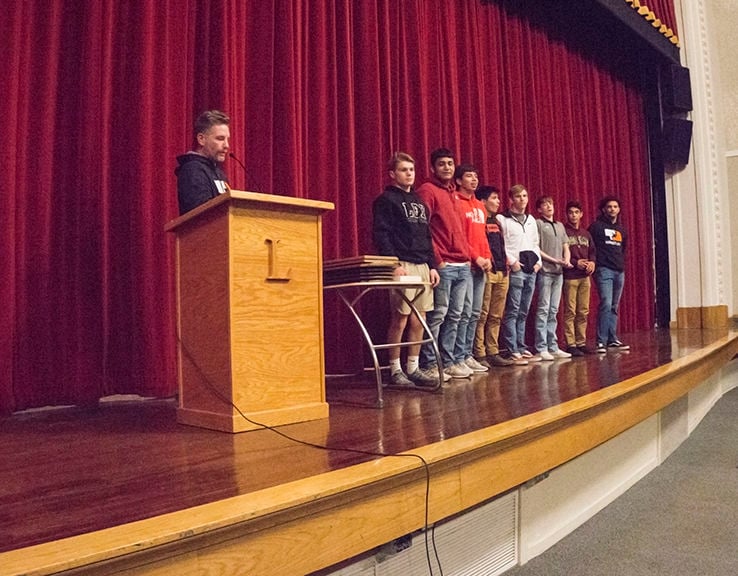 Lexington head wrestling coach Karl Degenhardt recognizes the eight state qualifiers for their hard work through the end of the season at their team banquet on Thursday. 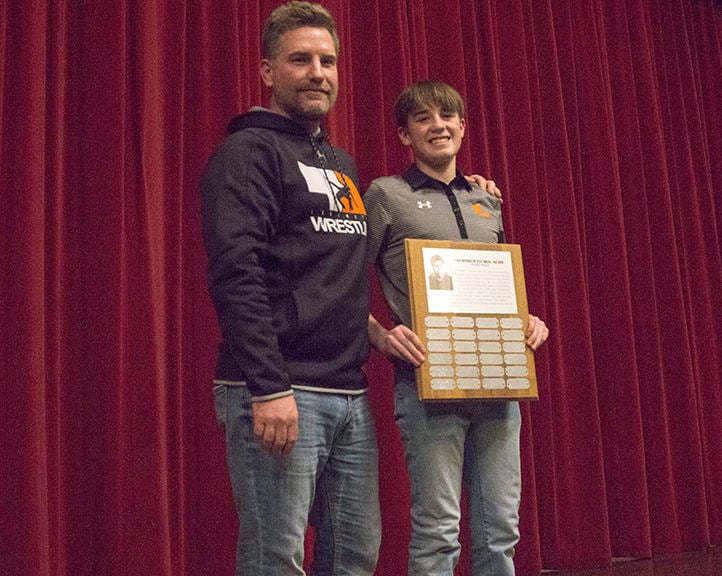 Lexington head wrestling coach Karl Degenhardt recognizes the eight state qualifiers for their hard work through the end of the season at their team banquet on Thursday.

The collective wrestling family brought food and desserts to be enjoyed by all, especially by the wrestlers who had been working hard to maintain weight through the season. After all had made their way through the line and had their fill, the show was moved to the auditorium where Coach Degenhardt could properly tip his hat to the wrestlers he and the other coaches chose for the awards.

Degenhardt opened by thanking everyone for being there. Not just at the banquet, but for their support throughout the season. He acknowledged that the Minutemen made some long distance trips that made it difficult to follow, but applauded the fans for making Lexington’s presence strong at the tournaments. While it may make travel difficult, Coach Degenhardt feels that it’s the price the LHS wrestling program pays to seek out stronger competition, ultimately making them better.

Coach Degenhardt invited the state qualifiers onto the stage to recognize their hard work, pointing out that five of those qualifiers will return to the program next season.

Next, the individual honors were announced.

The Herbie Solache Award is given to the wrestler with the most pins at the conclusion of the season. It is named after a Lexington High School wrestler. This year the award went to freshman Daven Naylor with 22 pins this season..

The David Appelt Award is a junior varsity only award that goes to the wrestler who most reflects the best qualities of its namesake who excelled in sports as well as academics. This year’s David Appelt was awarded to Jacksen Konrad.

The Guts Award is given to the wrestlers in the program who are faithful to the program and boast 100 percent attendance of practices. Coach Degenhardt expressed how difficult this award can be to obtain, particularly because of illness. Those earning the Minutemen Guts Award included Ean Bailey, and Daven Naylor..

The Leadership Award goes to a wrestler with great character who is enthusiastic and emerges as a source of inspiration. They inspire confidence in others and draw the trust and best efforts from their teammates. This year’s Leadership Award winner was Daven Naylor.

The Sportsmanship Award is for a wrestler who respects the rules of the game, teammates, coaches, officials and opponents while being a reflection of the team, school and community. It goes to a wrestler who knows how to win with class and lose with dignity and supports his teammates, and enjoys being a part of the team. This year’s Sportsmanship award winner was Sebastian Romero.