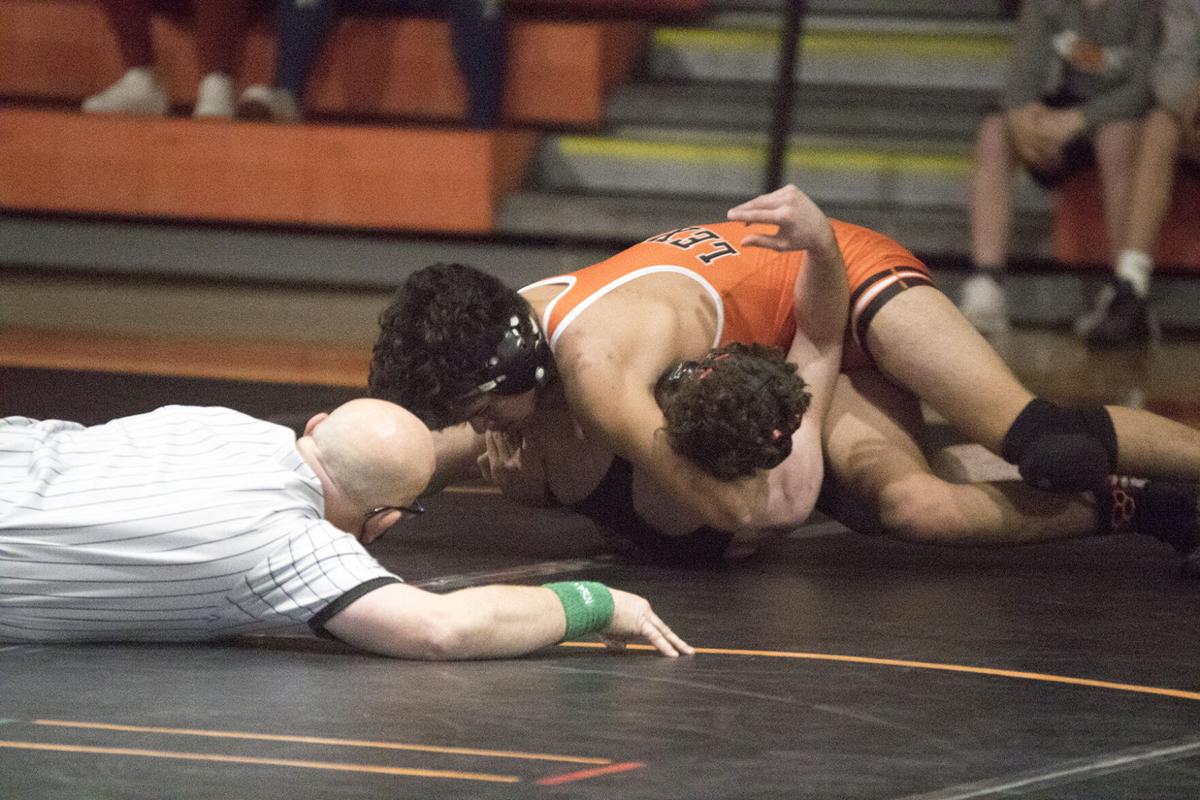 Ivan Lazo celebrated his 100th win at the dual with Amherst on Tuesday, Jan. 5.  Lazo’s 100th was the result of a pin in one minute and 52 seconds over Amherst’s Caleb Bivainis.

LEXINGTON – Lexington wrestlers were at home, hosting a dual on Tuesday, Jan. 5 when they welcomed the Amherst Broncos to the mat on Coach Carpenter Court. The Lexington Wrestlers took the win in the dual with 43 points over 27 for the Broncos.

Starting in the 126 lb. match, Dylan Hubbard took a win by fall over Ian Hughes, pinning hughes in 3:24 to give Lexington six points.

Gregg Treffer, Lexington’s 145 lb. entry in the dual went toe to to with Ben Mcgee. Treffer took the win by 8-1 decision for three more points in Lexington’s pool.

Rene Corado added more points to the Lexington effort with a win over Amherst’s Jakob Graham. Corado took the win on points with a 10-4 decision win for three points.

With the Minutemen leading, 16-3, the Broncos set Josh Klingelhoefer against Jackson Oaks. Klingelhoefer pinned Oaks in 50 seconds for six points.

Amherst gained a little ground on the Minutemen with Brody Bogard’s win over Ismael Ayala in the 182 lb. match. Bogard pinned Ayala in 3:59 for six points.

Riley Gallaway earned the lead for the Broncos with his win in the 195 lb. match with a win over Fredy Vargas. Gallaway took the win by fall, pinning Vargas in 1:29 for six points and the Broncos took the lead in the dual, 19-21.

Sebastian Dones claimed six points for Lexington in the 220 lb. match as Amherst did not have an entry.

Jaxon Taubenheim of Amherst took six points in the 285 lb. match as Lexington did not have an entry.

Lazaro Adame added six points for Lexington in the 106 lb. match as Amherst did not have an entry.

Ulices Caldera extended Lexington lead with six points on an empty mat in the 113 lb. match as Amherst did not have an entry. Only one match remained and Lexington led the Broncos, 37-27.

The last match may not have been the deciding match for the winner of the dual, but it held other significance for one Lexington and his fans. Ivan Lazo took the mat with Amherst’s Caleb Bivainis. Lazo took the win by fall, pinning Bivainis in 1:52 for another six points and earning his 100th win.

Lexington wrestling will travel to Beatrice for their next round of matches. The Orangemen invite is set to begin matches at 9 a.m. Only one household member or grandparent will be allowed per wrestler at the event to meet capacity limitations.

Links for live streams of Lexington athletics can be found on their website at www.lexschools.org.

BEATRICE - The Lexington Minutemen wrestlers took a trip to Beatrice to represent their school at the 2021 Beatrice Invitational on Saturday, …

Ivan Lazo celebrated his 100th win at the dual with Amherst on Tuesday, Jan. 5.  Lazo’s 100th was the result of a pin in one minute and 52 seconds over Amherst’s Caleb Bivainis.