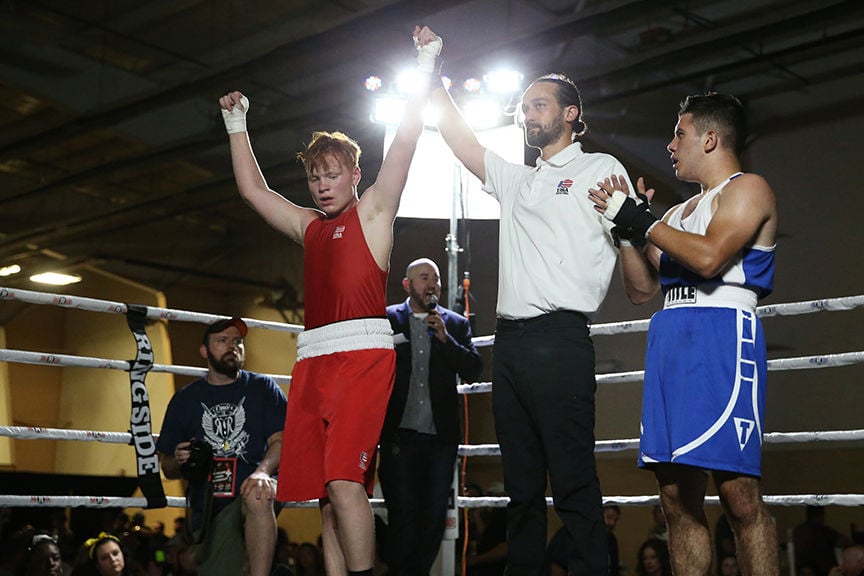 The referee raises Sonni Martin’s arm after he was announced the winner by unanimous decision in Kearney on Saturday, Aug. 24 after defeating Amori Coronado of Grand Island. 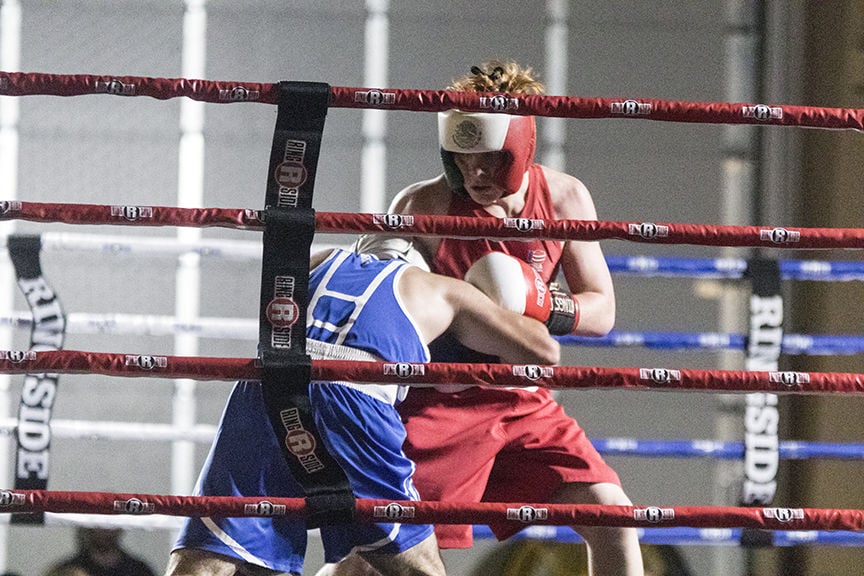 The referee raises Sonni Martin’s arm after he was announced the winner by unanimous decision in Kearney on Saturday, Aug. 24 after defeating Amori Coronado of Grand Island.

KEARNEY – The Heartland Boxing Championship #4 was held at the Buffalo County fairgrounds this weekend, where Lexington’s Sonni Martin was billed to participate in the amateur bouts preceding the pros. Martin won his bout at the end of the three-round limit by unanimous decision.

Martin, the 137 lb. 14-year-old took the ring in the fifth bout of the night opposite Amori Coronado, a 135 lb. 16-year-old fighter from Grand Island. Despite Martin being the younger fighter, he entered the ring with more experience than Coronado as well as having a reach on the Grand Island boxer. The might advantage was clear as the two met in the middle of the ring to touch gloves before the fight began.

With the ring of the bell, Martin took fewer strides to cross the ring to meet Coronado. Martin exploded with a seemingly never ending series of body shots in rapid succession, broken only by an occasional swing upstairs to the head of Coronado. In the opening 30 seconds Martin had already established a lead on the score cards when the fight changed, slightly.

Both fighters changed to a more calculated style of boxing for the remainder of the first round, but the young fighters still took chances against one another to try and sneak past the other’s guard. Coronado succeeded in backing Martin into the ropes a few times and caught him in a corner for an opportunity late in the first round. Martin’s bobbing and evading left most of Coronado’s punches without a target as Martin’s dodging gave Coronado just a glancing blow in the exchange. After the first round, murmurs in the crowd could be heard that Martin clearly had the upper hand and Coronado’s only hope was for Martin to tire before the end of the fight.

The Second round saw two hungry boxers come together in the ring, often breaking from their calculated dance to go toe-to-toe and battle in close quarters. This gave Coronado a few opportunities for some clean shots inside of Martin’s longer reach for some points of his own. Midway through the second round, Martin caught Coronado’s guard drooping and, with a carefully measured left jab, connected with Coronado’s chin. Coronado listed into the ropes and the referee began a standing count before resuming the fight.

The Third round saw a very tactical approach from Martin, using his reach advantage to snipe jabs at Coronado and hold him at arm’s length. With seconds left in the third round, Martin threw a left jab at Coronado, to which Coronado responded with a powerful right-hand punch to the side of Martin’s head. Martin recovered quickly and straightened his headgear before going to work with more long jabs to hold Coronado at a distance. With a few more close range exchanges, the bell rang to signal the end of the fight. In that moment, both fighters took the other into a respectful embrace and the fight was done.

Martin was awarded the win by unanimous decision and the fighters, again, congratulated each other on a good fight.

“It was hard and easy to beat him,” Martin said in an interview, referring to the hard work and his mental preparation in visualizing the win. “It was a good fight.”

When asked about his explosive start in the first round Martin said it was an attempt to establish an upper-hand early in the match.

“I was trying to work up the points, have more hands than him and be faster than him,” Martin explained. He also talked about some of the time he spent on the ropes and how getting out wasn’t as easy as he made it appear. By saying “When he had me in the corner it was hard trying to get out and he had an advantage on me. When I did get out I forced him back to the middle of the ring, toe-to-toe.”

Martin’s ability to evade Coronado’s punches on the ropes and in the corners looked practiced beyond the skill level of a typical fighter his age. He credited fellow Lexington boxers Shilo Weston and Denny Nolasco for their help with training.

Nolasco, Martin’s training and sparring partner, interviewed after the fight on Saturday. Nolasco insisted Martin’s dedication and experience were key to his victory in Kearney.

“We spar and workout together every day,” Nolasco said of his training with Martin. “He pushes me and I push him. He had more experience than his opponent so I told him, ‘what you do with me, you do to him.’ It worked.”

After his interview, Martin wanted to thank his fellow boxers and his family for their support.