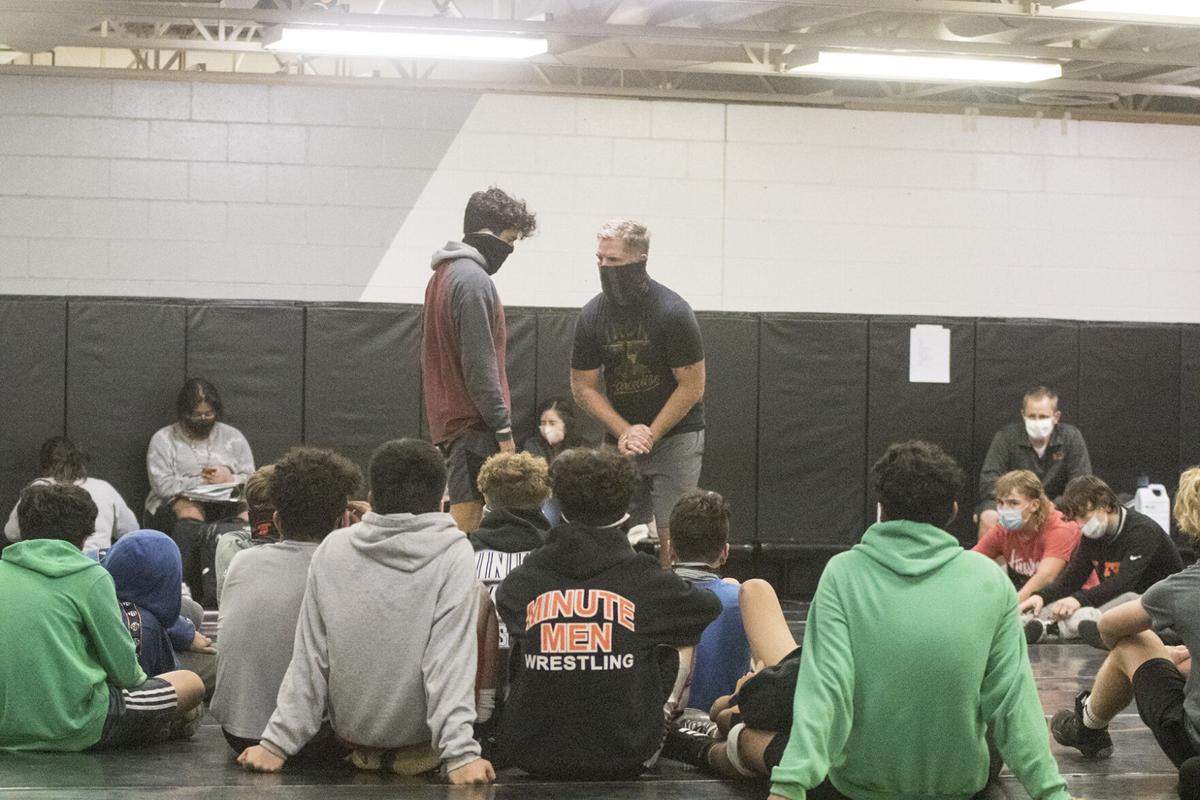 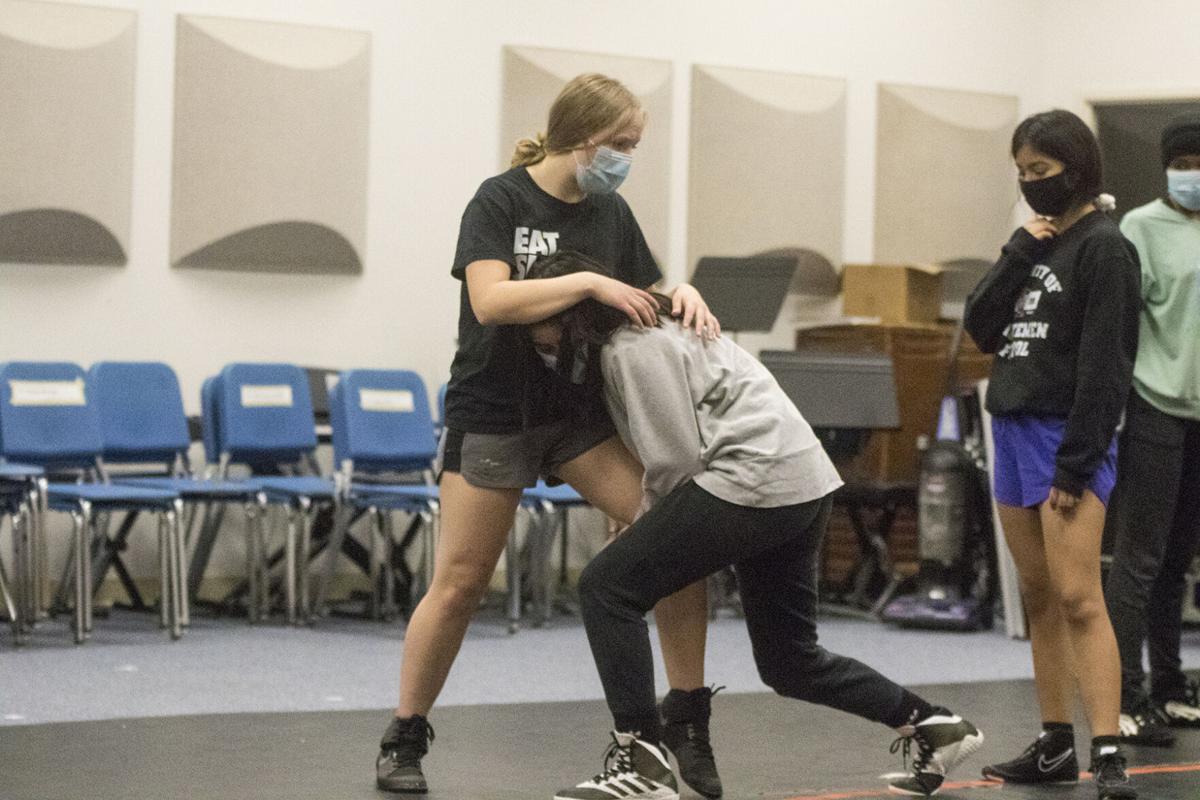 Lexington wrestlers Francisca Walsch (left) and Kitzia Hernandez practice on a mat in the choir room at Lexington High School on Thursday, Nov. 19.  Enrollment in wrestling for girls has more than doubled since the NSAA announced a provisional girls wrestling season. 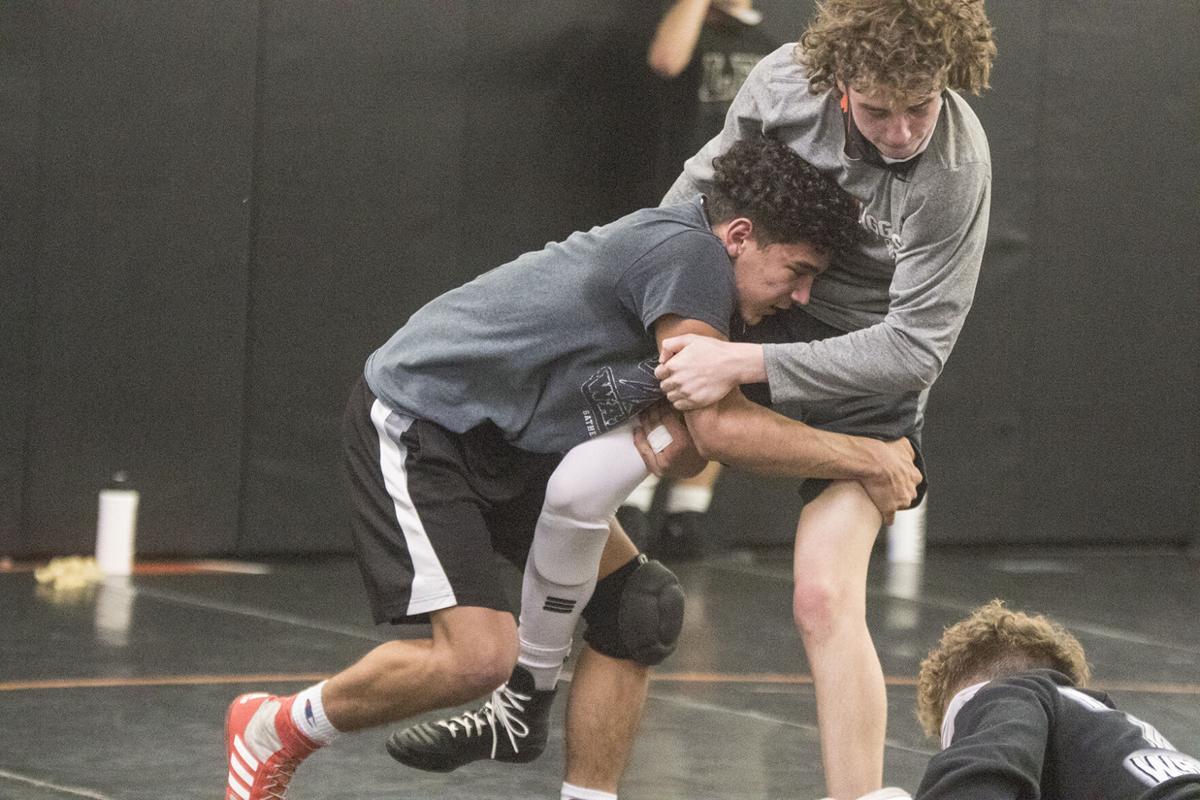 Ivan Lazo (left) and Daven Naylor spar in the wrestling room in Thursday's practice at Lexington High School.  Lazo and Naylor are both returning state qualifiers.

LEXINGTON – One doesn’t need to go to the wrestling room to see the Lexington wrestlers in their first week of practice at LHS. With higher numbers of wrestlers enrolled and splitting into groups to reduce exposure, the LHS Wrestling athletes could be found in the hallways, the wrestling room and even the choir room where they are working hard to prepare for the coming season.

In a strange time, the Minutemen and Minutemaids of the mat are making everything count with their practices and facilities. They’re also practicing as though each one is their last to make themselves more ready for the end game; the state championships.

In their first week of practice, we’re going to look at some of the big things happening in the Lexington High School wrestling program.

Ismael Ayala, a junior and one time state qualifier, wrestled in the 195 weight class at the state championships in February. He went 0-2, falling first to Kole Bordovsky of Wahoo in the first round by fall in 2:45. In his second match, Ayala lost by fall to senior Jacob Diaz of York in 0:44.

When asked about how his experience at the state tournament would direct his goals, his answer was quick and unquestionable.

“It’s always to go to state and win a state medal,” Ayala said simply. “I’m looking to do more riding on top and getting off the bottom this year. That’s what I’m trying to get better at by getting the best practice partners I can get.”

As a freshman, Daven Naylor went 1-2 at the state wrestling tournament in Omaha in February. He took a win in the first round, defeating sophomore Ivan Perez of Schuyler by fall in 3:40 before taking a loss in the second round to sophomore Zachary Ourada of Omaha Skutt by technical fall, 0-15. Naylor lost his first match in the consolation side of the bracket to freshman Blaine Christo of Ashland-Greenwood by fall, 1:58.

When asked if he felt qualifying put pressure on him this season, Naylor handled the question with honesty and confidence.

“Yeah, coming back for sophomore campaign and looking for something bigger than last year,” Naylor responded. “Qualifying was great last year but, ultimately, I have bigger goals than that. It’s to go down to Omaha, wrestle on Saturday and get a medal.”

Naylor also shared the wisdom he gained at the CHI Center in Omaha when asked about his losses on day two of the championships.

“I didn’t wrestle very well that second day at state, last year,” Naylor said. “I figure I could have beaten that last kid, but that’s in the past. I’m wrestling (Ivan) Lazo every day in the practice room and he’s making me even better.”

Ayala and Naylor weren’t the only LHS wrestlers to come away from the state championships with more knowledge than when they went. Dylan Hubbard, a senior and one time state qualifier, took two losses in Omaha in February. He fell in the first round to junior Dominic Cherek of Plattsmouth by 7-11 decision and fell to junior Trae Greve of Waverly in his consolation match by 5-10 decision. Hubbard concluded that his losses in Omaha were due to mental mistakes.

“Last year taught me a lot,” Hubbard began. “It taught me not to overthink things and not to underestimate my opponents. They may not look like they’re very good, but there’s always a chance of losing.”

Hubbard also said he plans to wrestle in the 132 lb. weight class for the first half of the season and dropping back to the 126 lb. class for the second half, hoping that it will make him stronger ahead of the district tournament.

Lazo went 2-2 in the 2019 State Wrestling Championships and took home a fourth place state tournament medal in February. He won the first two rounds, defeating sophomore Brock Bolling of Pierce by 6-1 decision and an incredible upset win over the B1 district first place medalist freshman AJ Parrish of Bennington by 4-1 decision. He fell in the third round to freshman Braiden Kort of Adams Central by 5-7 decision. Kort went on to take state runner-up in the 113 lb. bracket.

Lazo then faced two rematches in the consolation bracket, taking a second win to Bolling by 6-1 decision and met Parrish in the third place match. Parrish took the win by fall in 2:43, and Lazo took home a fourth place medal.

Lazo has analyzed his state appearances and intends to correct the mistakes for a bigger season.

“In past years I’ve been giving up weak points,” Lazo said of his experiences at the state championships. “This year I’m just trying to give up fewer points, open up less and work on my defense. I’m just trying to secure a state title.”

Lazo will be moving up into the 120 lb. class for the 2020-2021 season. Many wrestlers like to wrestle heavier athletes to make themselves stronger for the post season. Lazo, however, has primarily been working with his 113 lb. replacement, Naylor. Lazo feels wrestling down with Naylor gives him opportunity to fine-tune his technique.

“I’ll wrestle anybody. I’ll wrestle lighter kids and I’ll wrestle heavier kids,” Lazo began of his practice partner. “Wrestling Daven makes me break everything down. It’s a refresher and helps me slow down and do everything right.”

The level of focus on the LHS practice mats is unmistakable. If it were available for public viewing, anyone could see an increase in the wrestlers’ drive from previous years. Lexington head coach Karl Degenhardt noticed the change, and is happy with the result.

“It’s a good group,” Degenhardt said proudly after Thursday’s practice. “I think, this year, we’re going to find some true leaders. You can already tell we’ve got that going on. So far, we’ve been focused and we’ve had a good week.”

Coach Degenhardt speculated on the reason for the motivation in his wrestlers this season and it is something we all hear about every day.

“I think part of it is that they’re really excited to be here, this year,” Degenhardt continued. “In the back of my mind, I don’t know when or if this gets shut down and I think they’re ready to work hard every day. They practice like maybe it’s their last practice of the season. Seeing their hard work, I think we’re going to have a good, fun and successful year.”

Degenhardt has expressed in years past that his goal for state qualifiers is typically a solid seven qualifiers.

“I feel like we show a lot of improvement from the beginning of the season to the end,” Degenhardt said. “If you’d have told me at the beginning of last season that we’d qualify eight guys, I don’t know that I would have thought so.”

Degenhardt recalls correctly. In his preseason interview last year, his estimation for wrestlers he would be taking to state was six. The Minutemen exceeded his expectations.

“Between our schedule, our practices and our coaching staff making sure they improve in areas they’re weak, that’s where we succeed in getting to that number,” Coach Degenhardt elaborated. “For the most part, the ones that are getting to that point are the ones putting in the extra work and working their tails off all season.”

Another big change this year may be a little more subdued than most had hoped. The NSAA has recognized girls wrestling on a provisional basis for the 2020-2021 season, but COVID-19 may have made the first season more difficult for girls wrestling to get rolling like fans had hoped.

“On a normal year, they probably would have had a girls division,” Degenhardt said of how girls wrestling would have been expected to work. “I know that a lot of those tournaments have been cancelled, along with JV, because they just want to make sure that varsity gets the matches first. I know there are going to be some girls-only tournaments. Schuyler is going to run girls and JV on Friday night and varsity on Saturday.”

Much of the girls’ first season is still shrouded in uncertainty. For example, the weight classes for girls wrestling are yet to be announced until a hydration assessment for all wrestlers has been examined.

This uncertainty has not hindered growth in the LHS girls wrestling team, however.

“We had four girls out for wrestling last year and this year we have more than ten,” Degenhardt said of girls wrestling enrollment at LHS. “We’ve more than doubled our numbers. I think if it was a full-blown girls sport we’d probably have way more than that, but we’re happy to have the girls we have and next year I think we’ll continue to add to the numbers we have now.”

No matter what happens with the season or the tournaments, whether the season is cut short or allowed to go all the way to Omaha in February, Degenhardt is glad he has the wrestlers he does and is proud of the program of which he is a part.

“We’ve got another strong group of freshmen coming in and a lot of scrappy guys,” Coach Degenhardt said in closing. “Every year we’re competitive. It’s fun to develop our younger kids and watch our older wrestlers take them under their wings and make them better. Not just better wrestlers but better people. That’s kind of been the culture of our program; to come together as a family. We don’t do things for ourselves. That’s why I like coaching here.”

Lexington’s first time on the mats this season will be at home on Friday, Dec. 4 when they host Plattsmouth at 7 p.m. The following morning they will travel to compete in the Cozad Invitational at 9:30 a.m.

ELWOOD – Like most schools, the mats in the Hi-Line wrestling room have been softened with use as the Bulls ready for their first chance at co…

Lexington wrestlers Francisca Walsch (left) and Kitzia Hernandez practice on a mat in the choir room at Lexington High School on Thursday, Nov. 19.  Enrollment in wrestling for girls has more than doubled since the NSAA announced a provisional girls wrestling season.

Ivan Lazo (left) and Daven Naylor spar in the wrestling room in Thursday's practice at Lexington High School.  Lazo and Naylor are both returning state qualifiers.