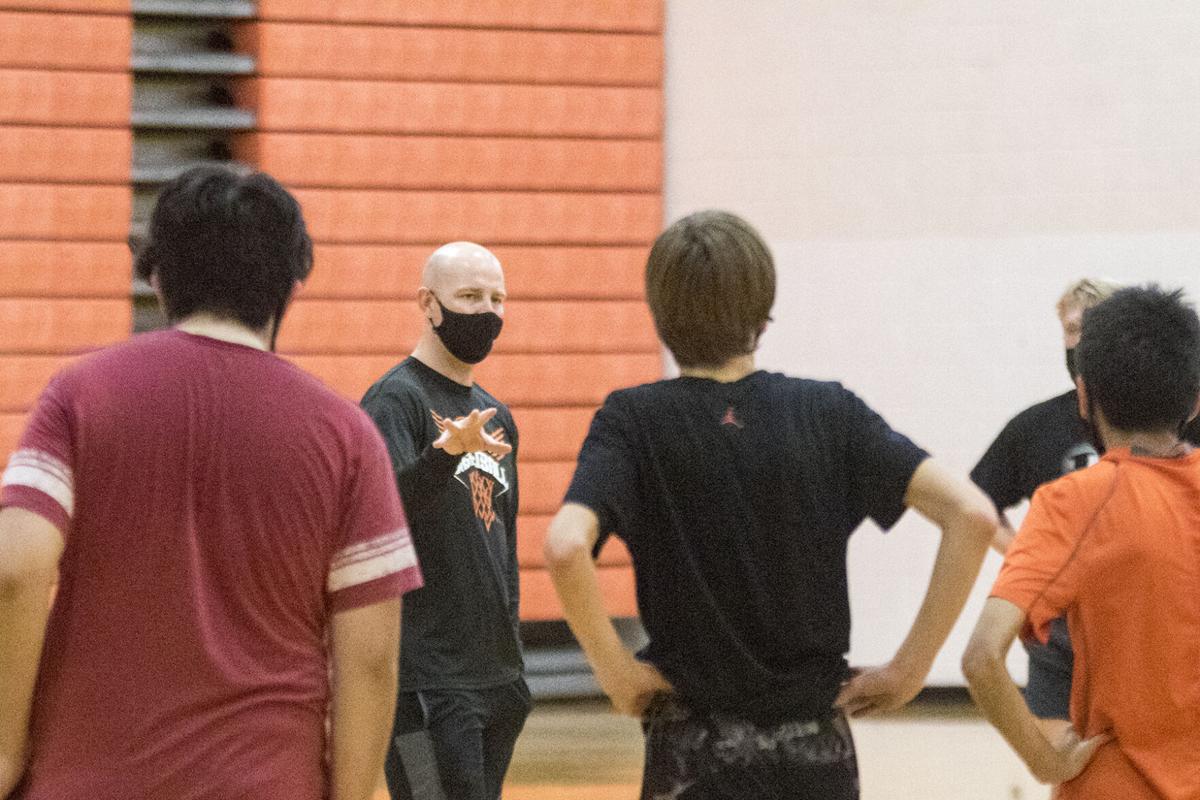 Lexington Minutemen head basketball coach Zach Jones tells the players on opening day of practice, while he’s impressed with their enthusiasm, they still have a long way to go and it will be a lot of hard work.  The players displayed tremendous energy in the first practice, hoping to earn a spot on the team before rosters are completed. 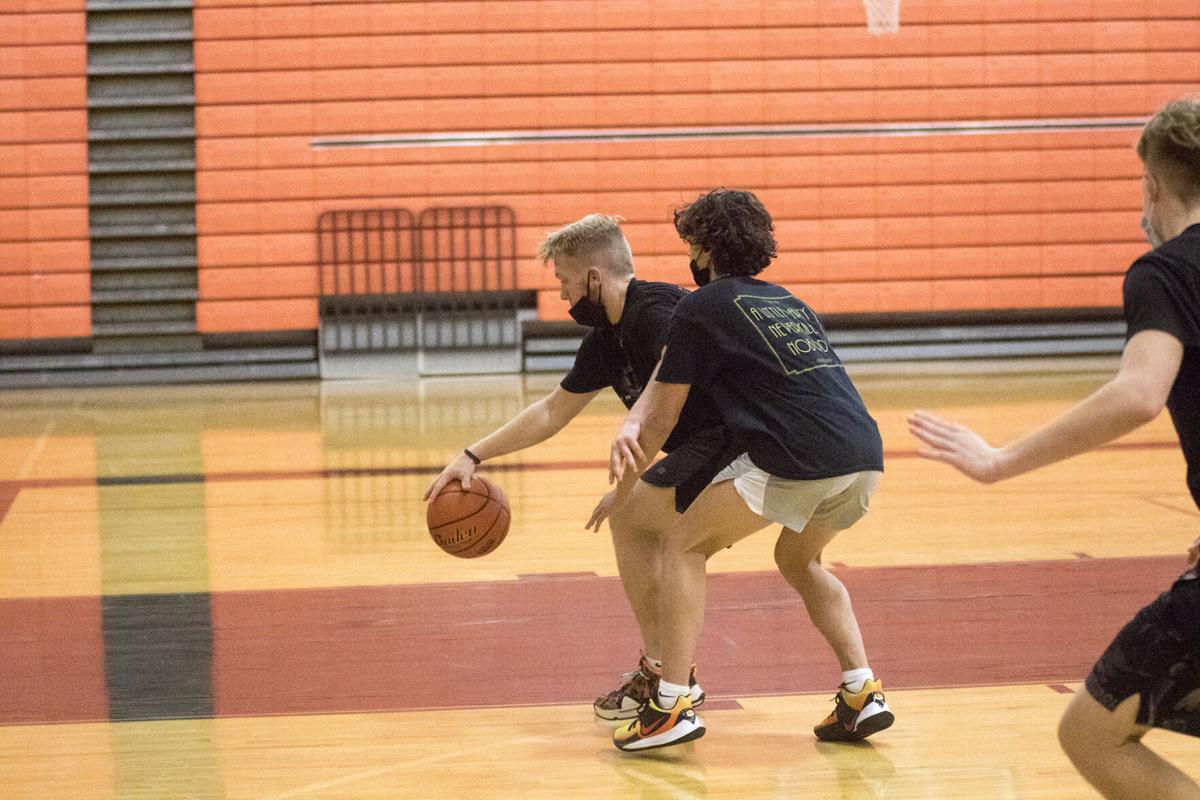 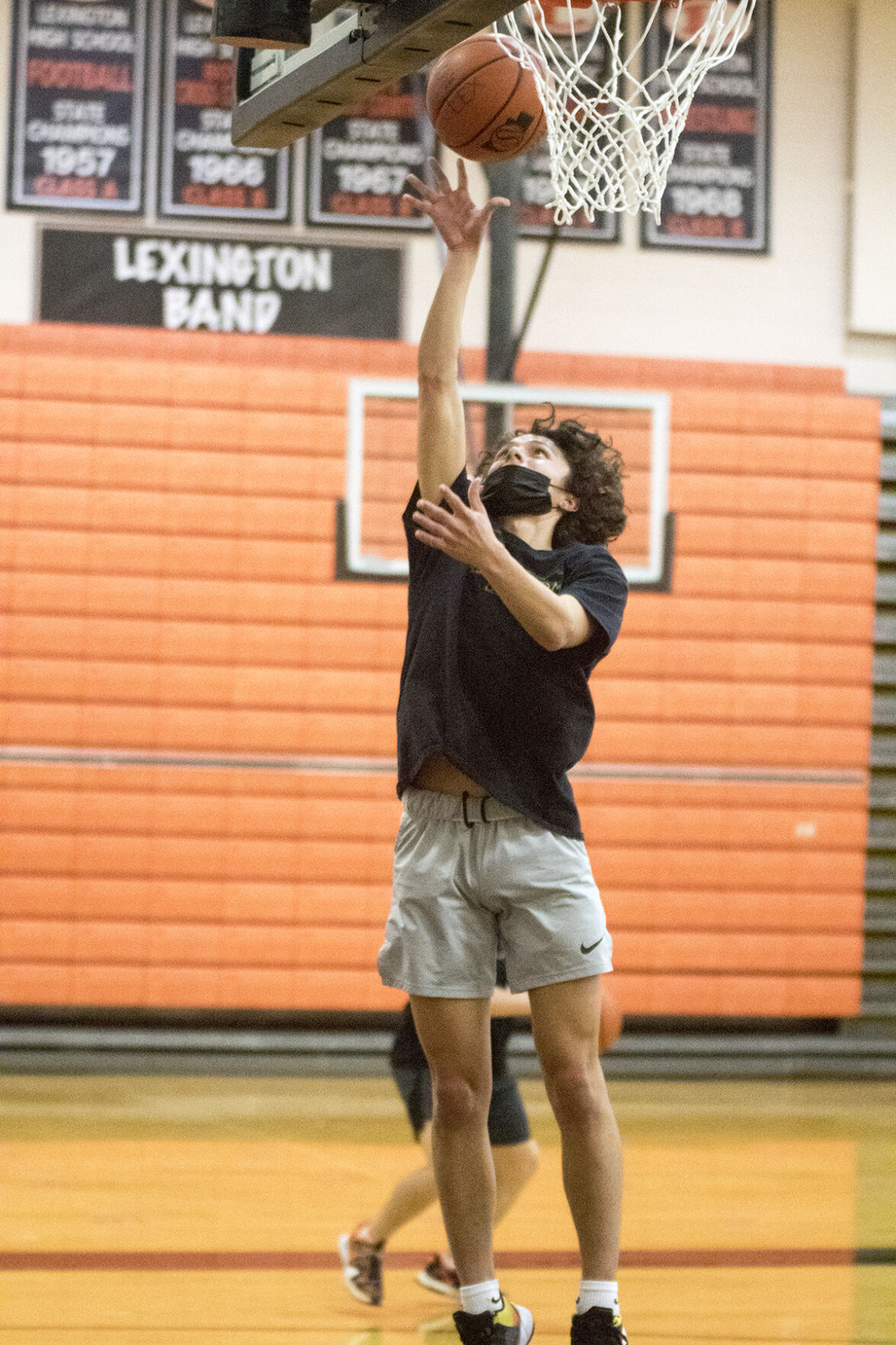 LEXINGTON – As suddenly as the beginning felt, the Fall sports schedule ending felt too soon. The only comfort sports fans have is to know Winter sports are about to begin. Monday, Nov. 16 was the first day of practice, as allowed by the Nebraska School Activities Association and the facilities at Lexington High School were alive with athletes preparing for their next season. The typical rooms being used such as the gyms and wrestling room, but the powerlifting team could be found in the parking lot with free-weights and the wrestlers expanded to the music rooms as well to thin gathering and keep athletes healthy.

Dividing into two smaller groups, the Lexington boys basketball team took advantage of their floor space in the west gym for their first day of practice. Head coach Zach Jones agreed to an interview to discuss the coming season for Minutemen basketball.

Coach Jones addressed what may worry some fans about a green roster’s debut.

“When you lose seven of your top eight players there’s always going to be concern about your lack of experience, especially when your junior and senior classes are pretty small in numbers,” Jones said of the roster for the 2020-2021 season. “Whenever you lose 85 to 90 percent of your scoring, the top two scorers in school history, you know you’re going to have to play a little different and you’re going to have to do different things to win. If these guys are willing to do that, I think we’ll still be competitive.”

Varsity teams are typically senior-heavy and peppered with juniors. The Minutemen, this year, will have to reach into their sophomore bench to supplement the smaller upper-classmen groups.

“Our sophomores are going to have to play,” Jones said with conviction. “We have seven sophomores coming back who are going to have to step-up into some big roles for us because we don’t have a lot of juniors and seniors. I’m confident in them. We’ve had several kids work really hard and improve. How that shakes out right now, I can’t really tell you. Ready or not, it’s time for our younger guys to come out and play against the big boys.”

Despite their age, Jones feels some of the sophomores that will be playing on the varsity roster have paid their sweat in their junior varsity games, last year.

“Our younger guys were really thrown into the fire last year. A lot of them had to play JV as freshman and they took their beatings a little bit, but I think that helped them with a little bit of experience,” Jones continued, optimistically. “I’ve got to say this group, they’ve got a lot to learn, but they improved a ton from last season to now. I know by February we’re going to improve even more.”

We’ve gone over what the Minutemen have lost in graduation. Let’s look at what they’ve retained:

“Last year we had five guys who could score at all five positions. This year, we’re going to have to be a little more patient and look for our scoring options,” Jones said. “Austin Friedrichsen is one of the best athletes in the state and he’ll be good in the lane. He’ll draw a lot of attention so we’ll have to have some guys that can make some open threes. If they don’t collapse, Austin should be able to finish quite a bit at the rim. Noah Converse and Anthony Rodriguez are seniors this year, as well. They’ve all played in the past and we’re looking for them to take some leadership, especially with ball handling and controlling the ball. We lost a lot of that, but we’ve got kids willing to work and willing to learn and I’m excited about that.”

While many coaches don’t like to look past their next opponent, several will have a game or tournament they are particularly excited to play. This year is different. Between keeping athletes healthy, directed health measures and the always-changing pandemic in the background, Jones is just looking forward to playing some basketball.

“I’m looking forward to taking each game as a gift,” Jones said in closing. “This has been a crazy year and we’re excited to play any games that we get and we’re going to play them hard. Like I said, we’re going to be a lot better in February than we are in November. All of us, including me, are going to have to repeat that a few times.”

The Minutemen will open their season with a home game against the Gothenburg Swedes on Thursday, Dec. 3 at 7:30 p.m.

Lexington Minutemen head basketball coach Zach Jones tells the players on opening day of practice, while he’s impressed with their enthusiasm, they still have a long way to go and it will be a lot of hard work.  The players displayed tremendous energy in the first practice, hoping to earn a spot on the team before rosters are completed.