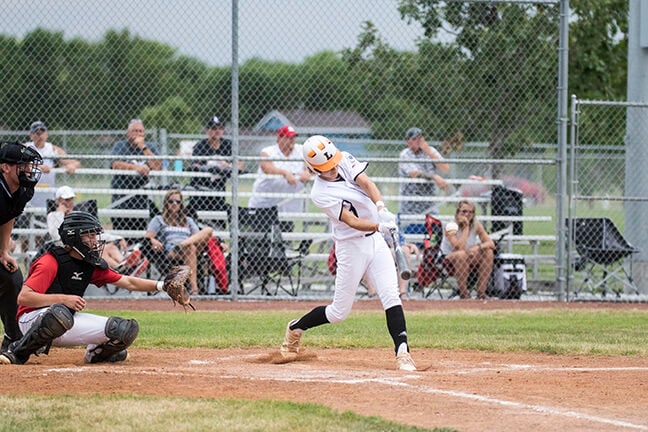 Anthony Rodriguez takes a swing at the ball in the first game with Norfolk on Saturday, July 18 in Lexington. 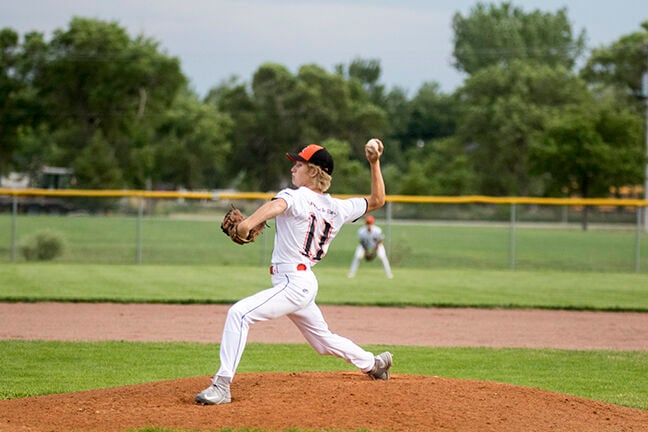 Greg Treffer on the mound in the first game of a doubleheader with Norfolk on Saturday, July 18.

Anthony Rodriguez takes a swing at the ball in the first game with Norfolk on Saturday, July 18 in Lexington.

Greg Treffer on the mound in the first game of a doubleheader with Norfolk on Saturday, July 18.

LEXINGTON – The Lexington Pinnacle Bank Baseball team suffered two losses at the hands of Norfolk on Saturday, July 18, dropping the first game 1-14, while narrowing the gap slightly in the second, 5-14.

In game one of the doubleheader, Norfolk put runs on the scoreboard first, tallying six in the bottom of the second inning. Lexington’s response in the top of the third was a single run, scored by Landen Johnson, was batted in on a ground ball to center field hit by Efren Aguirre.

Lexington fared better in the second game, keeping up with the Norfolk boys through the first three innings. The orange and black fell behind Norfolk in the last two innings, struggling to hold them at the plate. With nine unanswered runs in the fourth and fifth innings, Norfolk claimed a win over Lexington, 5-14.

“We played the younger guys in the first game,” Lexington head coach Vince Leibert began in an interview. “We started Vinny (Leibert) in the first game and he came out earlier than we expected. We put Greg (Treffer) in and they hit a couple of homers off of him and broke it open. So we played a lot of subs in the rest of the game to conserve some pitching for the second game.”

Leibert acknowledged his players’ offensive push in the second game and was happy with their tenacity. As far as for the losses, he explained that their success hinged on a key position on the field and their lack of players to fill it.

“The second game was going really well,” Leibert said. “I think we tied them up in the third or fourth. Then, to be honest with you, we just ran out of pitchers. We ran out of firepower but it was kind of indicative of what we’re capable of doing.”

Coach Leibert’s memory served him well, as Pinnacle Bank tied the Norfolk boys 5-5 at the third inning’s close. He went on to explain their troubles from the mound in the Saturday doubleheader.

“We’ve got three solid pitchers in the older kids that we have to try to get a lot of innings from,” Vince pointed out. “All three of them have been dealing with injuries and soreness. For safety, we lifted them, put in some subs and the game just got away from us.”

As for the second game, Leibert appeared to be hopeful with their performance under pressure against a good program.

“I was actually fairly happy,” Leibert said of the games. “I hate to be happy with losses but Norfolk split with Kearney and Hastings last week, so we weren’t too bad running with those guys.”

When asked about the positives from Lexington’s meeting with Norfolk, Coach Leibert pointed out several things he was proud to see from his players.

“Saturday, our guys left feeling pretty good that our offense started to go,” Vince praised his team. “They hit the ball well, we didn’t do a lot of striking out against some fairly good pitchers, we were putting balls in play and they’ve had more fun playing ball.”

Lexington Baseball will be at home for another doubleheader on Wednesday, July 22 when they rematch North Platte. Games at Optimist Field are set to begin at 5:30 p.m.