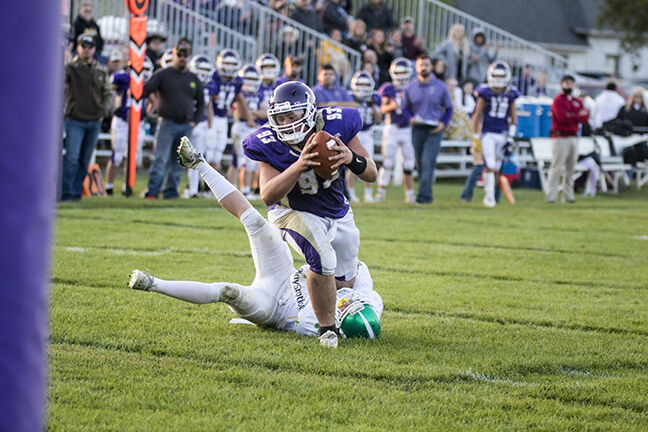 S-E-M senior Carson Rohde steps over a Spalding Academy defender before diving into the end zone for a touchdown on Friday, Sept. 11. 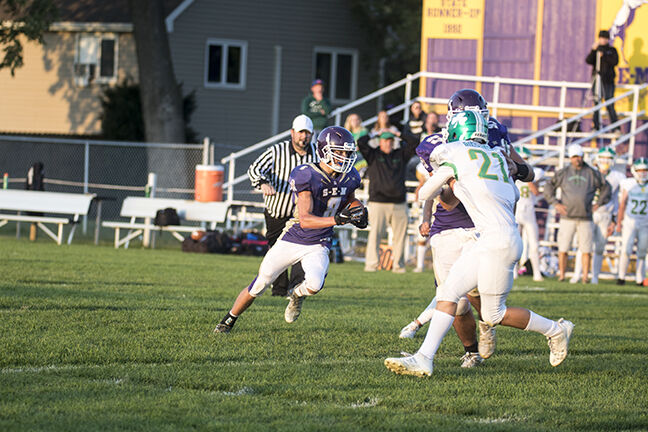 LEXINGTON - Area football teams saw some success under the Friday night lights, both on the road and at home. Aside from Lexington’s 45-25 win over South Sioux City, the Cozad Haymakers traveled to Sidney to take a huge 47-0 win over the Red Raiders. The Hi-Line Bulls went on the road to Sutherland to trade blows with the Sailors where a powerful second half put the Bulls ahead for a 28-12 win. Overton welcomed the formidable Pleasanton Bulldogs on Friday. Once unleashed, the Bulldogs run up a 6-52 score for a win over the Eagles. The Sumner-Eddyville-Miller Mustangs were at home on Friday, hosting the Spalding Academy Irish. The Irish fell to the Mustangs by a razor’s edge, 66-62.

A combination of 95 passing yards and 264 rushing yards for 13 first downs gave the Haymakers what they needed for a win over the Sidney Red Raiders on Friday. The Cozad boys put four players in for seven touchdowns in the game, five of those touchdowns scored in the first half of the game.

While Sutherland may have had the upper hand coming out of the first half with Hi-Line, 6-12, the Bulls put together a strong second-half offensive scoring three touchdowns. Hi-Line found their defense, somewhere in the half time break, and the Bulls halted the Sailors on every drive in the last half of the game.

Scoring points for the Bulls were seniors Conner Schutz and Kody Keller, each with a touchdown and conversion, while Cooper Ray and Trevor Jorges each scored a touchdown.

Pleasanton scored the bulk of their points in the first half against the Overton Eagles in Friday’s game. Overton went scoreless in the first half, trailing 0-40 when the teams took the field for the second half. The Bulldogs scored another touchdown in the third quarter and another for seven points in the fourth. The Eagles were able to sneak a ball through in the fourth and final quarter for six points, suffering their third loss of the season, 6-53.

The game between the Mustangs and the Irish was all but even keeled. The separating quarter for the Mustangs showed in the second quarter when S-E-M put 34 points over Spalding Academy’s 19. The Irish outscored the Mustangs in the third quarter, but not enough to overcome the Mustangs’ 15-point lead.

When the dust settled in Sumner, the Mustangs had edged a four-point lead to claim their second win of the season, 66-62.

Minutemen come away with big win over South Sioux City

LEXINGTON – The Lexington Minutemen earned a win in their first ever meeting with the South Sioux City Cardinals on Friday, Sept. 11.  An expl…

Cozad Volleyball celebrates their first win of the season

COZAD – The Cozad Haymakers Volleyball squad has earned their first win at their home tournament.  After a 0-2 loss to Centura and another 0-2…

CAMBRIDGE – The Overton Eagles Volleyball girls are perched pretty with an 8-1 season after a 3-1 win over the Cambridge Trojans on Thursday, …

Another one in the ‘win’ column for Lexington Volleyball

Minutemaids take their seventh win of the season over Hershey

Three more wins for the Eagles

OVERTON – The Overton Eagles chalked three more wins to their season after a 3-0 win over Maxwell on Tuesday, Sept. 15 and two more wins at a …

S-E-M senior Carson Rohde steps over a Spalding Academy defender before diving into the end zone for a touchdown on Friday, Sept. 11.