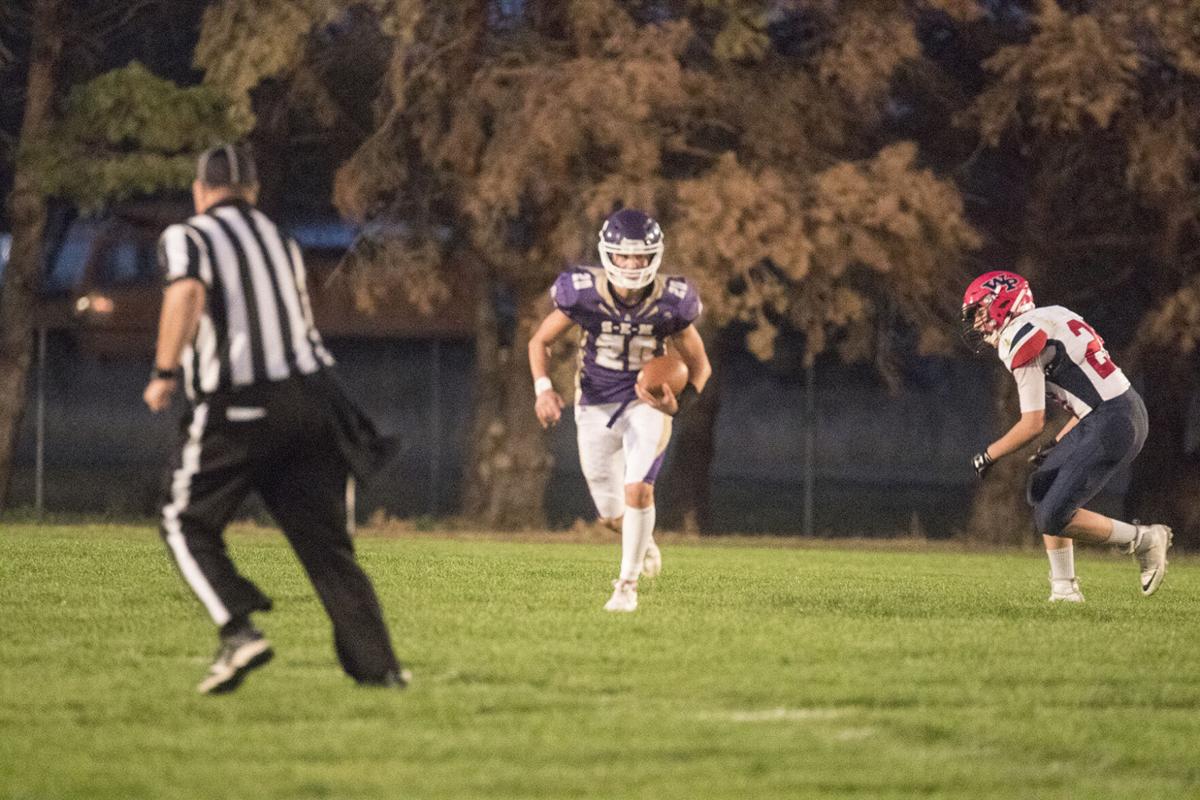 Noah Eggleston takes the chance on weaving through the Wauneta-Palisade Broncos in the Friday, Oct. 9 game where the Mustangs claimed a 54-13 win, their fifth of the season. 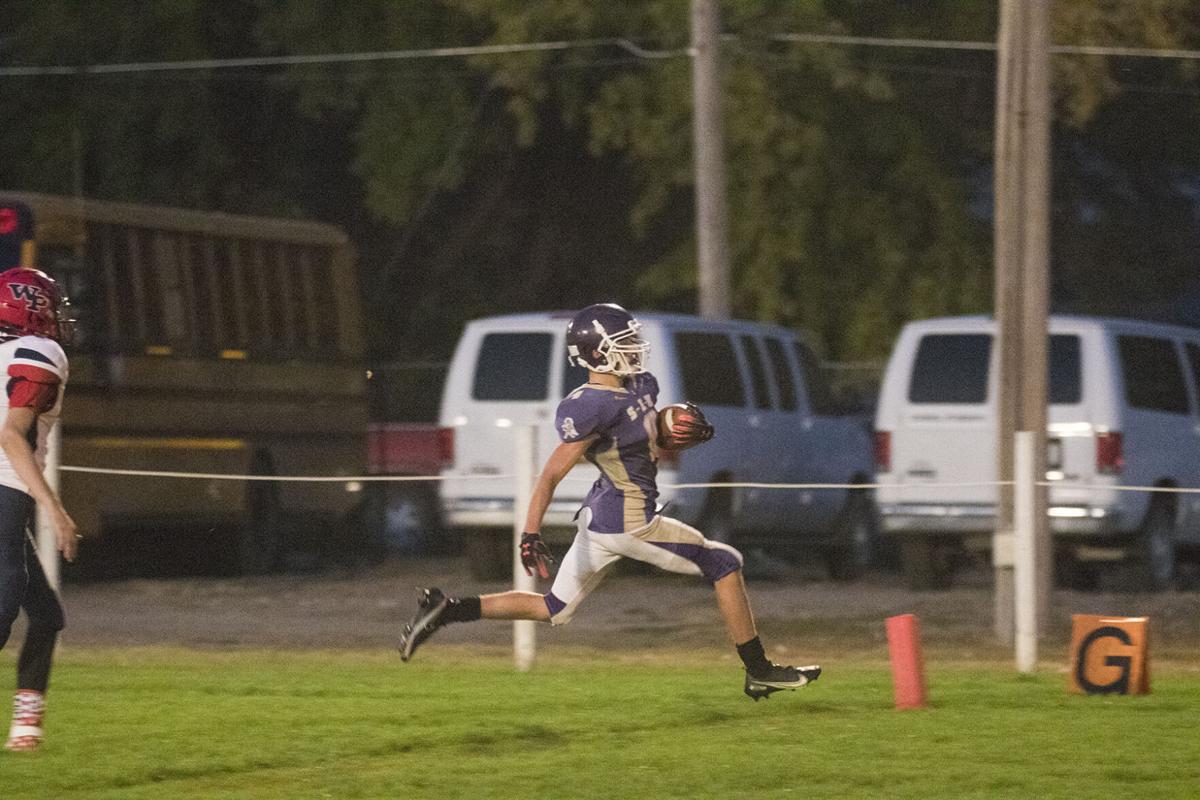 Noah Bydlon runs the Mustangs’ second touchdown into the end zone in the Friday, Oct. 9 win over Wauneta-Palisade, 54-13.

LEXINGTON – Area Football teams were largely away in Friday’s games with the Sumner-Eddyville-Miller Mustangs the only teams to play at home. Across the five teams in the Lexington area, three came home with wins and two suffered losses far from home. Lexington took a loss to the Scottsbluff Bearcats, 14-33, Cozad claimed a win over Minden, 38-15, Hi-Line suffered a crippling defeat in Benkelman to Dundy County-Stratton, 0-52, Overton earned a road win over Brady, 33-22 and S-E-M took a win over Wauneta-Palisade, 54-13.

The Lexington Minutemen traveled to the panhandle to toe the line with the Bearcats on Friday, Oct. 9. The Minutemen came away with a loss in the confrontation, 14-33.

The Bearcats took off to an early lead in the first quarter, scoring two touchdowns for 14 points over one for the Minutemen for seven points. The teams went scoreless in the second quarter to go 7-14 into the halftime break, Bearcats leading.

Scottsbluff extended their lead in the third quarter of the game by scoring two more unanswered touchdowns for 13 points. Lexington wouldn’t respond until the fourth quarter when they edged the Bearcats, 7-6. Ultimately, the Scottsbluff strong rushing game outpaced the Minutemen and Lexington fell, 14-33.

The Minutemen ground advances were led, once again, by senior Alex Ramos who gained 96 rushing yards on 20 carries for both of Lexington’s touchdowns. Behind Ramos was junior Hunter Stewart with six yards on two carries and senior Harold Pineda with three yards on one carry.

The loss to Scottsbluff brings the Minutemen to a 2-5 season as they head into the final weeks of the season. The Minutemen are scheduled to don their gear again this week on Friday, Oct. 16 when they host the 1-5 Alliance Bulldogs at Ray Ehlers Stadium. Kick-off for Friday’s game is set for 7 p.m.

The Cozad Haymakers football boys traveled to Minden to take a shot against the Minden Whippets. Their trip was a fruitful one as they returned home with another win, 38-15.

While the Haymakers appeared to be having a hard time with their PATs in the first half, they had no trouble finding the end zone for a big win over the Whippets. Cozad put up two touchdowns for 12 points in the first quarter, outsourcing Minden with seven points. The Haymakers punched another two through for another 12 points while halting the Minden advances to take the game into the half-time break, 24-7.

The two teams matched in the third quarter, each gaining one touchdown for eight points, but the Haymakers extended their lead with a 6-0 fourth quarter for a 38-15 win.

Cozad junior Nolan Wetovick captained the win over Minden with four completions on nine attempts for 73 yards and one touchdown. Receiving for Wetovick was junior Jacob Weatherly with 43 yards on two receptions, senior Jacob Engel with 19 yards on one reception for one touchdown and junior Paul Cole with 11 yards on one catch.

The Rushing yards are where the Haymakers won their game in Minden with Weatherly leading the way with 160 on 12 carries and two touchdowns. Wetovick gained 134 yards on 15 carries for two more touchdowns and Jacob Engel drove the ball 19 yards on five carries. Cozad Freshman Monty Brooks recorded a touchdown with 7 yards on three carries and ran a conversion.

Cozad Haymaker football now sits at a 6-1 season and will be back at home on Friday, Oct. 16 at 7 p.m. when they go head to head with the 2-5 Broken Bow Indians.

The Hi-Line Bulls took a trip to Benkelman to have a game on the gridiron with the Dundy County-Stratton Tigers on Friday, Oct. 9. The Bulls were blown out as they came away with a loss to the Tigers, 0-52.

DCS wasted no time putting the hurt on the Hi-Line boys with 16 points in the first quarter and 22 points in the second for a 0-38 lead at halftime. The Tigers cooled their jets a little in the second half scoring one touchdown for six points in the third quarter and one more in the fourth for eight points. Dundy County-Stratton didn’t let up on their defense, however, and halted Hi-Line’s advances.

The Bulls’ season drops to 4-2 after the loss to Dundy County-Stratton. Next, the Bulls will head to Trenton to try their might against the 5-2 Hitchcock County Falcons on Friday, Oct. 16 at 7 p.m.

The Overton Eagles traveled to Brady for some football on Friday. The game played evenly in the beginning and favored the Brady boys until the fourth quarter when Overton made a push for a 33-22 win.

The two teams matched in the first quarter, each scoring a touchdown for eight points. Brady took a small lead in the second after scoring 6 points over Overton’s three, and the Eagles in blue fell behind, 11-14.

After the halftime break Overton dropped behind by five points as they scored six points to Brady’s eight, to begin the fourth and final quarter with a score of 17-22. The Overton boys put a stop to Brady’s advances in the fourth quarter and kicked their own offense into high gear, scoring 16 points to surpass Brady and take a lead at the end of regulation time, 33-22.

The Bulk of Overton’s gains were on the feet of freshman Will Kulhanek with 250 yards on 25 carries and two touchdowns. Senior Max Kulhanek gained 45 yards on 18 carries for two touchdowns.

Defensively, junior Wyatt Ryan led in tackles with a total of 15, including eight solo and seven assisted.

The Overton Eagles improved their season to 2-5 with the win over Brady. Their next game will be on home field when they welcome the 2-5 Axtell Wildcats on Friday, Oct. 16 with kick off set for 7 p.m.

The Mustangs welcomed the Wauneta-Palisade Broncos on Friday, Oct. 16 and earned their fifth win of the season. Big pushes in the mid-game sent the S-E-M boys into a 54-13 win.

The Mustangs took a lead early in the game putting eight points on the scoreboard over the Broncos six. S-E-M deflected the Wauneta-Palisade offensive in the second quarter while punching through three touchdowns and forcing a safety for a total of 22 points. The Mustangs led going into the half, 30-6.

Senior Carson Rohde opened the second half with a touchdown on the kick-off return, 40 yards. Another touchdown in the third quarter extended S-E-M’s lead to 46-6. The two teams each scored a touchdown in the fourth quarter; S-E-M’s for eight points over Wauneta-Palisade’s 7. The Mustangs put away a big win over the Broncos, 54-13.

S-E-M sophomore quarterback Noah Eggleston led the Mustangs with four completions on seven attempts for 71 yards and one touchdown. Eggleston’s top receivers were senior Aaron Hernandez with 37 yards on two receptions and sophomore Jason Guthard with 26 yards on one reception.

Carson Rohde led in rushing yards with 167 on 13 carries for four touchdowns and following him was senior Noah Bydlon with 29 yards on six carries for one touchdown.

The S-E-M Mustangs win extend their season to 5-1 before their next game on Friday, Oct. 16 when they travel to Bartley to face the Southwest Roughriders. The game in Bartley is slated to begin at 7 p.m.

LINCOLN - The NSAA State Volleyball Championships are in the books and the Overton Eagles finished the tournament in third place in Class C2. …

Eagles win first round at state

Noah Eggleston takes the chance on weaving through the Wauneta-Palisade Broncos in the Friday, Oct. 9 game where the Mustangs claimed a 54-13 win, their fifth of the season.

Noah Bydlon runs the Mustangs’ second touchdown into the end zone in the Friday, Oct. 9 win over Wauneta-Palisade, 54-13.