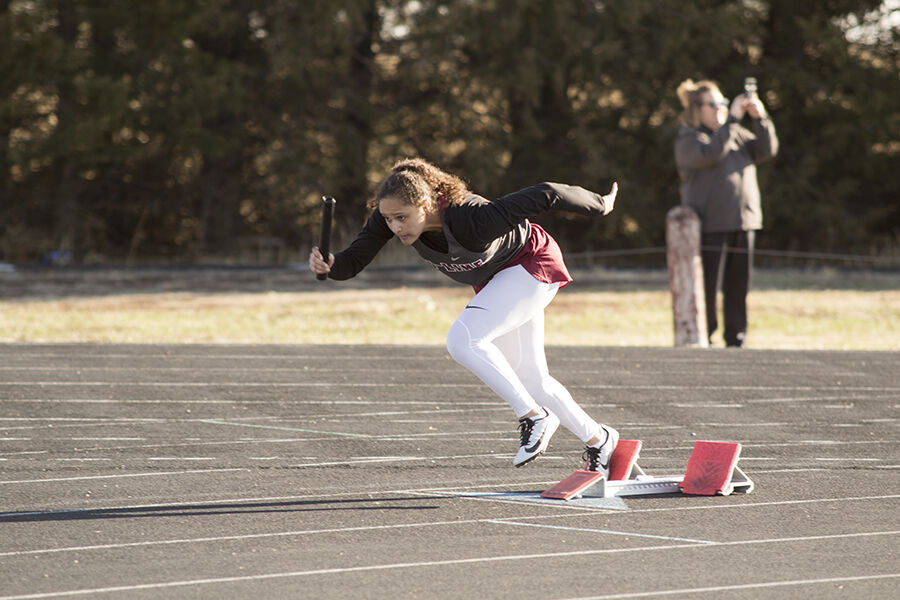 Hi-Line’s Cece Lerdall explodes off the line at the gun in the girls 400 meter relay at the Thursday, March 18 triangular in Elwood. 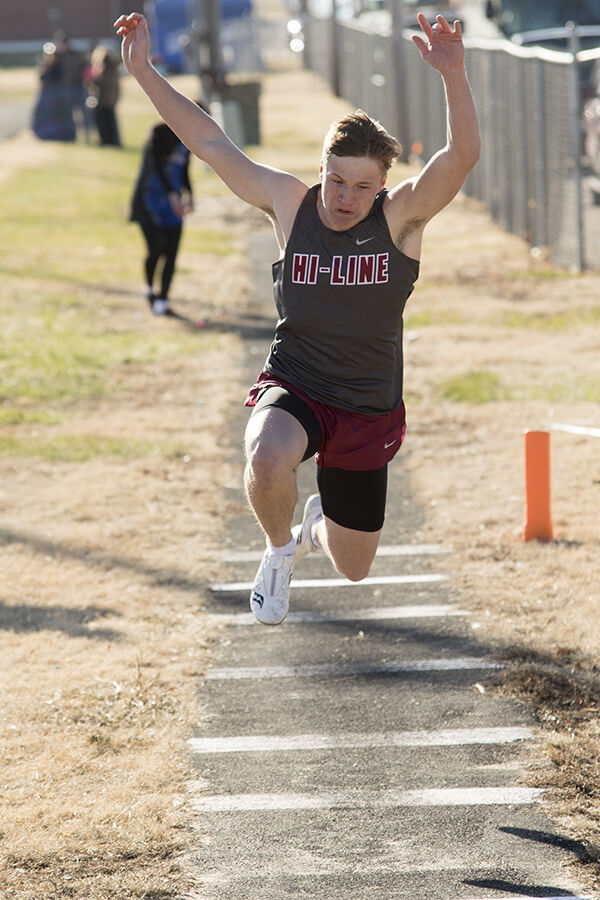 Bulls take wins at home triangular over Arapahoe and Southwest

ELWOOD – Hi-Line took a definitive win at their season opening triangular at home where they hosted Arapahoe and Southwest on Thursday, March 18. The Hi-Line Boys won the triangular with 92 points as a team while Southwest followed in second with 43 and Arapahoe took third with 35. The Bulls girls took the win as well with a team score of 60 points over Arapahoe with 44 and Southwest with 40 points.

Standouts at the triangular for the Bulls were many, but here are the top points producers for Hi-Line on Thursday:

Trevor Jorges was a half second faster than Isaiah Bullis in a one-two finish for the bulls in the 200 meter dash. Jorges finished first with a time of 24.60 seconds. Ryker Evans was nearly seconds ahead of the second place in the 400 meter dash, finishing in 57.40 seconds. Campbell Schutz of Arapahoe followed him in second with a time of 1 minute and one second flat.

Drew Knoerzer took first place for the Bulls, both in shot put and discus with a 37’2” shot put and a 116’6” discus throw. His throw in the discus surpassed his second place teammate, Ben Tiede by over 20 feet, who threw a 96’3” throw. 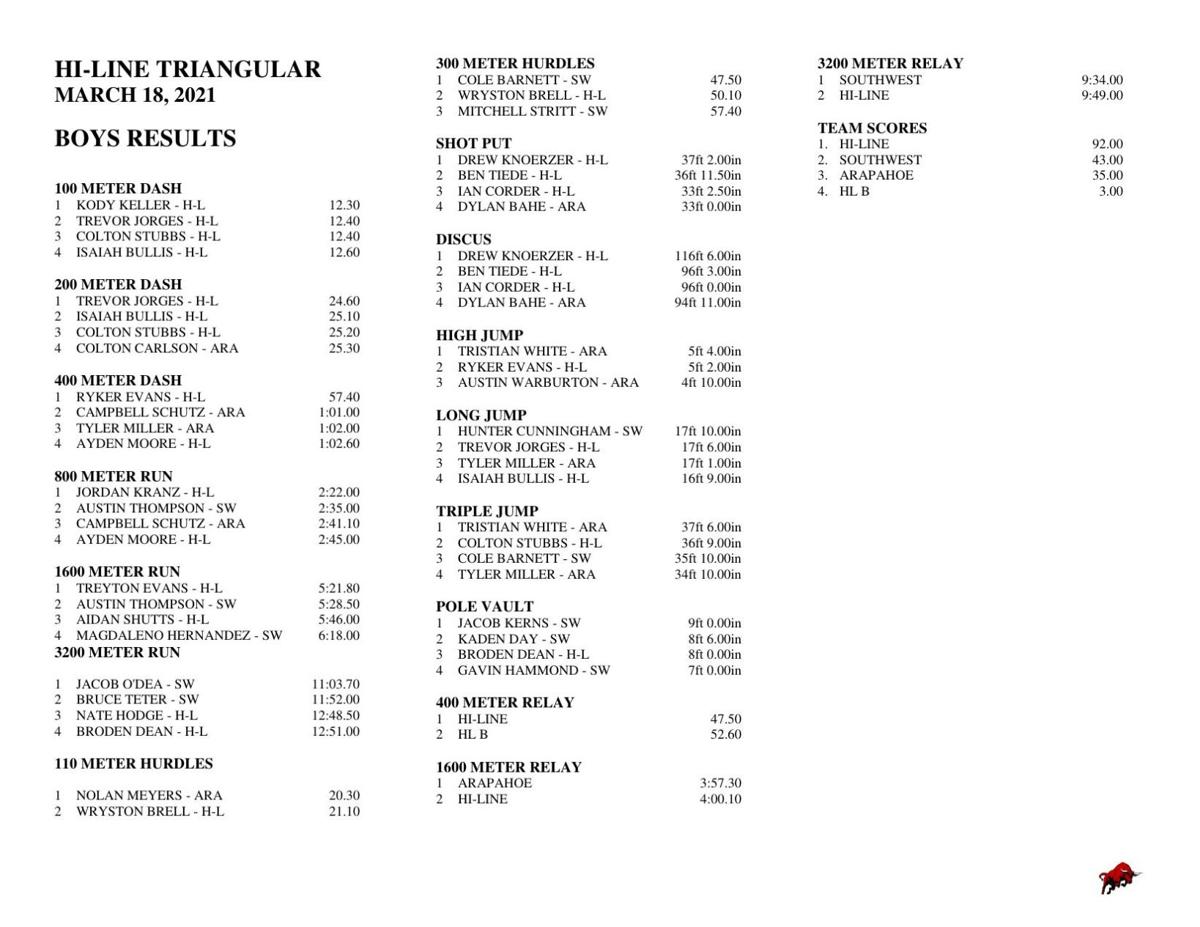 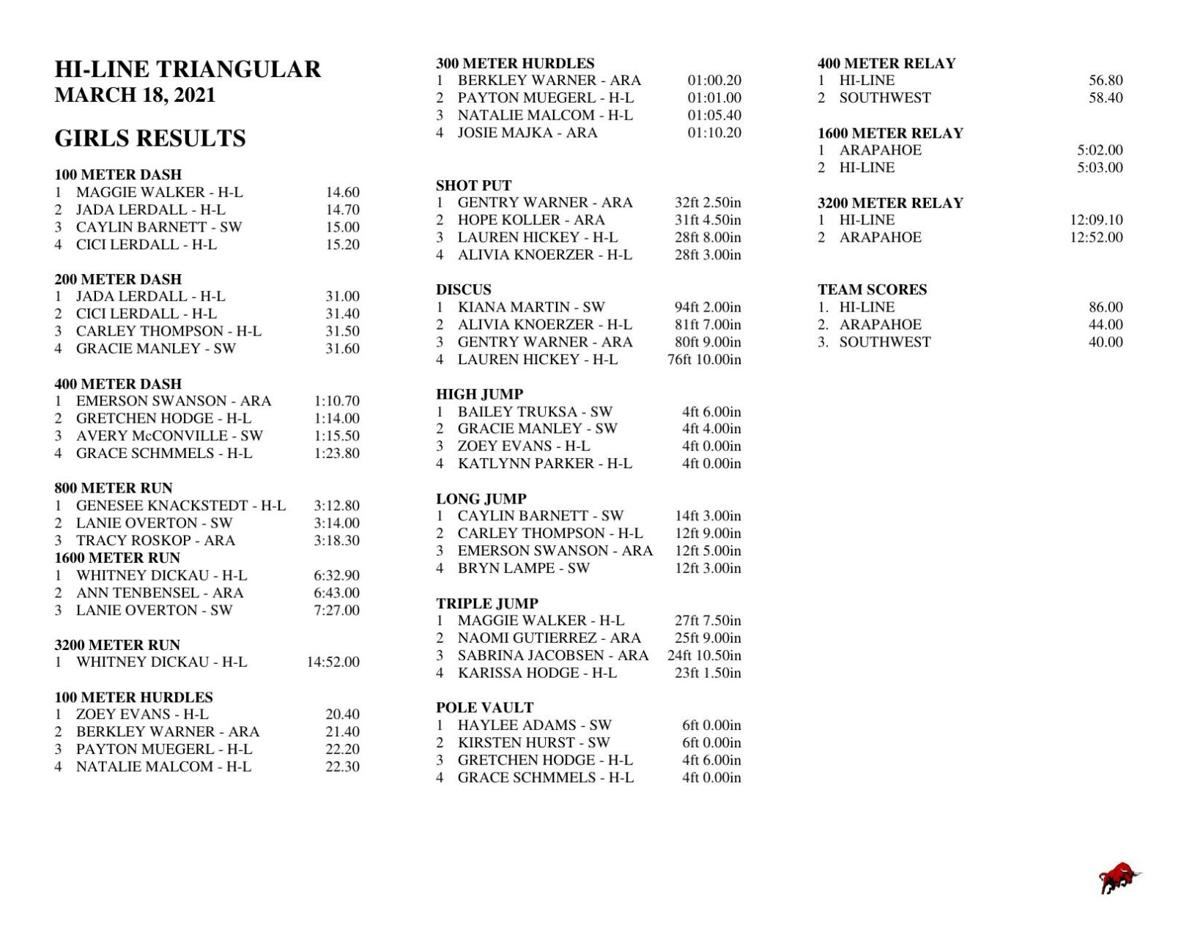 Congratulations to the Hi-Line Bulls on their wins and for kicking off the 2021 Track and Field season for Lexington area schools.

Which men's college basketball programs should we keep an eye out for next season?

Which men's college basketball programs should we keep an eye out for next season?

LEXINGTON – Lexington Minutemaids tennis hosted their home invite on Tuesday, April 13. McCook took first place across the board, but the Minu…

GRAND ISLAND – The Lexington track and field teams competed in the Grand Island Invitational this week on Thursday, April 8, where the Minutem…

Taking it to the Bearcats

Lexington Soccer splits games at Kearney with the girls falling in a close 0-1 game; boys follow with a 2-1 win over Bearcats

KEARNEY – The Lexington Minutemaids tennis team met with the Kearney Catholic Stars on Tuesday, April 6 in Kearney, where the Minutemaids took…

Hi-Line’s Cece Lerdall explodes off the line at the gun in the girls 400 meter relay at the Thursday, March 18 triangular in Elwood.