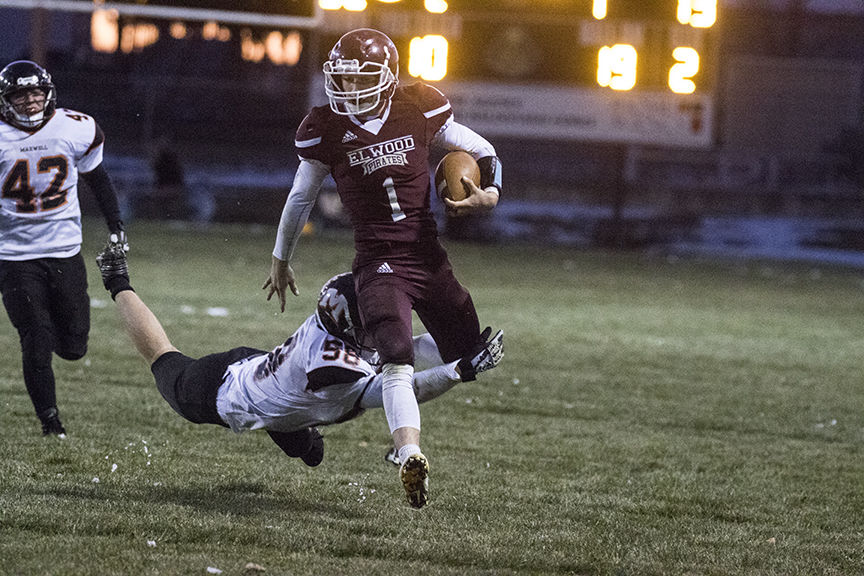 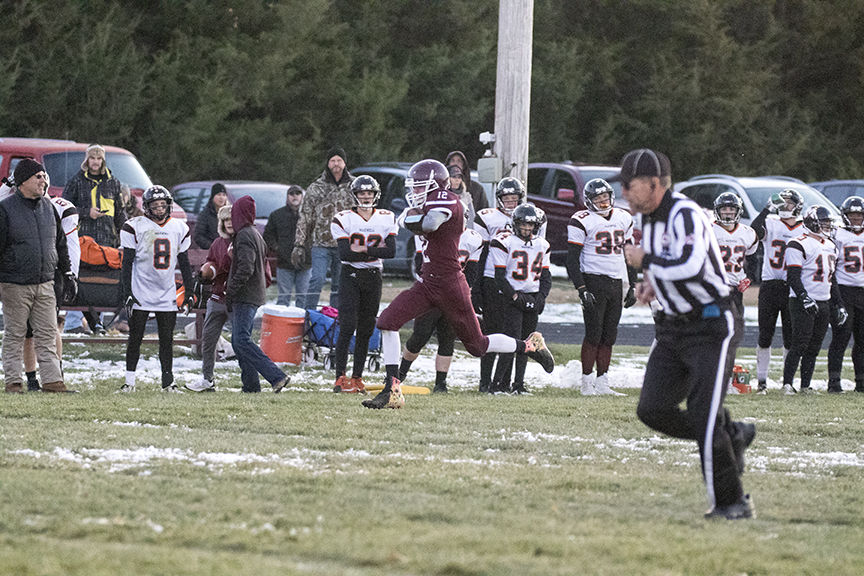 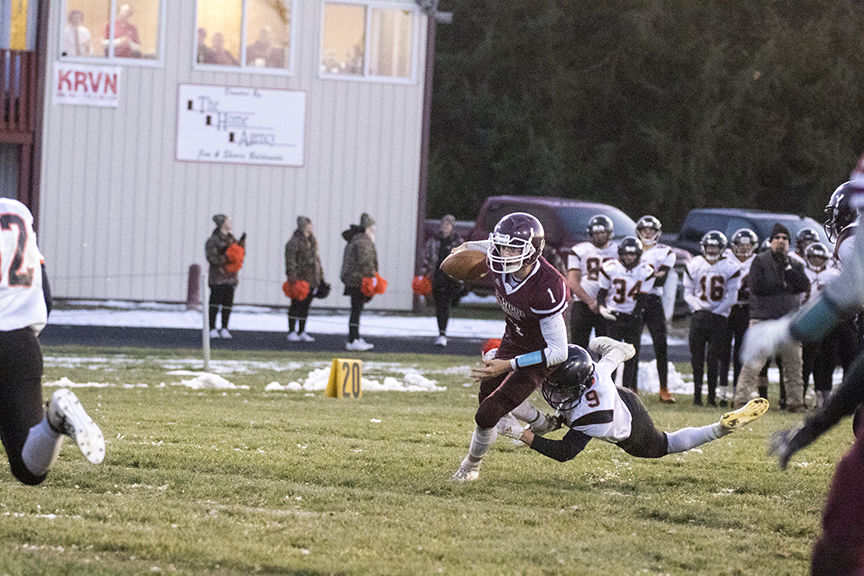 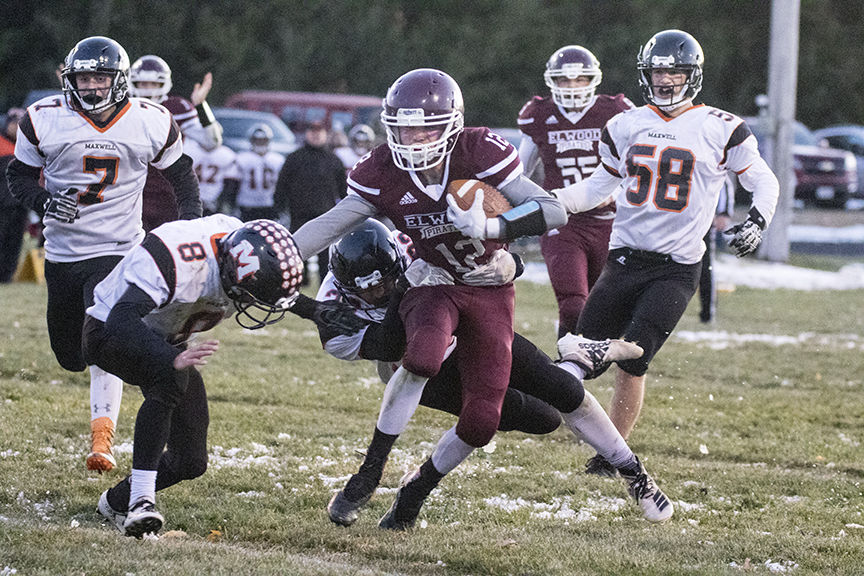 ELWOOD - Playoffs are here, and the Elwood Pirates were one of two area teams set to start the football post season, hosting the Maxwell Wildcats in Elwood. The Pirates will continue their postseason trek after a massive 86-25 victory over Maxwell.

Persistence and unpredictability gave the Pirates a huge advantage in the Halloween playoff opener. Utilizing a majority of their players in an erratic pattern of offensive plays made the Pirates an insurmountable foe for the Wildcats in the end.

Maxwell drew first blood in the confrontation, despite the heavy loss, scoring their first touchdown with just under seven minutes left in the first quarter. In the return drive, Elwood senior quarterback Conner Schutz completed an eight yard pass to Trevor Jorges. The Pirates, true to form for the season completed the conversion as Schutz ran the ball past the Wildcats’ line to take a lead, 8-7.

Hank Green scored the second touchdown for the Pirates on a four yard carry and, again, Schutz carried the successful conversion, giving the Pirates an extended 16-7 lead over Maxwell as the first quarter came to a close.

Maxwell found their second touchdown three minutes into the second quarter but their conversion attempt was halted by the Pirates. In response, Elwood senior Zacob Evans received the Wildcats’ kickoff and took it straight in for a touchdown. Schutz, on the conversion carry, stretched the length of his body under heavy pressure from the Maxwell defense to break the ball over the end zone threshold, putting the Pirates in a 24-13 lead over the Wildcats.

Maxwell looked to be making some strides in their offensive when their momentum was interrupted by Timmy Smith who intercepted a pass from the Wildcats’ quarterback, putting the wind into the Pirates’ sails, once again.In short order, Schutz tacked another touchdown onto his season and yet another two point conversion to give Elwood a 32-13 lead with just over two minutes left in the half.

The Pirates wouldn’t quit there, before the halftime buzzer sounded the Pirates had regained possession of the ball and driven down field for a third touchdown in the second quarter with just 36 seconds left in the half. The touchdown was scored by Jorges and Schutz bulleted a pass to Jorges for the two point conversion. The Pirates put a pin in the first half and took the locker room with a big 40-13 lead.

Elwood wouldn’t let up in the second half and ran with their momentum scoring their first touchdown in just 29 seconds, scored by Jorges with a conversion carry by Schutz. The effort for Maxwell was beginning to appear futile under the pressure of the Pirates’ offense as they fell back, 48-13.

The Wildcats then scored their third touchdown of the game but were curbed on their conversion attempt. Maxwell made little headway on the Pirates’ lead as they brought the score to 48-19. Conner Shutz and Hank Green responded with a touchdown and a conversion to leave the Wildcats further behind, 56-19.

With just over six minutes left in the third, Schutz fired yet another pass to Jorges for an additional touchdown with Hank Green scoring another two pointer after the touchdown. Elwood extended their lead to 64-19.

In the Wildcats’ return drive, the Pirates forced Maxwell to a fourth and 11 with just a few minutes left in the third. Maxwell fielded it’s punting unit and kicked the ball to Elwood’s 15 yard line where it was caught by Zacob Evans. Evans bounced from hash to hash as he made his way to the end zone for his third touchdown of the game. Isaiah Bullis’ attempt to Jorges was the first missed conversion attempt of the game for the Pirates but they still led, 70-19.

As Maxwell began to make a little headway in their return drive, Jadeyn Kohl vaulted onto yet another Wildcats fumble and regained possession for the Pirates as the clock ran dry on the third quarter.

Maxwell and Elwood went scoreless in the first nine minutes of the fourth quarter with a running clock. With just under two minutes left on the clock the Pirates ran a fullback trap, Bullis with a handoff to Carson Reiners for the carry into the end zone. A repeat of the play gave Reiners eight points on the board, personally, putting the Pirates up, 78-19.

Dalton Whisenhunt scored the final touchdown for Maxwell on the kick-off return with short time left on the game clock to nibble at the Pirates’ lead, 78-25. Their two point conversion was stopped by Elwood.

With 29 second left on the clock, Zach Dickau recovered a Wildcats fumble and took it in for another touchdown. Reiners, running up the middle, carried yet another two point conversion in for the Pirates. The Pirates held the remainder of the game for a huge victory, 86-25.

Elwood moves on to the second round of playoffs. The fourth seeded Pirates (8-1) will host, once again, on Wednesday, Nov. 6 when they welcome Central Valley (9-0).