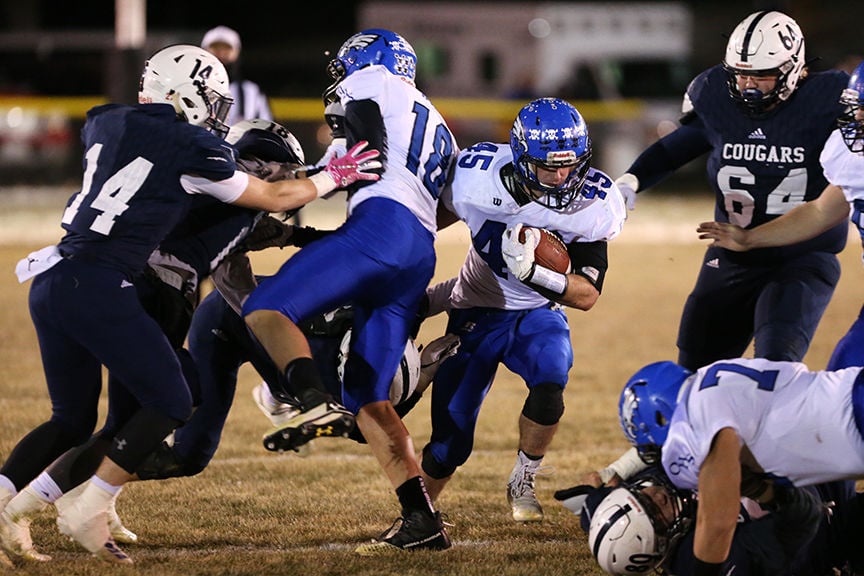 Overton’s Ryan Lauby breaks through the middle of the lines to route toward the end zone in Tuesday’s playoff game in Wolbach.  The eighth seeded Eagles took another upset win over the fifth seeded Central Valley Cougars, 22-14.  Lauby carried the ball 31 times for a total of 148 yards and two touchdowns. 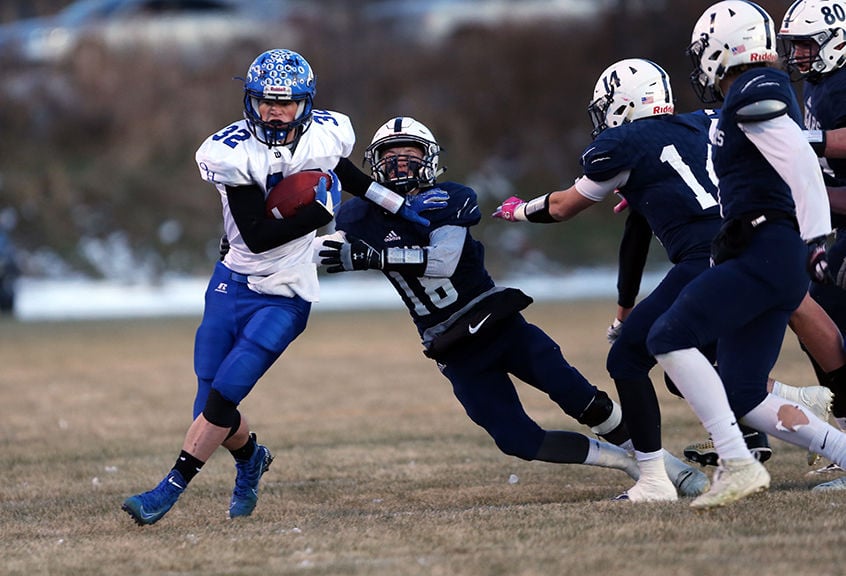 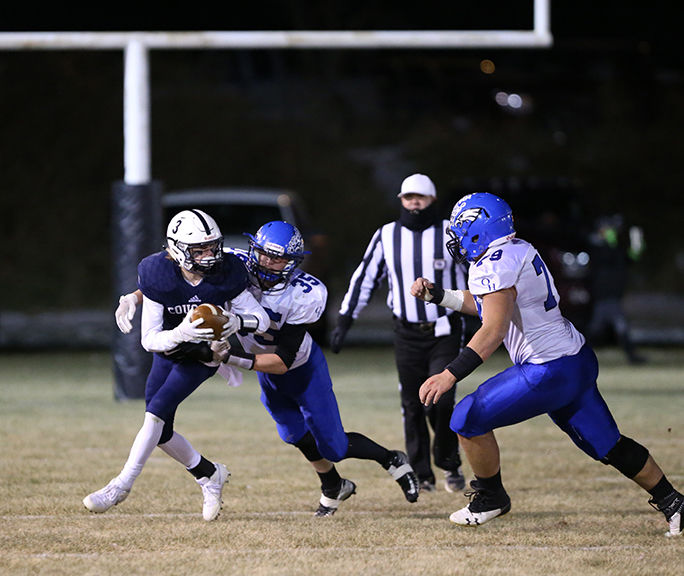 Overton’s Ryan Lauby breaks through the middle of the lines to route toward the end zone in Tuesday’s playoff game in Wolbach.  The eighth seeded Eagles took another upset win over the fifth seeded Central Valley Cougars, 22-14.  Lauby carried the ball 31 times for a total of 148 yards and two touchdowns.

WOLBACH – The top half of the Class D2 bracket in Nebraska football playoffs is torn-up and discarded. Top seeded teams have fallen to teams that are not lesser teams, but teams that want the state championship more. The evidence is in a meeting between the eighth seeded Overton Eagles and the seventh seeded Pleasanton Bulldogs in the semifinal game, set for Monday, Nov. 18, to decide who will play for the championship in Lincoln at Memorial Stadium.

Pleasanton found themselves looking forward to another game with the Bulldogs after a 22-14 victory over the Central Valley Cougars earlier this week, on Tuesday. Central Valley, the fifth seed, entered the contest with stronger stats on their season. Looking at their season averages, most would assume the Cougars would have taken an advantage in the game. The Eagles, however, wanted the win more.

Neither team wanted to budge in the first 12 minute of play in the game. While there were some close drives, their defensive lines force their opponents to fourth downs and no score was marked in the first quarter.

Less than 30 seconds into the second, however, the Cougars found an opportunity to break onto the scoreboard with a two-yard touchdown scored by Morgan Bank. The Eagles wouldn’t allow the rushing attempt at the two point conversion, but the Cougars took the lead, 0-6.

Overton’s response to the touchdown was a squall of rushing drives resulting in three touchdowns. First, with 7:41 left in the half, Ryan Lauby carried a one yard touchdown while Ryan Johnson followed with a carry for the conversion to give Overton a two point lead, 8-6. Nearly two and a half minutes later, the Eagles regained possession and sent Elijah Heusinkvelt on a 48 yard run for the end zone giving Overton a one-score lead, 14-6. Johnson attempted a pass to senior Jacob Surridge in the corner of the end zone for the extra two points, but the pass fell incomplete.

Overton wasn’t finished with the scoreboard. Short-time left on the clock in the first half, the Eagles in possession of the ball on their own nine yard line, Johnson handed off the ball to Lauby who seamlessly weaved his way through the Central Valley defense and led them across the field for a 71 yard touchdown, furthering the Eagles’ offensive in the second quarter and driving the score, 20-6, in favor of Overton. The effort was punctuated by a two-point conversion taken in by Johnson to give the Eagles a 22-6 lead with just 45 seconds left in the half.

Central valley, having one more opportunity to respond to the Eagles’ outbreak, closed the half with a turnover.

The game went back to a battle of the defenses when the teams came back from the halftime break.

Central Valley found an opportunity in the fourth quarter to score on the brick wall of Overton’s defense. Just 53 seconds into the final quarter, the Cougars caught a lucky break on a bad snap and took position at the Eagles’ four yard line. On a second and goal, Central Valley junior quarterback Ty Nekoliczak ran the four yards for Central Valley’s final touchdown of the game. Nekoliczak ran in the conversion for an additional two points, bringing the Cougars within one possession of the Eagles, 22-14.

Despite the majority of the fourth quarter ahead of them, the Cougars were unable to make it happen. The Eagles rendered Central Valley hopeless by consuming seven minutes of the game clock on a 14 play drive before the Cougars forced a fourth down. In their return drive, Nekoliczak threw a wayward pass caught by Max Kulhanek, and narrowed any chance of the Cougars recovering a tie game before the end of regulation time.