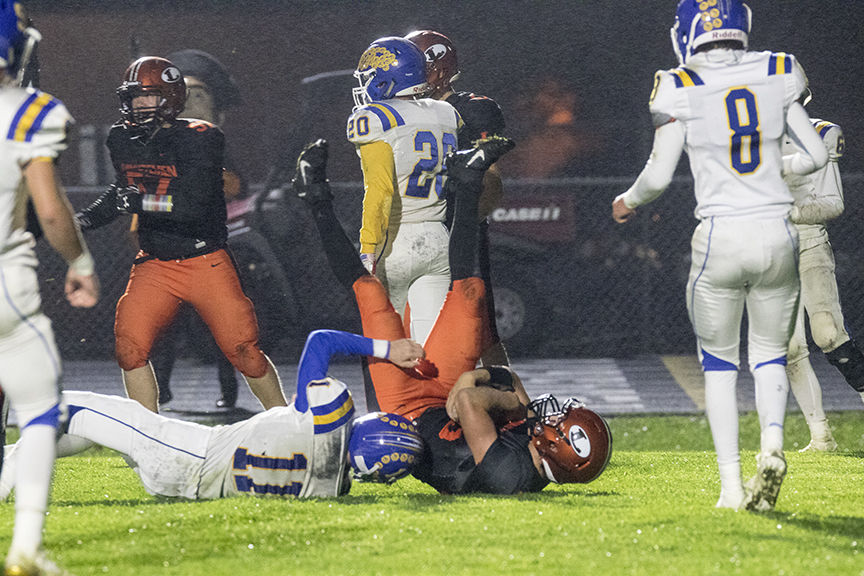 Lexington senior Dakota Haines falls into the end zone, Scoring Lexington’s first touchdown in the second quarter of Friday’s game with the Gering Bulldogs.  The Minutemen took a shutout win on Friday, 21-0. 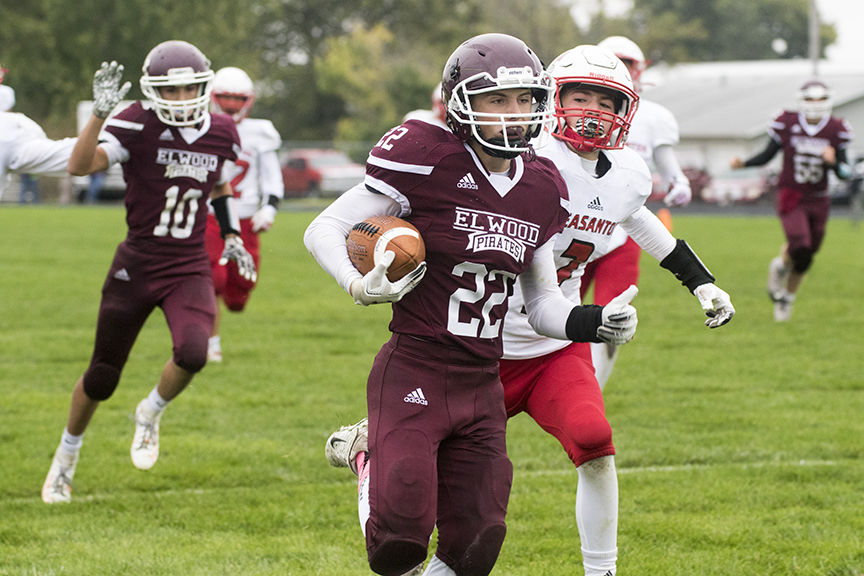 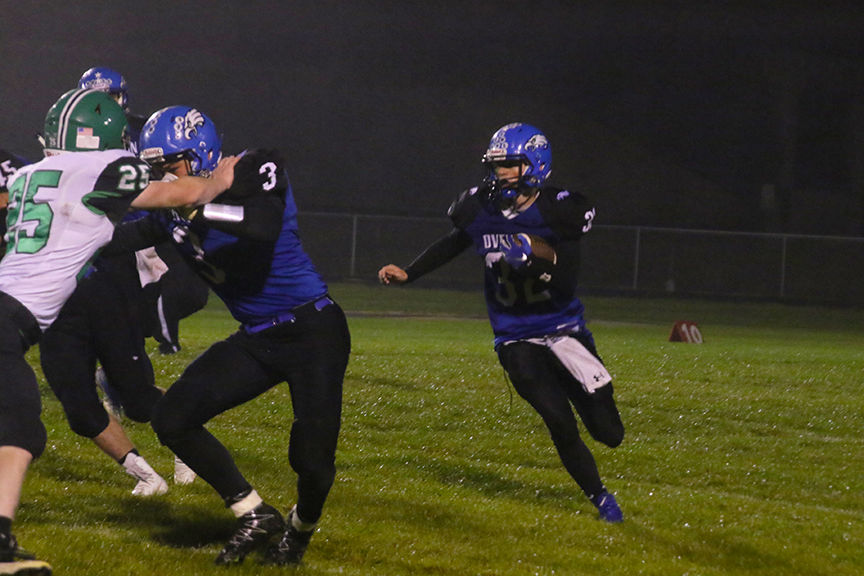 LEXINGTON – Nebraska high school football’s week six netted an overall successful week for area schools as Lexington, Cozad, Elwood and Overton all came away with wins. The Lexington Minutemen put away a strong 21-0 win over the Gering Bulldogs while the Cozad Haymakers put away a 29-6 win over the Minden Whippets. The Elwood Pirates added another win to the column going 14-13 over the Pleasanton Bulldogs and the Overton Eagles put up 58 points over the Loomis Wolves’ 19 in their home game on Friday. The Sumner-Eddyville-Miller Mustangs suffered a loss at the Hands of the Sandhills Valley Mavericks, 28-53.

Mist and rain mixed with cold wind made it feel like football season, weather wise, for the first time this season. Wet grass made for some sloppy fields in the area but that didn’t stop the Minutemen from putting away a shutout 21-0 victory of the Gering Bulldogs.

The first quarter went scoreless in the Friday night game and after trading possessions several times, the Minutemen finally found the end zone late in the second quarter. The Minutemen led with a 7-0 lead going into half-time.

After the half, the orange and black put 14 more points on the scoreboard over the Bulldogs to take a 21-0 lead. The teams went scoreless in the fourth quarter, and the Minutemen put another pin in the win column, 21-0.

Dylan Richman was back in the saddle for the Minutemen, with five completions on six attempts gaining 32 yards. Ean Bailey received two passes for 27 yards and Rafael Sandoval gained 10 yards on one reception.

Despite the slippery surface, the Minutemen made most of their advances on the ground. Lexington gained a total of 202 yards in the game with Gering. Leading the Minutemen in rushing yards was Dakota Haines with 118 yards on 8 carries and two touchdowns. Behind him, Richman gained 49 yards on 10 carries and Alex Ramos gained 37 yards on 14 carries for a touchdown.

With the win, the Minutemen level out their record to three wins and three losses. Their next contest, Friday, Oct. 11, the Minutemen will travel to face the 6-0 Scottsbluff Bearcats. The Bearcats are coming off a shutout of their own, a 59-0 win over the Sidney Red Raiders. The game between the Minutemen and Bearcats is scheduled to begin at 8 p.m.

The Cozad Haymakers will be hosting their game on Friday, Oct. 11 when they welcome the Kearney Catholic Stars. The 5-1 Stars are coming off of a win last week, a 27-14 win over the Sutton Mustangs and will meet with the 4-2 Haymakers after a 29-6 win over the Minden Whippets. Kickoff at Haymaker Stadium is set for 7 p.m.

The 4-1 Elwood Pirates will be traveling to Bertrand this week to battle with the 2-3 Vikings. The Pirates edged a 14-13 win over the Pleasanton Bulldogs as a precursor to this week’s game, while Bertrand is coming off of a loss to Anselmo-Merna, 78-12.

The 3-2 Overton Eagles will meet with the 2-3 Anselmo-Merna Coyotes in Merna on Friday. Kickoff for the Eagles and the Coyotes is set early, at 3 p.m. The S-E-M Mustangs (2-5) will be at home in the afternoon when they host the 3-2 Maywood/Hayes Center Wolves on Friday. The Game in Sumner is set to begin at 3:30 p.m.

EUSTIS – The Hi-Line Bulls were at home in Eustis on Friday, Sept. 18 when they hosted the Maxwell Wildcats.  The Bulls went to putting the hu…

LEXINGTON – The Lexington Minutemen suffered a tough loss in a surprise game with the Central City Bison on Friday, Sept. 18.  The Lexington b…

CENTRAL CITY – The Minutemaids had another successful day, this time at a tournament in Central City where the Minutemaids went 1-1 and took h…

Three more wins for the Eagles

OVERTON – The Overton Eagles chalked three more wins to their season after a 3-0 win over Maxwell on Tuesday, Sept. 15 and two more wins at a …

COZAD – The Cozad Haymakers suffered their first loss of the season at the hands of the Adams Central Patriots on Friday, Sept. 18.  The Patri…

LEXINGTON – The Lexington Minutemaids volleyball squad hosted the Broken Bow Indians for a best of five match on Thursday, Sept. 17. The Minut…

LOOMIS – The Overton Eagles continue their struggle in the 2020 season.  The young Overton players gained more experience in the varsity arena…

Lexington senior Dakota Haines falls into the end zone, Scoring Lexington’s first touchdown in the second quarter of Friday’s game with the Gering Bulldogs.  The Minutemen took a shutout win on Friday, 21-0.