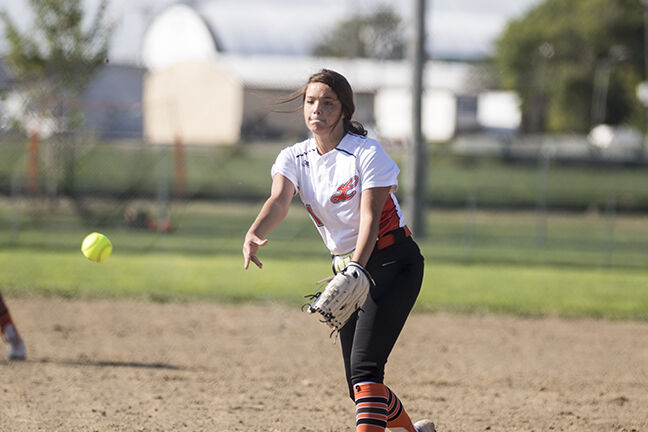 Lexington pitcher Amaya Stewart throws a pitch in the first game of the day at the Cozad Softball Invite on Saturday, Sept. 12.  The Minutemaids won their first game, 18-12, defeating the St. Paul Wildcats. 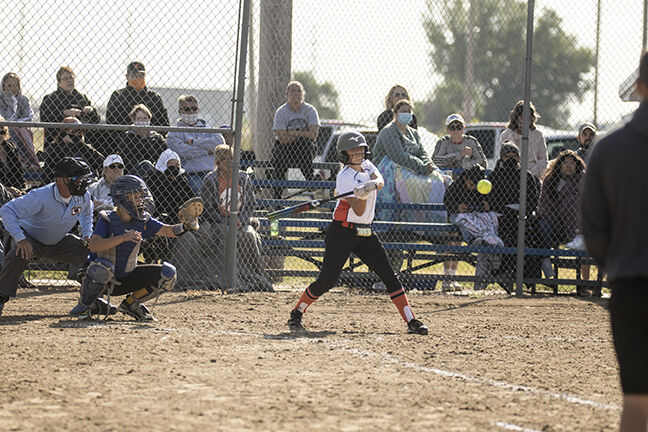 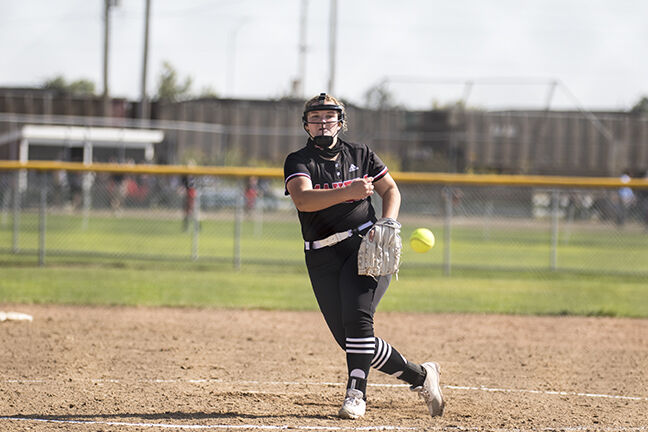 COZAD – The Cozad Haymakers softball team hosted their home invitational on Saturday, Sept. 12. The Lexington Minutemaids, as well as the Cozad lady Haymakers, earned two wins and one loss on the day.

The Minutemaids started off their day on the East field against the St. Paul Wildcats in a high-scoring affair. The Minutemaids pushed ahead and held the lead to an 18-12 win over the Wildcats.

The Minutemaids’ success rode on their home run power earlier in the week. Well placed and consistent hits were the key to their success against the Wildcats on Saturday, recording 15 hits on 31 at-bats with just one home run hit by Jordyn Jeffries.

Lexington head coach Katie Ruwe had mentioned in an earlier interview that the ‘Maids needed to try a new strategy that didn’t rely on home runs for wins.

“At practice we worked solely on defense but we talked about how we need to string hits together,” Coach Ruwe said of their strategy for their first win of the day. “We even bunted to get on base, made those adjustments and made them in the moment. We did have one home run, but definitely not as many as usual.”

The Minutemaids recorded 17 RBIs in the game with St. Paul.

The Cozad lady Haymakers opened their day against the Fillmore Central/Exeter-Milligan/Friend (FCEMF) Panthers. They took an early 4-2 lead, at the end of the first inning, before a big 10-run push in the bottom of the third inning to take a 14-2 win.

Cozad earned 13 hits on 21 at-bats for 14 runs against the Panthers.

The two wins brought the Minutemaids and the lady Haymakers together for their next game.

Cozad scored three runs in the first inning to take a small lead while the Minutemaids held position close behind, 2-3, before tying it up in the bottom of the third.

A six run rally in the top of the fifth inning gave Cozad a large lead, 3-9, and the ‘Maids were only able to answer with two runs. Cozad extended their lead by another six runs in the top of the sixth inning to take a win, 6-15.

The Minutemaids rested at 1-1 for the day while the lady Haymakers looked to their game with a 2-0 record for the day.

Lexington went on to play the Southern Valley/Alma Saints for their final game of the day. An eight-run rally in the top of the fourth inning propelled the Minutemaids to a 12-4 lead on the Saints. Southern Valley/Alma edged the ‘Maids in the fifth inning, 3-4, but Lexington claimed the win, 15-8, ending their day with two wins and one loss.

Cozad finished their day in a game with the Kearney Catholic Stars. Cozad scored the first run of the game but the Stars took command of the field scoring nine runs in the five inning game. The Haymakers fell to the Stars, 1-9, and went 2-1 on the day.

Cozad will be back in action on Thursday, Sept. 17 when they travel to Grand Island to play the Northwest Vikings. Game time for the lady Haymakers at Northwest is set for 6:30 p.m.

Lexington Softball will also be on the road for their next game when they travel to North Platte. The ‘Maids will play in the North Platte tournament on Saturday, Sept. 19 with games starting at 12 p.m.

LEXINGTON – Area Football teams were largely away in Friday’s games with the Sumner-Eddyville-Miller Mustangs the only teams to play at home. …

LEXINGTON – The 2020 Fort Kearny Conference Volleyball Tournament is underway and will complete on Thursday, Oct. 15. Kicking off in two locat…

CRETE – The Minutemaids volleyball team were on the road last week as they competed in the Central Conference tournament. The Lexington squad …

LINCOLN – The Lexington Minutemen tennis boys traveled to Lincoln for the NSAA State Tennis Championships at the end of last week. The Minutem…

HASTINGS – The Lexington Minutemaids traveled to Hastings for the Class B-9 District Softball Tournament at the Smith Softball Complex. In day…

HASTINGS – The Lexington Minutemaids took the Class B-9 district tournament the distance, forcing the Adams Central Patriots to a second champ…

Lexington pitcher Amaya Stewart throws a pitch in the first game of the day at the Cozad Softball Invite on Saturday, Sept. 12.  The Minutemaids won their first game, 18-12, defeating the St. Paul Wildcats.