The offices of Jacobson Plumbing, Heating and Repair and the REO Agency at the Delp-Chandler location on West 5th St. The rear of the old Lexington State Bank can be seen to the left. Picture taken in 1920.

The office interior of the United Electric Company in Lexington, the picture was taken during July, 1923. 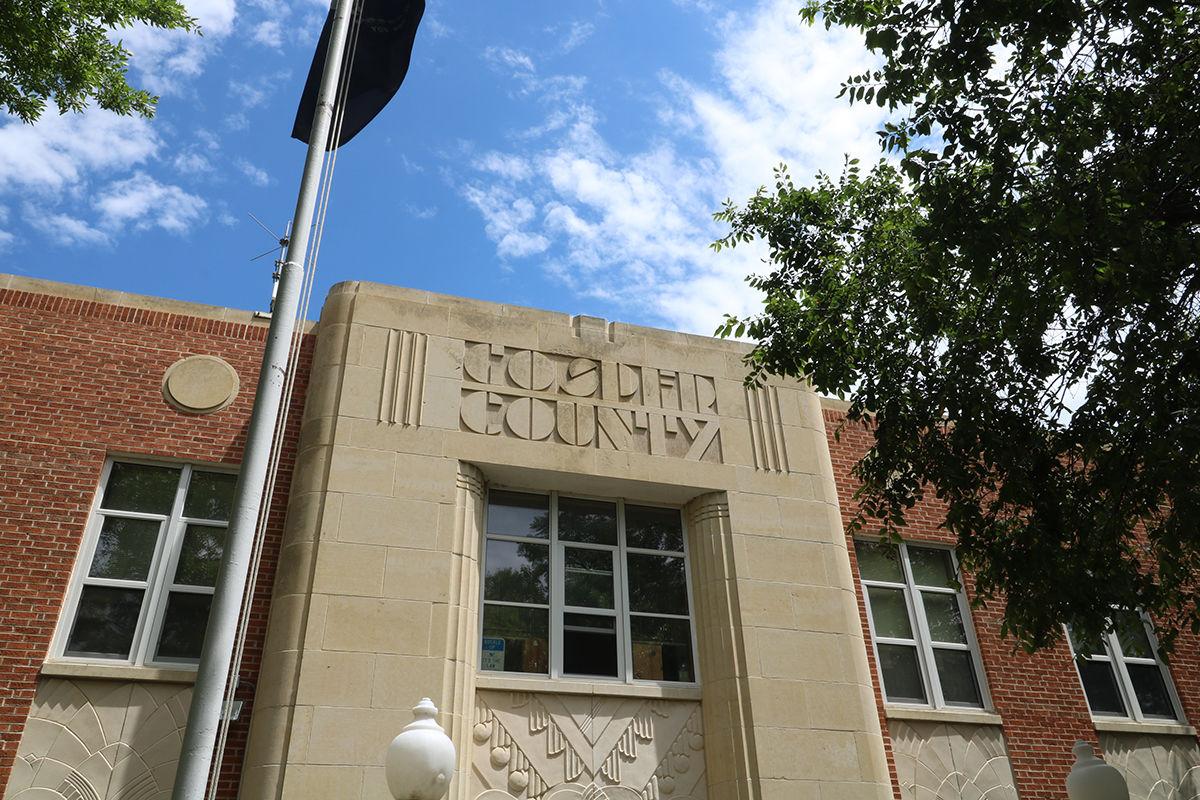 The Gosper County Courthouse is on the National Historic Registry due to the Art Deco style of it’s construction, a style which was popular in the 1920s.

The offices of Jacobson Plumbing, Heating and Repair and the REO Agency at the Delp-Chandler location on West 5th St. The rear of the old Lexington State Bank can be seen to the left. Picture taken in 1920.

The office interior of the United Electric Company in Lexington, the picture was taken during July, 1923.

The Gosper County Courthouse is on the National Historic Registry due to the Art Deco style of it’s construction, a style which was popular in the 1920s.

LEXINGTON — With New Year’s Day on Wednesday a new decade has been ushered in, the calendar officially turning over to 2020. At times like this it is prudent to look back at history and see how things have changed…or the ways they haven’t.

As Mark Twain is reported to have said, “History doesn’t repeat, but it does rhyme.”

One hundred years ago, the world entered the 1920s with several events, movements and trends marking the era.

By 1920 the population of Lexington had grown to 2,327 and construction in the business district moved expanded east and west along the Lincoln Highway, away from the railroad depot area. By the end of the 20s the population had grown to 3,150, according to the book Plum Creek to Lexington, published by the Dawson County Historical Society.

The city government also changed during the 1920s. The position of city engineer became an elected one and remained so until 1922. Also in 1922, the mayor, clerk and treasurer were elected to two year terms. Interestingly, no police judge was elected from the start of the period until 1925.

The morals of the time can be detected in this city ordinance from July 1921, it made it unlawful for “men or boys of any age, within the city limits; to approach any woman or girl, with whom they are not acquainted, and invite, solicit, or request them to accompany said men or boys to go automobile riding, walking or places of amusement.”

It was also during this time the city increased the speed limit in town to 15 mph.

Public spaces were not neglected during this time period, in 1924 a municipal swimming pool was built by the city on East Pacific St. The 30 by 60 foot pool cost $3,000 at the time. Water was supplied by the Lexington Mill and Elevator Company. The pool was two to eight and a half foot deep and quickly became popular.

It was also during the 1920s Lexington High School, now the Lexington Middle School was built. Construction was completed in 1927. The school was built in response to a petition signed by 728 voters who requested the district construct an addition to the existing high school.

High school pranks have not changed much since the 20s. The local paper reported someone smeared Limburger cheese on the highs school radiators and on the engine of Superintendent Adams’ car. Someone also emptied the contents of ink bottles down the tubular fire escape.

Ever wonder when Lexington decided its mascot should be the minuteman? It happened in 1923.

According to a 1926 yearbook, “On investigation we find after the Callaway football game in 1923, while the team was returning home late at night, it was suggested by Prof. Collett that since Lexington, Massachusetts was one of the historic spots where the minuteman made themselves famous, we might give our athletes the same title…the minuteman of revolutionary fame was a real fighter.”

Lexington’s band program is well known today, but in the 1920s, there was no high school band. The city council actually employed a bandmaster to instruct an adult and juvenile band. In 1923 the bandmaster was M.O. Bates, a city attorney, and he was paid $75 a month.

Unfortunately, the prosperity of the 1920s also gave new energy to prejudice. A Ku Klux Klan group formed in Lexington for a period in the late 20s. On Aug. 24, 1926 there was a parade of around 25 Klansman down the city streets; around 1,000 people watched the event.

During the 1920s Lexington was served by the Clipper Citizen and the Dawson County Herald.

In general the 1920s have been referred to as the, “Roaring Twenties,” especially in the United States. This period was a one of economic prosperity following the First World War.

The U.S. had been spared from most of the damage of the war, entering late in 1917. Before that the economic center which had been in London, began to shift to New York as the British took out millions in loans to support the war effort, the United States did not turn down the cash.

The violence of World War I had a shattering effect on the peoples of the world, especially in Europe. In fact the 1920s in Europe has been called, “The Age of Anxiety.”

The era was also defined by vigorous activity in social, artistic and cultural sectors.

In music, jazz emerged as a popular form. Drawing from African and European music and centered in New Orleans, the music gained popularity in part due to the introduction of radios. The form was also readily embraced by young people of the era.

In fashion, the flapper look was a radical change for the Western woman and was a full break from old Victorian roles and morals. Older generations accused flappers of being “near nakedness,” for wearing skirts cut at the knee.

Outside of dress, the flapper style also rebelled against old moral traditions for women. Those who participated in the style were seen as brash for wearing excessive make up, drinking alcohol, smoking, driving cars and flaunting sexual norms of the times.

Interestingly, the flapper style did not often cross path with suffragettes, who were fighting at the time for women’s right to vote. In fact many older suffragettes viewed flappers as vapid and possibly unworthy of enfranchisement.

On this note, it was Aug. 26, 1920 in which the 19th Amendment was officially past. It read, “The right of citizens of the United States to vote shall not be denied or abridged by the United States or by any State on account of sex.”

The fight for women’s right to vote had gathered strength in the 1840s among a broader push for more women’s rights. Famed women such as Susan B. Anthony and Elizabeth Stanton led the charge for women’s suffrage during this period.

Again, World War I played a major role in shifting opinion in suffragettes favor. As men left for the war effort, women took their places in every day jobs and stepped into those positions which they had never held before. The war gave women agency they had never had previously.

After a hard fought vote in Congress, Tennessee became the last of 36 states necessary to secure ratification of the amendment. The passage of the 19th Amendment enfranchised 26 million American women in time for the 1920 election.

In art and architecture, the Art Deco styled reached its peak. To be briefly summed up, Art Deco can be defined as the desire to be modern.

It utilized new and different styles with new materials such as chrome plating, stainless steel and plastic. Art Deco influenced designs of everything from skyscrapers, buildings, furniture, fashion, cars, theaters and everyday objects like radios or vacuum cleaners.

The Chrysler Building and Empire State Building in New York might be the most recognizable products of the Art Deco style.

Closer to home, the Gosper County Courthouse is on the National Register of Historic Places due to its architectural style which includes Art Deco aspects. The building was constructed in 1939 and reflects a more modest approach to Art Deco due to the Great Depression, but is historically significant all the same. It was listed on the registry in 1990.

The 1920s also saw the rise of a trend people today would be intimately familiar with, consumerism.

The introduction of mass production, new markets and new innovations saw a burst in personal prosperity and a higher quality of life. Americans began to buy products in every increasing numbers, with purchases on credit seeing with spread growth.

In fact, 80 percent of Americans during this time had little to no savings. The prosperity and the economy seemed stable on the surface, but it hid the fact many Americans were in debt.

“We are urged on the highest authority to spend rather than to save. This strange doctrine would have horrified our grandfathers,” said Stuart Chase in 1929.

Increased consumerism such as this was one of the factors which led to the stock market crash of 1929 and the Great Depression.

In short the 1920s were marked by a feeling of novelty which had its roots in modernity and a break from tradition. New technologies such as the cars, movies, radios were brought to the larger population. Old frills were dropped in favor of practicality. To many it seemed like anything was possible in this era.

Yet it is important to remember how the 1920s ended, with the worst economic depression the United States has historically seen. Faith in the economy and the market was unshakable until the crash of 1929.

To survive, Americans had to change their habits, adapt their lifestyles and reevaluate their values.

As 2020 arrives and a new decade, it is worth remembering Twain’s quote and learning from what the past has to teach everyone.