KENOSHA, Wis. — When he was acquitted of murder in shootings during unrest in Kenosha, Kyle Rittenhouse went from staring at possible life behind bars to red-hot star of the right: an exclusive interview with Tucker Carlson and a visit with Donald Trump at Mar-a-Lago capped by a photo of both men smiling and snapping a thumbs-up.

For Rittenhouse, a year of legal uncertainty over whether his claim of self-defense would stand up has given way to uncertainty over what's next. He told Carlson, in an appearance that spiked the host's ratings by some 40%, that he hoped to become a nurse or maybe even a lawyer. He planned to "lay low" but would for sure leave the Midwest.

Even as Rittenhouse figures out his next moves, fundraising continues on his behalf, ostensibly to retire legal bills from his trial but perhaps in recognition that he may face civil lawsuits over the shootings. Rittenhouse has hinted he may bring defamation claims of his own, and could seek possession of $2 million in bail money raised by his supporters.

And some marketing experts say Rittenhouse — at least for a short while — may be able to leverage his story into lucrative paid appearances and even a book.

"I wouldn't go near it on a number of levels," Ric Bachrach, CEO of branding and marketing company Celebrity Focus, said. "But somebody out there is going to want to tell his story."

"He could easily secure a seven-figure book contract," said Andrew M. Stroth, a former talent agent and an attorney in Chicago with no ties to Rittenhouse. Rittenhouse, he said, "could monetize his brand and potentially make in the millions."

Rittenhouse could get the $2 million that was raised for his bail, though there is a legal battle for it. In Kenosha County, where he was tried, if a defendant is acquitted, the entire bail amount is typically refunded to whomever posted it, upon a judge's order. The poster of the bail is not necessarily the defendant, said Rebecca Matoska-Mentink, the clerk of courts for Kenosha County.

Rittenhouse's bail was posted by his former attorney, John Pierce, who said he has relinquished claim to the money. Mark Richards, Rittenhouse's current attorney, said in a Friday filing it should go to his client. Fightback Foundation, the organization that raised the funds and transferred them to Pierce so bail could be paid, argues that the money should be refunded to the organization.

Other fundraising opportunities have opened up.

After his acquittal, GoFundMe lifted a ban on Rittenhouse fundraisers that had been in place as part of a policy blocking fundraising for the legal defense of someone accused of a violent crime. There didn't appear to be any new fundraising efforts for Rittenhouse on the GoFundMe website.

But there are at least three efforts to raise money for Rittenhouse or his family on GiveSendGo, one of which has raised more than $625,000 — including thousands since his acquittal. It's not clear how much an additional website, freekyleusa.org, has raised.

One email Tuesday from "Free Kyle USA," sent under the name of Rittenhouse's mother, Wendy, called his acquittal "a victory for the truth, for justice, and for every American's God-given and unalienable right of self-defense." It said funds would go toward case-related debts, legal bills and then toward a scholarship fund for Rittenhouse so he can graduate from college without debt.

He may not have to wait around for donations. Stroth estimated Rittenhouse could command a speaker's fee on the lecture circuit of anywhere between $2,500 and $25,000 a speech.

Both Stroth and Bachrach said they would never seek to represent Rittenhouse, and that many speakers' agents and publishers would consider him too toxic. But some who cater to conservatives could jump at the chance to sign him.

Former Illinois Gov. Rod Blagojevich, who was released from prison last year after then-President Donald Trump commuted his sentence, told reporters in August that money he earns sending personalized greetings via the Cameo app is "surprisingly lucrative." A personal video greeting from Blagojevich costs $100 and messages for business use are $500.

Blagojevich also started a podcast, another possible option for Rittenhouse.

There's also merchandise. "Free Kyle" T-shirts and other items that were sold online after the shootings were eventually dropped by the vendor after prosecutors criticized the sales. Acquittal might re-open that market.

In his interview with Fox News, Rittenhouse hinted that he was looking into possible libel lawsuits. "I feel like my life has been extremely defamed," he said, adding: "I have really good lawyers who are taking care of that right now."

It's not at all clear whether Rittenhouse has a strong libel case. The threshold for proving libel is far higher for figures in the public eye and those charged with crimes, even if they were later acquitted.

And Rittenhouse could be open to some civil liability of his own.

The man who was shot and wounded by Rittenhouse and the family of one of the two men killed are suing Kenosha officials. Neither lawsuit names Rittenhouse as a defendant, and it wasn't immediately clear if claims would be filed against him. The standard of proof is lower in civil trials than in criminal ones.

As Rittenhouse weighs his next moves, many conservatives are rushing to tie themselves to him as a symbol of the vindicated right to self-defense.

Besides Carlson's exclusive interview, the host has a documentary on Rittenhouse upcoming in December, with footage from an embedded camera crew. Trump talked up Rittenhouse's visit to Mar-a-Lago on Sean Hannity's show, complete with photo.

Some of the most conservative members of Congress — Reps. Madison Cawthorn, Paul Gosar and Matt Gaetz — took to social media to dangle internship offers for Rittenhouse, though it's not clear whether they were serious or if Rittenhouse even has an interest in such work. Rep. Marjorie Taylor Greene introduced a bill to award him the Congressional Medal of Honor.

Rittenhouse himself may need to move fast for the most gain from his story, Bachrach said.

Of Rittenhouse's fame, he said: "I think it has a shelf life, but I don't think it will ever go away."

5 dead, 40-plus injured after SUV plows into Christmas parade in Wisconsin

An SUV sped through barricades and into a Christmas parade in Waukesha on Sunday, killing at least five people and injuring more than 40 others in a horrifying scene captured by the city’s livestream and the cellphones of onlookers.

Eighteen of the more than 40 people injured by an SUV that plowed through a Christmas parade in Waukesha, Wisconsin, on Sunday were children ages 3-16, officials said.

Prosecutors say a sixth person, a child, has died after an SUV was driven into a Wisconsin Christmas parade.

Waukesha, Wisconsin, Police Chief Dan Thompson with the latest from the investigation into the incident in which a driver plowed through the city's Christmas parade.

'Mama, are you OK?' In Waukesha, minutes of terror recounted

The joyous, mingled bedlam of the parade — the drums of different bands, the cheers of the crowd, the recorded music for various dance groups — seemed to just stop.

"I'm not a racist person. I support the BLM movement, I support peacefully demonstrating," Kyle Rittenhouse tells Tucker Carlson in excerpts of the interview released by Fox News.

A difficult political atmosphere for President Joe Biden may have become even more treacherous with the acquittal of Kyle Rittenhouse.

Mark McCloskey compared himself to Rittenhouse in a statement, saying they both were defending themselves from an "angry mob." The story is trending in the wake of the Rittenhouse verdict.

"To see what happened so close to our home, where it's supposed to be safe, it's heartbreaking."

In this image from video, Kyle Rittenhouse, right, sits for an interview with Fox News host Tucker Carlson. 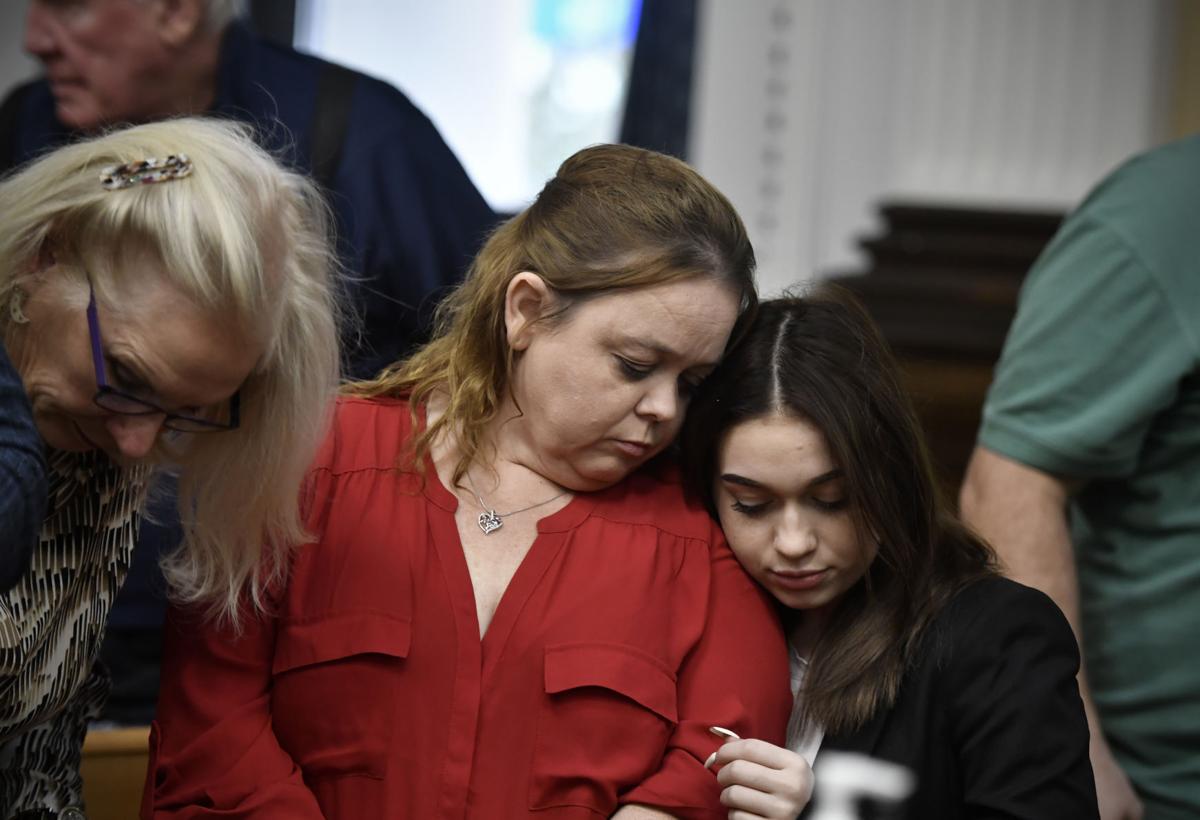 Kyle Rittenhouse's mother, Wendy, center left, and his sister, McKenzie, right, embrace as the judge lets the court out for a lunch break during the trial Thursday, Nov. 4, at the Kenosha County Courthouse.