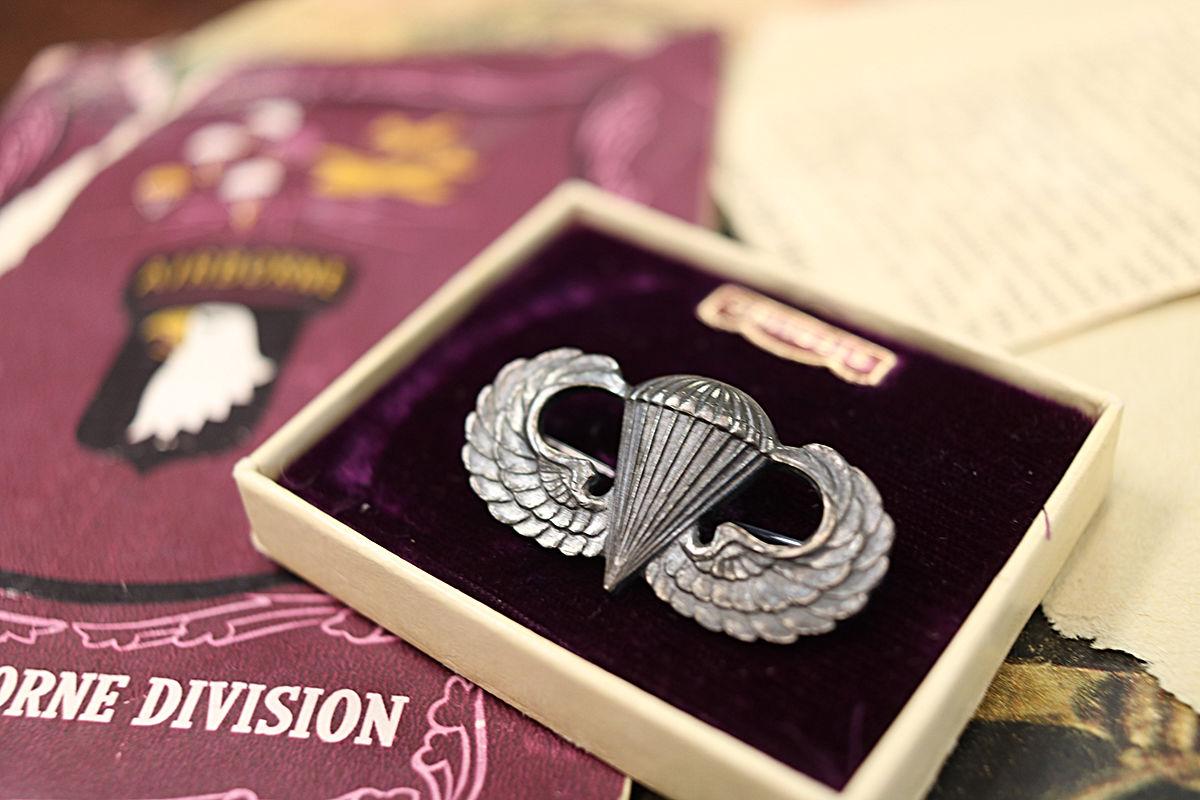 Milo Koehn’s jump wings he earned after successfully completing paratrooper training. The airborne was seen as an elite force in the U.S. Army, earning these wings indicated a solider was a part of this force. 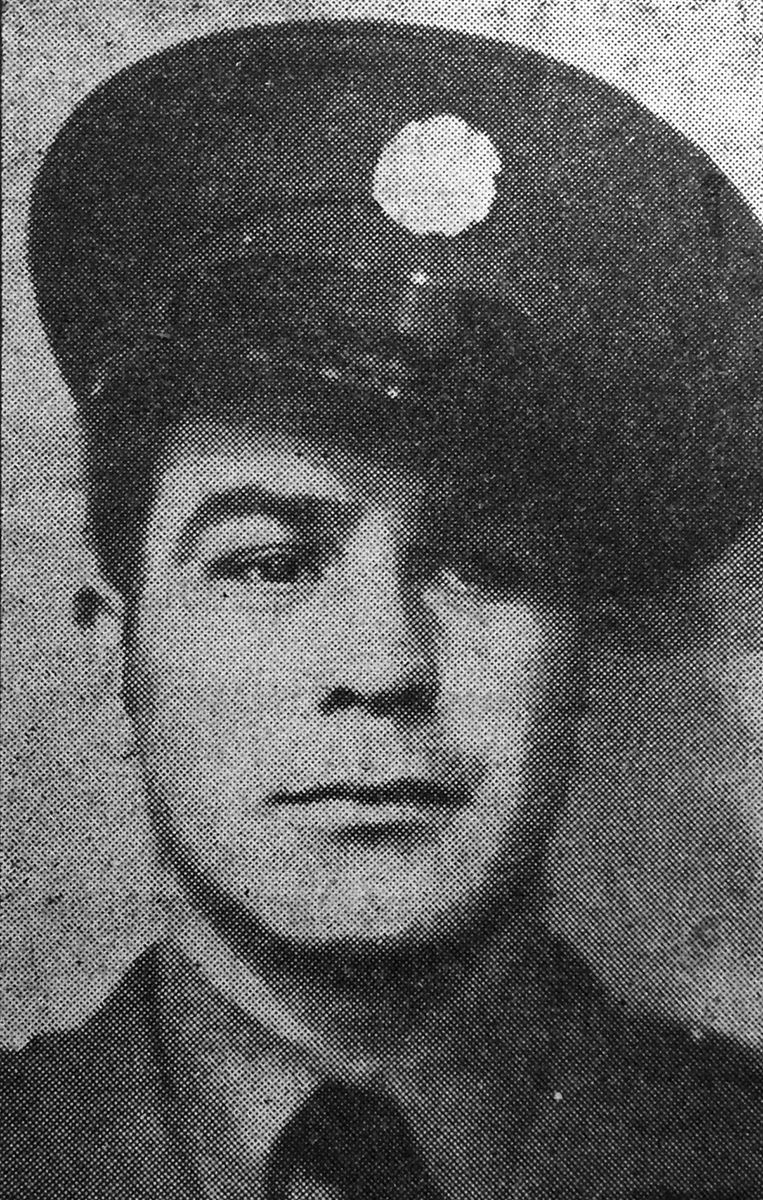 Editor’s Note: This is the first of a three part series about the battles Lexington native Milo Koehn fought in while he was a member of the 101st Airborne Division during the Second World War.

LEXINGTON — From the skies of Normandy, to the dams of Holland, in the freezing forests of the Ardennes, one Lexington native fought his way across a continent during the Second World War with one of the most famous Army groups, the 101st Airborne, the "Screaming Eagles."

Milo Koehn enlisted into the United States Army on March, 12, 1942, his brother, Ivan Koehn also enlisted in the army and joined the 82nd "All American," Airborne Division. Perhaps it was this familial tie which prompted Koehn to become a paratrooper himself in the 101st Airborne.The concept of U.S. Army paratroopers was a radical new idea at the time and those who "earned their wings," were seen as elite, the best of the best.

"It doesn’t make much sense now, but at the time we were ready to trade our lives in order to wear the accoutrements of the Airborne," a paratrooper was quoted as saying in Stephen Ambrose’s book, "Band of Brothers."

Aeota, "Doll," Nielsen, Koehn’s wife, still has Koehn’s silver jump wings he was able to pin to his left jacket pocket to indicate he had made it through the rigorous jump school which all paratroopers had to pass through. Many did not pass the training and washed out, banished to the realm of regular infantry.

Koehn would eventually become a member of Regimental Headquarters Company, 506th Parachute Infantry Regiment, later to be incorporated into the 101st Airborne Division. Koehn initially was a truck driver, but switched to the role of rifleman.

After airborne training in the states they arrived in England in the fall of 1943, Koehn and the 506th were here to prepare for the invasion of France. D-Day, as it would come to be called, was scheduled for 1944.

The 101st Airborne would be some of the first units on the ground in Normandy, part of the first airborne wave. According to Ambrose, the units were given, "the task of establishing a beachhead on each side of the Douve River, where the French coast makes a right angle."

The 506th would be securing four causeways behind Utah beach, the left flank of the D-Day invasion. The Americans would be assaulting with the 4th and 90th Infantry Divisions.

Koehn and his comrades would be taking off from RAF Upottery, transported by the 439th TCG in 45 C-47’s. They would be landing in a site designated Drop Zone C, one mile west of the town of Sainte Marie-du-Mont.

Due to poor weather, the D-Day invasion, originally scheduled for June 5, 1944, was postponed until the next day.

Just before leaving for the D-Day marshalling areas, a roster was taken of the Regimental HQ Company, of which Koehn was a part, this also included his commander, Colonel Robert Sink.

As the C-47’s lumbered into the air over southeast England, they stayed low, trying to avoid the German radar. The second wave of planes delivering the 506th to the drop zone faced difficulties including being disorganized by low clouds and being in the sights of German anti-aircraft guns from 10 miles.

Despite these challenges, the planes carrying the Regimental HQ, which Koehn was a part of, were able to deliver most of the men accurately within a mile of the drop zone, fairly accurate considering some units were dropped 20 miles off course. The men jumped from the planes around 1:14 a.m. in the morning on June 6.

While the drop was coordinated, there were other problems. Unknown to intelligence, the area was occupied in force by the Germans and a battery of 105mm guns, whose job it was to shell American landing forces at Utah Beach.

Koehn must have been like his comrades who found movement in this field slow and hazardous, many took cover in drainage ditches and indentations. Koehn’s captain, Edward Peters, was killed on D-Day.

Even by daylight, assembly of the men was still hampered by the man high hedgerows which made up the Normandy countryside. These man high hedges have been grown by the Norman farmers for centuries. They help to separate tracts of land… and created a paradise for the German defenders, the landscaping acting like a funnel toward their guns.

By the morning of June 7 around 50 men from Headquarters Company had assembled and were going to attack through the village of Vierville toward St. Come du Mont. During the attack Koehn’s company lost five men to mortar fire. Lt. Colonel Charles Chase, the Regimental Executive Officer of Koehn’s company called the Germans’ movements, "A high powered-delaying action."

As Koehn’s battalion moved, they were constantly harassed by German sniper fire, the commander of the 1st Battalion, Lt. Col. William Turner was killed.

On June 8, the whole 506th company was involved in fighting around St. Come du Mont, the result was the Germans pulling back toward the town of Carentan. German Field Marshal Erwin Rommel ordered the German commander to, "defend Carentan to the last man."

The higher ups were afraid this move would block the merging of the two American beachheads, Omaha and Utah and ordered the 101st Division to drive the Germans out.

The attack started on June 10, Koehn’s company went in with the rest of the 506th, deployed across the Carentan highway. The fighting was fierce in the town as the Germans defended with machine guns, mortars and artillery. The Americans wouldn’t capture the area until June 12.

The German Wehrmacht were experts at coordinated counterattacks, they were not going to just let these American paratroopers rest on their laurels. On June 13 two battalions of the 37th SS Panzergrenadier Regiment, supported by the 17th SS Panzer Division, attacked with tanks and self-propelled guns.

The Americans, including Koehn had taken position outside the town, but the companies on the left flank were driven back by the tank attacks. Elements on the right flank were able to hold their position and slowed the German attack until the U.S. 2nd Armored Division, with Sherman tanks, were able to enter the fight. This drove the Germans off and the Americans held Carentan.

After these actions the 506th was given to mainly defensive action for the remainder of their service in Normandy. The whole 101st Division was pulled from the front lines by June 30 and transported back to England for rest, refits and reinforcements to replace those lost in action or wounded.

Koehn’s next airborne drop would come again in September 1944 and it would be the largest airborne operation in military history.

And it would fail.