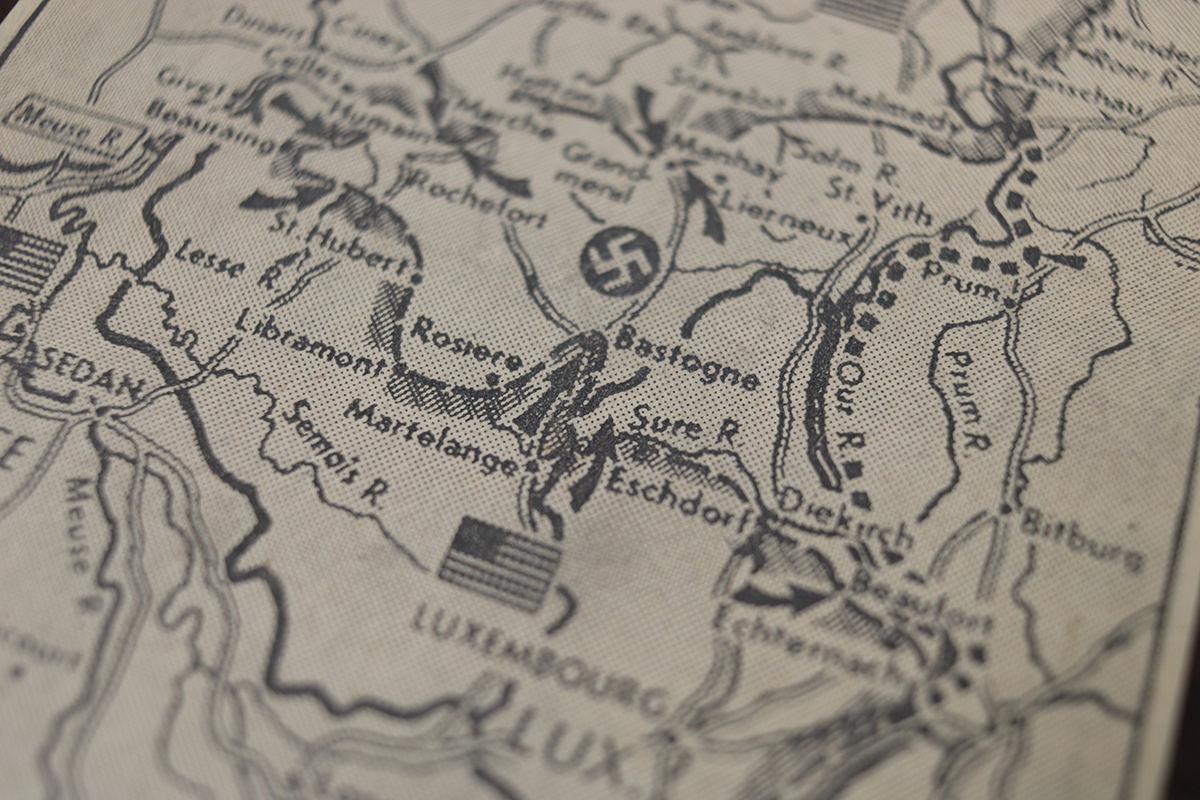 A wartime newspaper clipping showing the German advance into Belgium and the town of Bastogne where the 101st held out, surrounded, against numerically superior German forces. 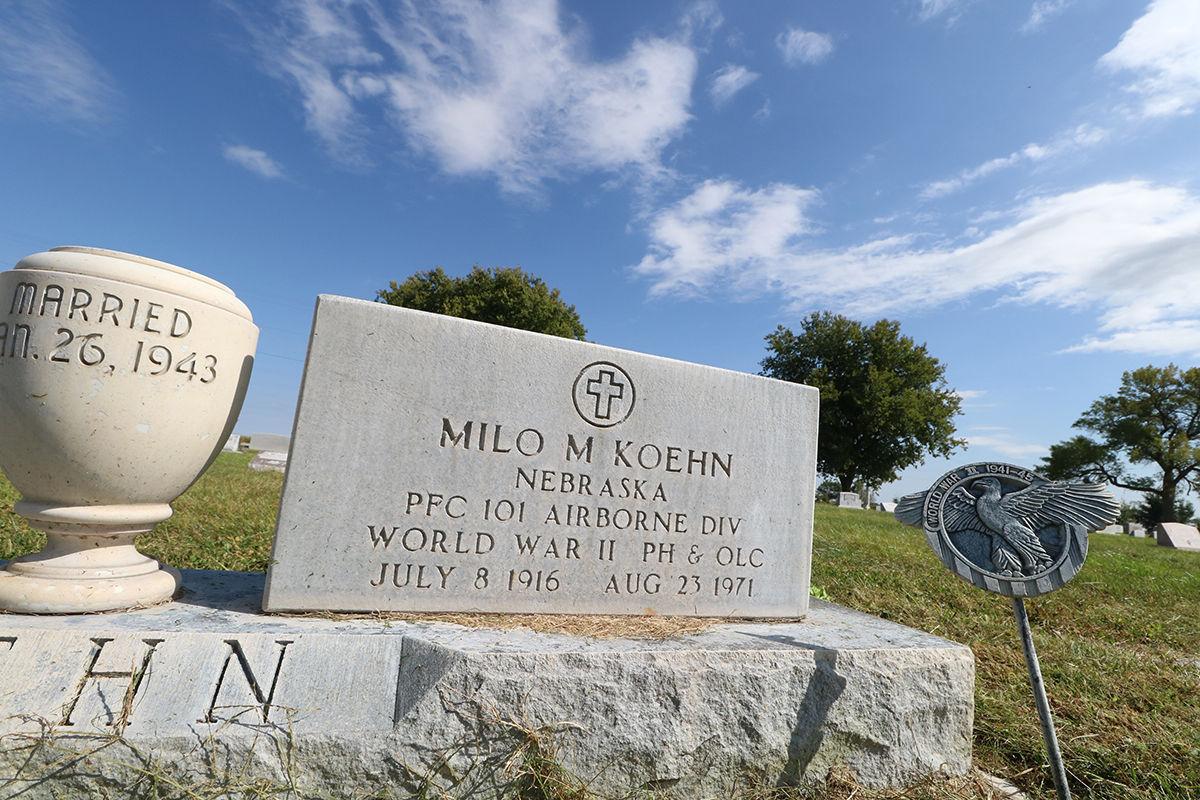 Milo Koehn’s resting place in Greenwood Cemetery, he was buried with full military rites as a member of the 101st Airborne Division and a veteran of the Western Front during the Second World War. 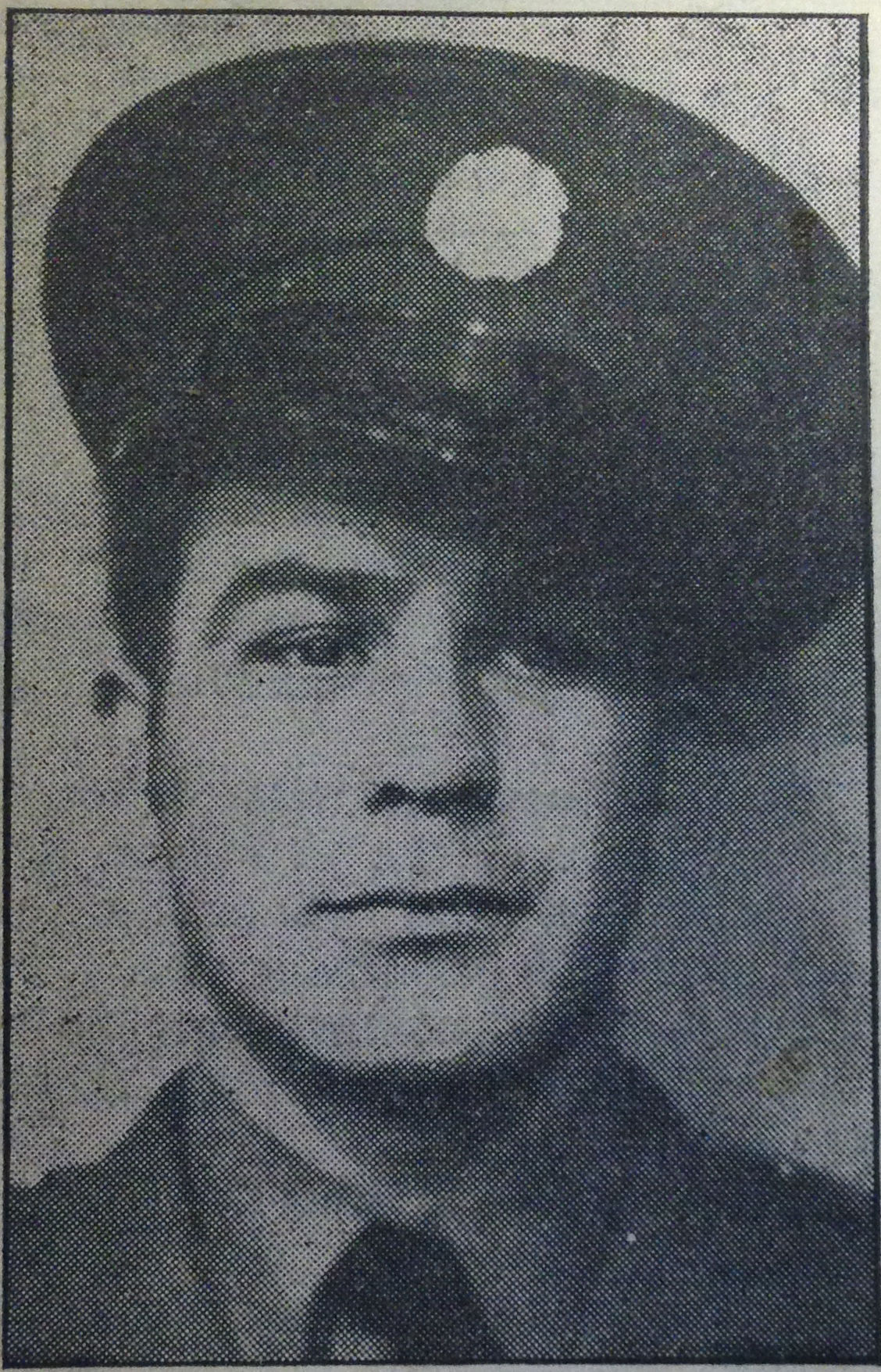 A wartime newspaper clipping showing the German advance into Belgium and the town of Bastogne where the 101st held out, surrounded, against numerically superior German forces.

Milo Koehn’s resting place in Greenwood Cemetery, he was buried with full military rites as a member of the 101st Airborne Division and a veteran of the Western Front during the Second World War.

Editor’s Note: This is the final of a three part series about the battles Lexington native Milo Koehn fought in while he was a member of the 101st Airborne Division during the Second World War.

On Dec. 16, 1944, Hitler launched his last offensive in the West. The result was the largest single battle on the Western Front in World War II and the largest single engagement by the U.S. Army, according to author Stephen Ambrose. It would become known as the Battle of the Bulge.

The attack had achieved complete surprise for several different reasons. For one, the German attack had the overly ambitious goal of pushing all the way through Belgium, to the Atlantic, the only way it could be sustained if the Germans captured major supply dumps.

Third, the Germans expertly concealed their troop movements. Whole divisions were disappearing and Allied intelligence had no idea where to find them. This stands in stark contrast to the Normandy invasion when the Allies nearly had the German order of battle perfect down to a man.

Fourth, the Germans launched their attack in a place the Allies should have known to expect a counter attack, the Ardennes Forest. In 1940 the Germans had flanked the formidable defenses of the French Maginot Line through the Ardennes, a place where the French planners thought no mechanized army could pass. The Germans repeated the tactic in 1944.

The weather also played a major factor, Dec. 16 was cold and foggy and it grounded Allied air power, their trump card against the Germans.

The attack led General George Patton to comment, “We can still lose this war.”

Koehn, the 506th and the whole 101st Airborne would be drawn into what would be known as the Battle of the Bulge. Eisenhower, looking at the situation of a German breakthrough across the Belgium line, had no strategic reserves to bring into play. He did have the 101st and 82nd Airborne resting and refitting, they would be used to plug the holes in the Allied line and hold onto the strategically important city of Bastogne.

Koehn and his comrades did not know where they were going when they broke camp, they didn’t have enough ammunition, only what they had brought out of Holland, they did not have any winter gear. “They were under strength, inadequately clothed and insufficiently armed,” Ambrose wrote.

The 506th was loaded up on trucks and driven into Belgium toward Bastogne. Along the way the men ran into the remnants of the retreating American troops who had been in the first to face the German offensive.

“Run! Run! They’ll murder you! They’ll kill you! They’ve got everything, tanks, machine-guns, airpower, everything,” one terrified soldier said to the 101st, Ambrose wrote.

The 506th helped themselves to the retreating men’s ammo and kept marching toward Bastogne. As Koehn and the rest of the men entered the town and dug in around the perimeter, they could hear the sounds of battle.

It spread to the south and it was clear the Germans were going to cut the highway and encircle Bastogne. They dug in on Dec. 19. The 506th was on the northeast edge of the ring, south of the village of Foy. The situation was fluid and their lines were thin, in one case a German soldier looking to relieve himself wandered right into the 506th lines and was captured.

On Dec. 21 it snowed, between six and 12 inches fell along with the temperature. It fell below freezing and the winds picked up, the men were freezing and soaked to the bone. Doll Nielsen said Koehn recalled having little ammunition and they were low on fuel during this time.

Koehn held the line against the miserable conditions and the German attacks.

“On the line, the days were miserable and the nights were worse. The shelling was not continuous, the machine-gun fire directed at the Americans was sporadic, but snipers were active throughout the day. At night, the ominous silence would be broken by the nerve-racking hammering of enemy mortars, followed by cries from the wounded and calls to man the positions in preparation for an attack. Then another ominous silence,” wrote Ambrose.

The weather prevented any resupply by air, the only way material was ever going to get to Koehn and the troops while they were encircled. Almost maddeningly, the Americans could see the Germans being resupplied by trucks and there was nothing they could do about it, they lacked artillery and air support.

On Dec. 22 the weather finally cleared enough for C-47s to begin airdropping supplies, Doll Nielsen said Koehn described the air drop as, “the most beautiful sight in the world.”

On the same day the acting commander of the 101st uttered the famous word “Nuts!” in response to the German demand for surrender. His response had to be explained to the German commander.

On Christmas Day, Koehn and his buddies shared a K-ration as their holiday meal. To their relief, Patton’s 4th Armor Division broke through the encirclement and lifted the siege of Bastogne, but the Germans were still held ground in Belgium they had taken during their surprise offensive.

When the encirclement was broke, Koehn and the rest of the 101st were famous. “The legend was aided by . . . daily maps showing one spot holding out inside the rolling tide of the worst American military debacle of modern times,” Ambrose wrote.

The whole of the 101st was awarded a Presidential Unit Citation. “This was the first time in the history of the United States Army that an entire Division had been so honored,” according to the 506th divisional history.

“Pvt. Milo Koehn of Lexington, was among the men of the 101st Airborne Division, who as a complete division, received a Presidential Citation for their defense of Bastogne in the battle of the Belgian bulge,” read a Lexington newspaper clipping, “The citation points out that the 101st, ‘without benefit of prepared defenses, facing almost overwhelming odds and with very limited and fast dwindling supplies, maintained a high combat morale and impenetrable defense despite . . . attacks on all sides.”

Koehn and his comrades work wasn’t done, instead of being relieved, the 101st was thrown into the fight to reclaim the ground which the Germans had taken.

On Jan. 15, 1945, the division fought to gain the town of Noville. By this point the division had been badly mauled, their defense of Bastogne had worn them down by attrition and now they were being thrown into the attack again. There was nothing else with could be done, there were no more reserves to call upon, Ambrose wrote.

By February the 101st had been pulled off the line, they had been fighting like mad since late December to blunt the German advance and then retake the ground. They had suffered casualties.

Koehn himself was wounded twice during the war, earning the Purple Heart both times.

In April, Koehn and the division were moved into Germany after the Ruhr pocket was reduced, it was the fifth country the men found themselves in.

On April 29, the division got a good look at the murderous result of the Nazi ideology, in the foothills of the Alps near Landsberg, the men found a concentration camp. “The memory of starved, dazed men,” 506th member Richard Winters wrote, “leaves feeling that cannot be described and never will be forgotten.”

In May the division got to capture one of the more famous objectives of the war, Hitler’s Eagles Nest in the town of Berchtesgaden. The men got to enjoy themselves drinking Hitler’s champagne. This was their final assignment of the war.

On May 2, 1945 a roster was taken of the whole division, Koehn is shown as still being a member of the Regimental Headquarters Division, which he had been a part of before D-Day.

Milo Koehn returned to the States after his four years of service overseas. He became a carpenter and was a lifelong resident of Dawson County. Koehn had married his wife on Jan. 26, 1943 and they made their home in Lexington after the war. He was a member of the First Presbyterian Church.

In 1971, Koehn became sick and died on Aug. 23 after battling an illness for several weeks. He was 55 years old. Koehn was buried in Greenwood Cemetery with full military rites.

His tombstone bears the marks which indicate he was a private first class in the 101st Airborne Division and served during World War II.

Koehn had fought in some of the most well-known campaigns of the Western Front, fought across the continent of Europe and served with one of the most elite airborne divisions of the entire war.

It’s fitting Ambrose started his book about the 101st Airborne with the immortal words from Shakespeare’s “Henry V.” “From this day to the ending of the world . . . we in it shall be remembered . . . we few, we happy few, we band of brothers,”