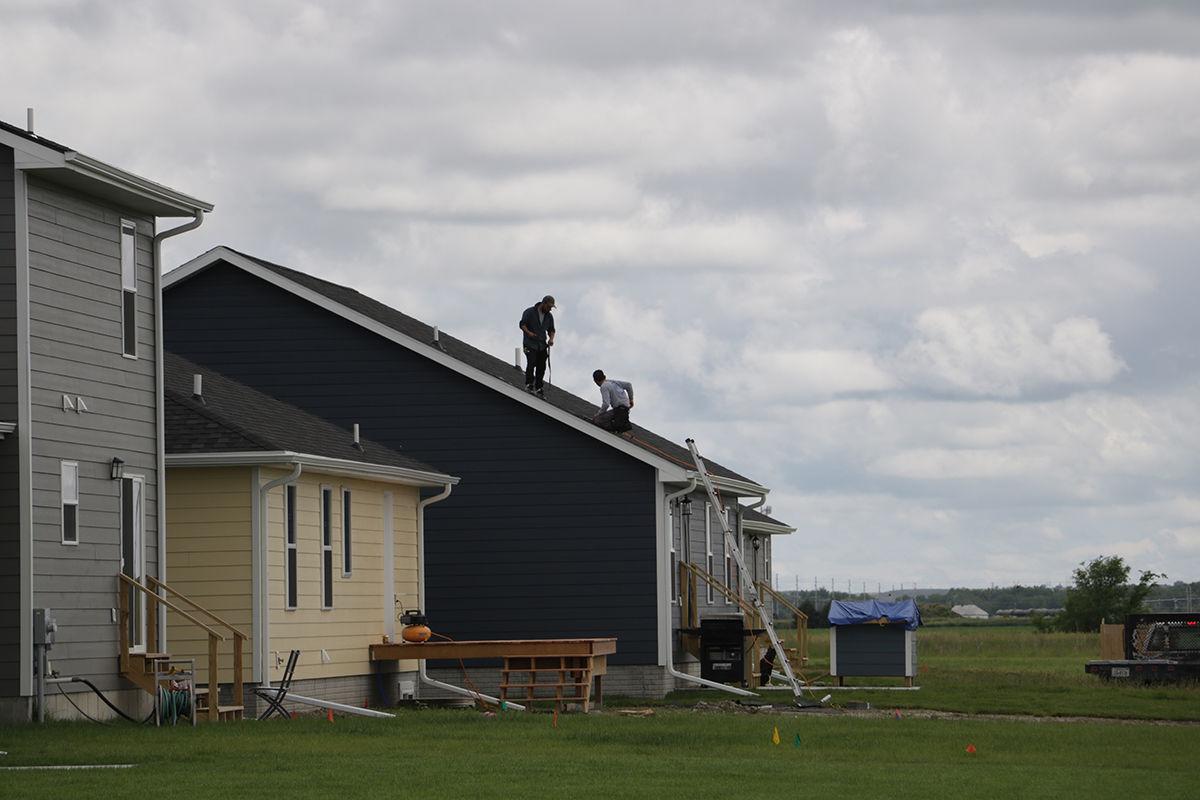 Work continues on a roof on one of the new homes which is part of the Southwest Housing project the City of Lexington has undertaken. Municipalities are having to step into the role private contractors once held. 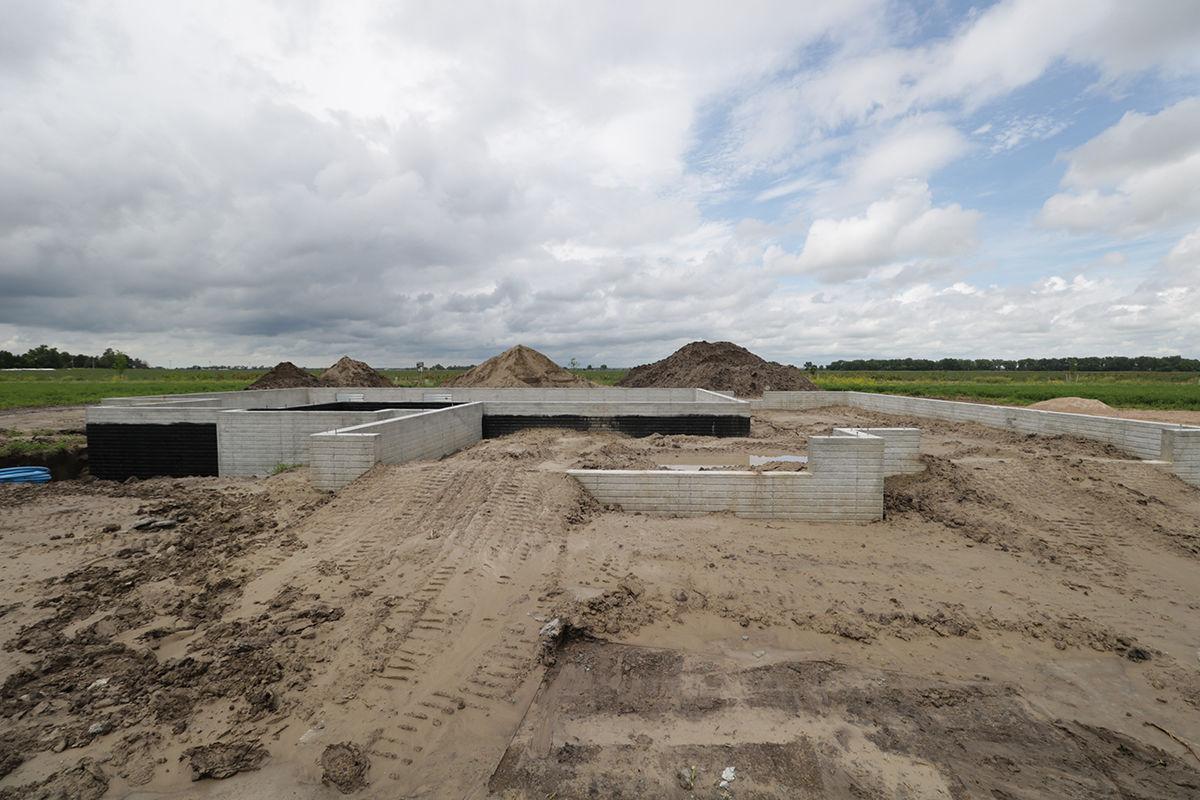 A foundation for a home has recently been built in the Northwest Housing Development. Studies have shown Nebraska as a whole lacks available homes for new workers, making filling open positions difficult.

Work continues on a roof on one of the new homes which is part of the Southwest Housing project the City of Lexington has undertaken. Municipalities are having to step into the role private contractors once held.

A foundation for a home has recently been built in the Northwest Housing Development. Studies have shown Nebraska as a whole lacks available homes for new workers, making filling open positions difficult.

LEXINGTON — Dawson County is lacking when it comes to all types of housing. It has been a common problem across the state of Nebraska. While there are numerous employment opportunities, businesses are having issues filling these because of the lack of affordable homes to buy or rent.

Dawson Area Development Executive Director Andrea McClintic said, “we are short on everything, short on rentals, single family homes, senior living options. The projections show we will continue to be short on housing.”

According to the Dawson County Housing Study, workforce housing is a critical need in the county. Starter homes, consisting of three bedrooms in the $150,000 to $225,000 price range are needed for first time home buyers and moderate income households.

Housing demand amongst the elderly is also increasing. A home repair or modification program is recommended by the study to help elderly persons stay in their home. Future housing options for those 55 years or older could include low to medium density housing such as duplexes, triplexes and townhomes.

McClinitic said there are people who work in Dawson County who commute up to 50 to 60 minutes from towns like Kearney and counties like Furnas, because they cannot find adequate housing. She said there is not a lack of choice, but a complete lack, period. “We legitimately don’t have homes on the market,” she said.

This shortage of housing is apparent in the way Nebraska workers are earning more, but job growth is low. According to a study by the United States Labor Department, from 2014 to 2018, Nebraska ranked third in wage growth, but 40th in job growth.

According to a 2018 Washington Post article, only one in every 184 housing units was for sale across the state in any given month. That makes available homes 1.7 times as scarce than they are in the country as a whole. Put another way, only two other places in the entire country, California and Washington D.C., had a tighter housing inventory than Nebraska during 2018.

The same Washington Post article also cited one of Nebraska’s best resources as one of its biggest hindrances to new housing development, farm land. The article states, “the best land in the world,” hems in many Nebraska towns. The nearby farmland is so valuable, farmers are not willing to sell.

Over the past decade farmers have prided themselves on getting every last bushel of wheat, corn or soybeans out of the hinterland. According to the Agricultural Department, Nebraska has outstripped all but two states in terms of growth in crop acres planted, and the speed at which farmland prices went up.

The result is Nebraska towns are like islands unto themselves and have little room to expand horizontally, into prime farmland.

In 2017, an estimated 5,926 owner households and 2,865 renter households in Dawson County were cost burdened or having housing issues.

According to the study this cost burden is related to the low supply and high demand for housing in Dawson County. The report highlighted two key factors.

The fact most of the new rental housing being developed does not meet the affordability needs of persons or families with the greatest housing need and housing which is available for purchase or rent is severely deteriorated, and in some extreme cases, pose health hazards to those who occupy them.

In the case of housing condition, according to Dawson, Gosper and Frontier County Assessors at least 1,074 units were identified in “fair” condition with 195 being classified as “poor” or “badly worn.”

According to the Nebraska Rural Poll, held by the University of Nebraska – Lincoln, more than a third of all homes in rural areas of the state were built before 1939.

“Such houses are unlikely to feature the amenities that potential buyers find to be desirable, or even essential, today,” said Randy Cantrell, a rural sociologist with the Nebraska Rural Futures Institute, in a 2016 Rural Poll article. “That situation is compounded by the fact that residents over the age of 65 tend to control the largest single share of rural housing. In some communities, members of the baby boom generation and their elders will be found to own 40 percent or more of all housing units.”

These worn homes can partly be attributed to older homeowners who defer home maintenance due to the significant financial burden. If these homes entered the market, a majority of homes could be worn or are poorly suited to those who wish to purchase them. The cost of updating the home would fall on the new home buyer, which likely won’t have the disposable income to make renovations.

The report recommended through the year 2023 the county take an aggressive approach to developing housing for persons and families of low income.

Those trying to rent homes are not having an easy time either, according to the report. There are 23 affordable rental housing programs which were reviewed in Dawson County which provide 627 units.

The issue is these are almost completely full, according to the study, 17 of the rental housing programs are at 90 percent capacity with a waiting list and 12 of these had a current occupancy rate of 100 percent.

The 2018 Nebraska Rural Poll showed 57 percent of people, living in towns of 10,000 or more, were dissatisfied with the cost of housing. According to the Dawson County housing study, Lexington had the highest median value for owner housing which was at $109,300. This is expected to jump up to $124,500 by 2023.

To combat this problem, local economic development groups and municipalities have to take up the burden of providing housing for the community.

“We can’t rely on private developers anymore,” said McClintic, “our local municipalities and economic groups have to take this up.”

One issue is contractors are more concentrated in the cities, where they can work on a larger scale. When they come to work in rural areas, the prices inevitably rise.

Prices can rise more than $30,000 when a three bedroom home is built in central Nebraska, compared to Omaha or Lincoln, according to a 2017 NET article. There is an affordability gap, which many communities now have to fill on their own.

The Northwest Housing Development has been set aside for custom homes, Fagot said there will be three to four more started in July. There are nearly 100 lots ready to be built on, which feature water, sewer and electrical hook ups, they can accommodate basements and lot sizes allow for home between 12,000 and 25,000 square feet.