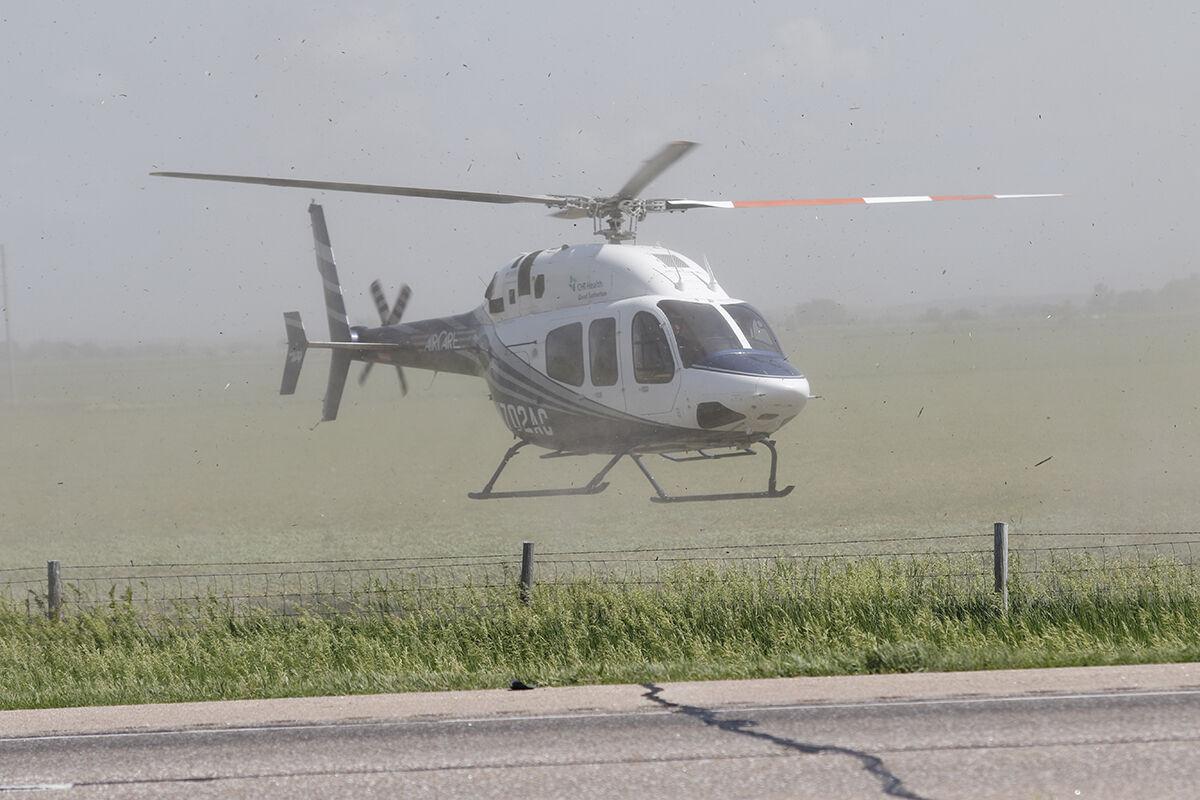 The CHI Good Samaritan Flight for Life helicopter lands in a field north of the accident site on I-80 between Lexington and Overton on Wednesday morning. 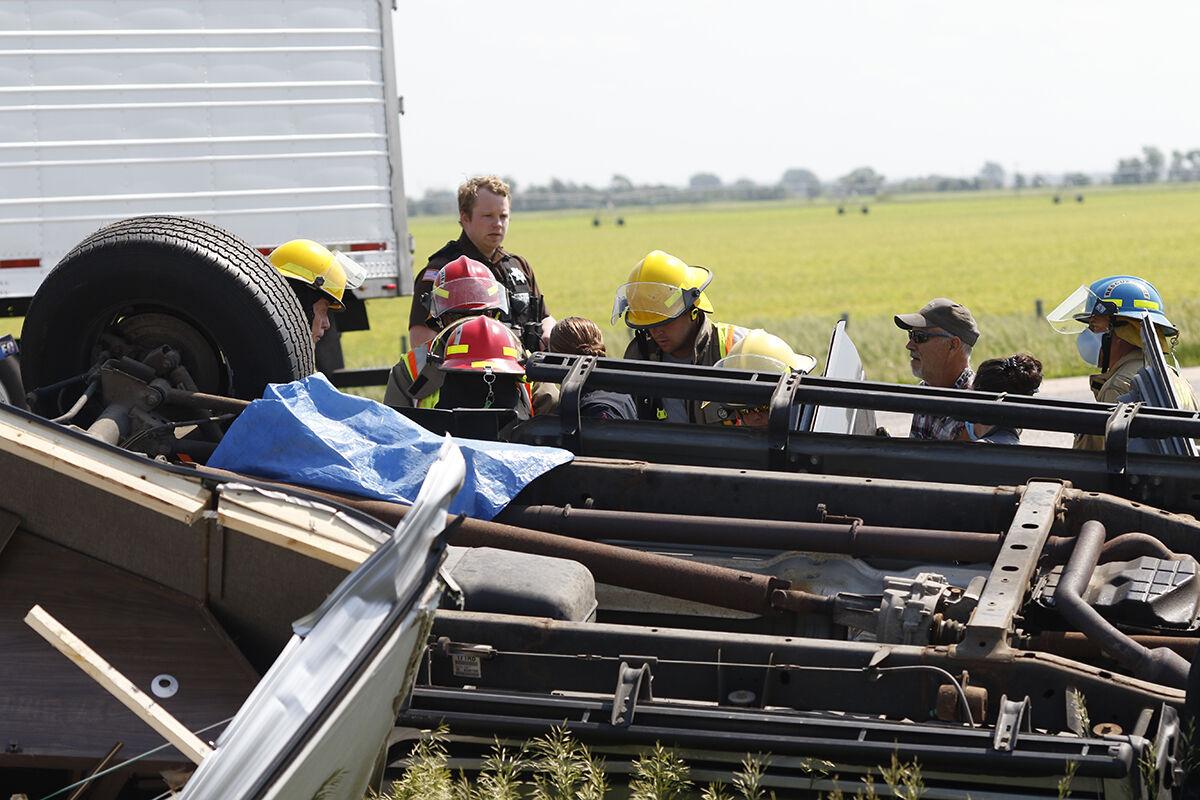 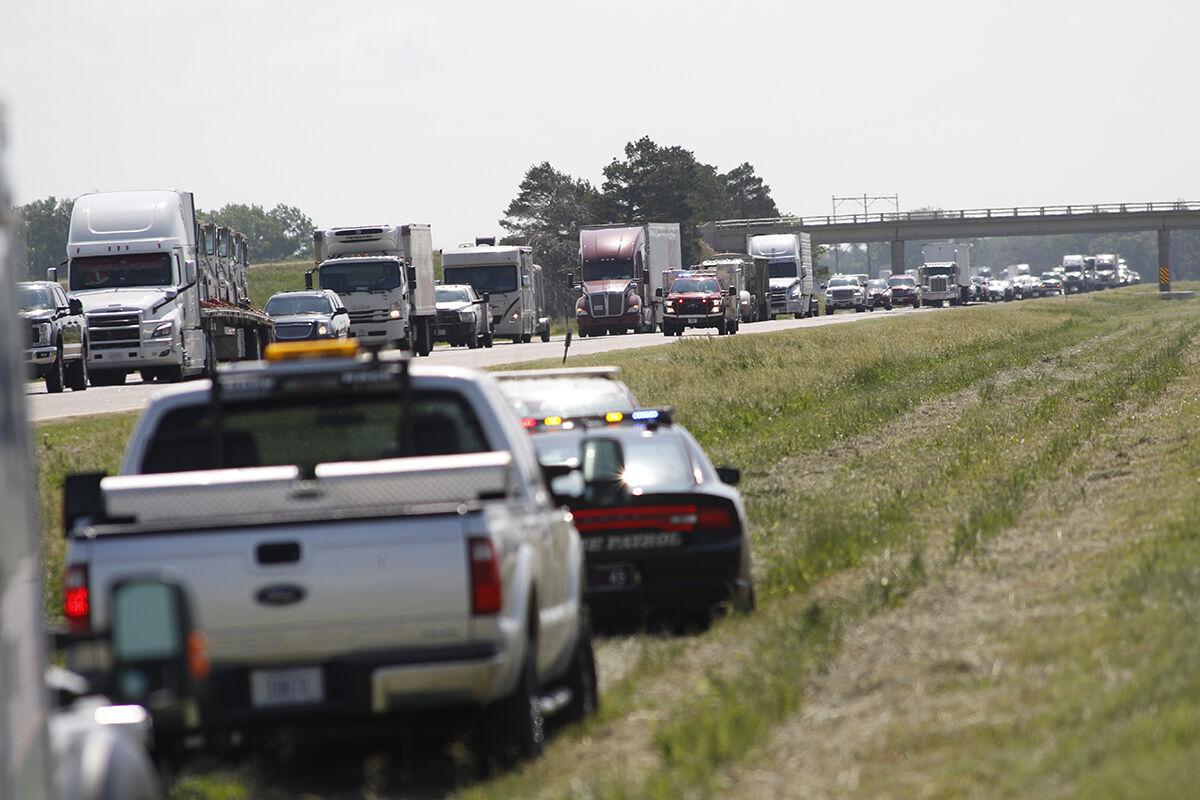 A grass rig with Overton Volunteer Fire and Rescue arrives on scene as westbound traffic on I-80 is at a standstill.

LEXINGTON — A driver was killed and three occupants injured when a pickup pulling a camper rolled into the median on Interstate 80 between Lexington and Overton during the morning of Wednesday, June 9.

At 10:31 a.m. the Lexington Volunteer Fire Department was dispatched to mile marker 243 for the report of an accident with injuries. Priority Medical Transport also headed to the scene.

At the site, a pickup had rolled on to its roof in the median of I-80, the camper it was towing was heavily damaged.

Soon after Lexington firefighters arrived on scene, Overton Volunteer Fire and Rescue was called for mutual aid. The Flight for Life helicopter from CHI Health Good Samarian in Kearney was also dispatched; when they arrived they circled the scene and landed in a field north of I-80.

Westbound traffic on I-80 was temporarily closed, but then was opened to one lane after the helicopter landed.

Lexington ambulances transported two passengers of the truck to Lexington Regional Hospital.  Another was transported by the Flight for Life helicopter to Kearney. The extent of their injuries was not available on scene.

According to Nebraska State Trooper Amanda Gardine, the driver was killed in the accident and was reported deceased on scene. The driver was taken from the scene by Reynolds Love Funeral home after Deputy Dawson County attorney Matt Neher confirmed the time of death.

The Nebraska State Patrol was working to notify the next of kin.

All the occupants of the vehicle had been wearing their seatbelts.

Gardine said the driver overcorrected and the pickup and the camper rolled into the median. She said the wind could have been a factor, as it was blowing from the southwest at 10 mph, gusting up to 15 mph.

The Nebraska State Patrol, Troops C and D, were assisted on scene by the Dawson County Sheriff’s Office and the Nebraska Department of Transportation.

No shutdown for Florida amid virus concerns

No shutdown for Florida amid virus concerns

LEXINGTON — Two Lexington men have been charged with first-degree murder in the July 6 drive-by shooting of Marcus Keyser.

LEXINGTON — A Cozad man has pleaded no contest to a sixth driving under the influence offense.

LEXINGTON — Two Lexington males have been arrested in the drive-by shooting death of Marcus Keyser that occurred on July 6.

Driver inattention now determined the cause of I-80 semi accident near Overton, citation pending

OVERTON — A semi driver initially claimed she fell asleep at the wheel, but the Nebraska State Patrol has determined this was not the case whe…

LEXINGTON — The Lexington Veterans Pavilion project has received another large donation, this time from Orthman Manufacturing.

LEXINGTON — To continue the process of housing redevelopment in Lexington, the city council conveyed more real estate to the Community Develop…

JOHNSON LAKE — The three-year-old girl who drowned in Johnson Lake during the evening of Wednesday, July 21 has been identified.

The CHI Good Samaritan Flight for Life helicopter lands in a field north of the accident site on I-80 between Lexington and Overton on Wednesday morning.

A grass rig with Overton Volunteer Fire and Rescue arrives on scene as westbound traffic on I-80 is at a standstill.